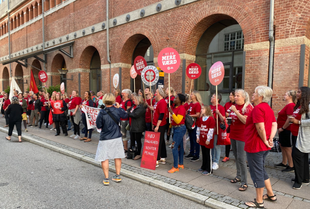 On 27th August 2021, the Danish Social Democrat government passed an emergency law to halt the longest strike in Denmark's history. Since June 2021, more than 5,000 nurses went on strike over a wage increase. More specifically, they asked for a fairer increase in wages than the 5,02 per cent over three years, which was agreed upon between social partners.

In a historical ruling that intervenes on a constitutionally granted right to freedom of association, during September 2021 the Danish Supreme Court upheld the decision taken previously by the Copenhagen City Court and the High Court, banning the street gang Loyal to Familia (LTF). In light of its criminal purpose, the Supreme Court claims that the limitation of freedom of association is justified in this specific case. However, doubts persist on the possible implications for the activity of other types of organisations. In fact, this unprecedented ruling may have repercussions for the way the Danish Constitution will be interpreted in the future.

On 27th August 2021, the Danish Social Democrat government passed an emergency law to halt the longest strike in Denmark's history. As reported on previously by the CIVICUS Monitor, more than 5,000 nurses went on strike on 19th June over a wage increase. More specifically, they asked for a fairer increase in wages than the 5,02 per cent over three years, which was agreed upon between social partners.

The extraordinary measure taken by the government is unusual in the Danish context, where agreements between social partners over working conditions are traditionally reached through collective bargaining.

The Employment and Equality Minister, Peter Hummelgaard Thomsen, told the press that the government's action was necessary since the social partners could not reach a compromise. On the other hand, the representative of the main nurses’ trade union, Grete Christensen, declared that she is “deeply disappointed” by the government's decision, as it decided to enforce the 5.02 percent increase over a three-year period, which was rejected by the workers.According to the union’s representative, by doing so the government failed to take political responsibility for a long-needed improvement in nurses’ working conditions.

The Danish Health Authority estimated that the strike has delayed around 35,500 surgeries and that it could take as long as two years to reduce the extraordinary backlog.

Following the governments intervention, nurses staged strikes in the first week of September 2021 for an hour each day, in breach of their collective bargaining agreement. In response to this, on 9th September 2021, a Labour Tribunal court ruled that the nurses must return to work. However, some nurses who continued to stage hourly protests were fined between 56 and 86 kroner ( 8-12 Euros) per hour of missed work.

In a statement, the Danish nurses’ union, Dansk Sygeplejeråd (DSR) distanced itself from the remaining strike action.

“We have informed our members of the labour court decision and have once again stressed that the strikes in breach of the collective bargaining agreement are something we must clearly distance ourselves from, and they must stop now,” - DSR chairperson Grete Christensen.