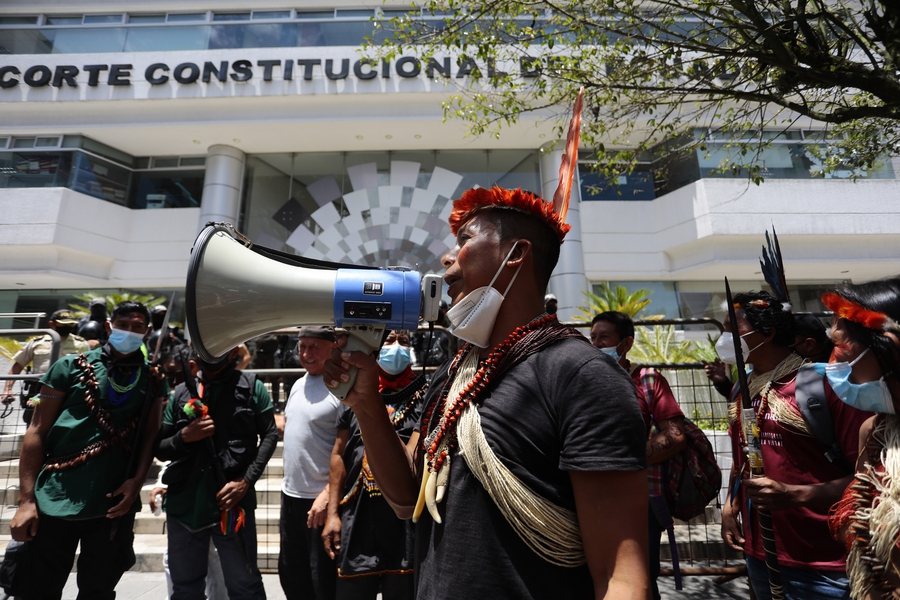 On 18th October 2021, President Guillermo Lasso decreed a state of emergency for 60 days to confront rising crime and violence in Ecuador, saying the military and police would take to the streets to provide security. The announcement came after a shocking prison massacre that left over a hundred people dead at the end of September 2021. According to political analysis, murder rates in Ecuador have surged as gangs compete for control of drug trafficking routes.

The state of emergency gives authorities the power to restrict the freedom of movement, assembly and association. However, protesters have continued to demonstrate even with the measure, as detailed in the ‘Peaceful Assembly’ section of this update. The country’s Ombudsperson’s Office released a statement after the state of emergency was announced, calling on authorities to beware of human rights violations that can take place during exception periods.

Threats and attacks on the Shar Arutam People

In particular, they expressed concern about abuses by Canadian company Solaris Resources Inc., owners of the Warintza Project, which has been defied by communities for over 13 years. The Governing Council’s letter said the company has promoted community division, intimidation and death threats against leader Josefina Tunki.

On 9th September 2021, in light of these reports, civil society organisations in the Alliance of Organisations for Human Rights and the Caminantes Anti-mining Collective presented a public complaint demanding respect for the Shuar Arutam People’s right to self-determination. They also said that, as infrastructure works began in early September, there was an escalation of tension and violence which threatened the physical integrity of the communities at risk in the region, particularly the Maikiuants community.

On 13th September 2021, four Afro-descendant farmers and environmental defenders were sentenced to pay US$151,000 to Energy & Palma, which manages an oil palm plantation in the province of Esmeraldas. The company claimed that a peaceful march in the Barranquilla de San Javier de Cachaví commune in 2019 resulted in losses to the harvest that year. Judge Fernando Saldarriaga of the Multicompetent Unit of the San Lorenzo canton ruled in favour of the company in a lawsuit which initially sought over 300,000 in compensation.

This Afro-Ecuadorean commune’s leaders have resisted Energy & Palma’s presence, claiming that the company occupied part of their territory through a process that lacked transparency. The defenders also say the company's activities have affected environmental resources on which members of the commune depend, due to deforestation in the Bosque del Chocó and contamination of water sources.

On 18th October 2021, several Indigenous communities from Ecuador's Amazon filed a lawsuit against the government to halt plans by President Guillermo Lasso to increase oil extraction in the country, calling the expansion efforts a "policy of death." Hundreds of Indigenous elders, youth, and leaders arrived in Quito on the day the suit was filed, having journeyed from their communities deep in the Amazon rainforest. Indigenous leaders are asking the Constitutional Court to nullify Executive Decree 95, which seeks to double the country’s oil production to one million barrels per day by deregulating the operational processes in the oil and gas industry. The Indigenous communities also plan to file another lawsuit to halt the implementation of another decree which would facilitate mining concessions in the country.

"The Ecuadorean government sees in our territory only resource interests," said Waorani leader Nemonte Nenquimo, in remarks outside the court. "Our territory is our decision and we'll never allow oil or mining companies to enter and destroy our home and kill our culture."

On 21st September 2021, Ecuador’s Confederación de Nacionalidades Indígenas del Ecuador (Indigenous People’s Confederation - CONAIE) presented to the National Assembly a list of 260 leaders and protesters detained, demanding their release and amnesty. Most cases refer to arrests of people who joined mass demonstrations in October 2019 and of Indigenous and environmental leaders who opposed mining in Buenos Aires.

CONAIE president Leonidas Iza pointed out that these people were criminalised for their activism, and said that the justice system should not be used to intimidate but to guarantee rights. He called on legislators to support the amnesty request, as part of a reconciliation effort.

In a related development, on 2nd October 2021 Indigenous leader Carmen Tiupul, vice president of the Confederación del Movimiento Indígena de Chimborazo (Confederation of Chimborazo’s Indigenous Movement - Comich), was sentenced to two years in prison and five thousand dollars as reparation payment for “paralysing public services.” She was accused by the Public Prosecutor’s Office of allegedly participating in the takeover of a government building during protests in 2019.

In July 2021, dozens of teachers with Ecuador’s National Union of Educators (UNE) went on hunger strike demanding the implementation of the Organic Law of Intercultural Education (LOEI), approved by legislators in March 2021. The constitutionality of the law, which reforms the country’s education system, was challenged in the Constitutional Court by the Ecuadorian Social Security Institute (IESS).

The teachers’ hunger strike started on 12th July 2021 with UNE members from four provinces and was eventually joined by 80 teachers in 11 provinces. Their mobilisation came to an end on 2nd August 2021 after the Constitutional Court ruled in favour of the education reform. However, articles referring to salary and retirement of educators were sent back to the National Assembly as the Court considered they did not take fiscal feasibility into account.

In a Twitter message, UNE celebrated the decision, saying: “After 32 days of hunger strike, we triumphed! The whole of LOEI is constitutional. The students, teachers, parents, and the education community won.” The union also called on all sectors to remain united and vigilant until the law’s enforcement.

On 2nd August 2021, the coalition Alliance of Organisations for Human Rights issued an alert warning to the presence of military and police in the rural parish of La Merced de Buenos Aires, threatening the right to protest and peaceful resistance of its population. According to the coalition, no official justification was provided for the militarisation, but civil society groups expressed concern that it was a response to community resistance to mining.

Since 2020, residents of La Merced de Buenos Aires in the Imbabura province have been denouncing the “Imba” copper mining concession as illegal and illegitimate because of a lack of community consultation. As previously reported on the CIVICUS Monitor, environmental and human rights defenders of the parish maintained a protest for more than 60 days against mining activities by Hanrine. The Alliance also said in their alert that there are at least seven criminal investigations open against members of the community and a local councillor.

On 15th September 2021, thousands took to the streets in Quito to protest against policies promoted by the government of President Guillermo Lasso. The mobilisation brought together groups such as labour unions, student and rural workers’ movements and Indigenous communities who called for measures to address people’s pressing needs and to guarantee their basic rights. The groups made various demands, including the implementation of the education reform, the rejection of efforts to change labour laws and of policies leading to a rise in fuel prices.

During the demonstration, protesters gathered at the Ecuadorian Social Security Institute (IESS) building to march towards the Santo Domingo Square. The following day, on 16th September 2021, Minister of Government Alexandra Vela met with union representatives to initiate a dialogue process with social movements.

Similar protests took place on 26th October 2021, convened by Indigenous organisations and social movements to protest a rise in fuel prices. Protesters blocked roads in five provinces and clashes between demonstrators and law enforcement were reported in Quito. While the protests were mostly peaceful, police used tear gas to disperse a group of demonstrators in the capital who had allegedly engaged in vandalism. Ecuador’s Ombudsperson also reported receiving information on the use of tear gas against protesters in the Imbabura province. They also said they were following cases of Indigenous leaders detained in Pujilí, Cotopaxi, and of a journalist attacked by police while covering protests. Government authorities reported that 18 people were detained for blocking roads.

Attacks and threats against journalists and media workers

Between August and September 2021, press freedom group Fundamedios registered 34 violations of freedoms of expression and the press. These include physical aggressions, threats, judicial proceedings, restrictions to online civic space and obstacles to information access. Online attacks were recorded against local news outlet Fundación Mil Hojas, whose webpage was off the air for several days, and against regulatory agency Communication Council, whose systems were reportedly affected by ransomware.

In one example, on 11th August 2021 Wilson Cabrera, Teleamazonas correspondent in Morona Santiago and director of the journalistic platforms Conectados and Verificado, was threatened through a WhatsApp message. The journalist was sent an intimidating message together with a video of a person loading a gun, seemingly with live ammunition. As reported by Fundamedios, the threat referenced a vehicle theft that Cabrera had reported.

Separately, the Committee to Protect Journalists reported that journalist Virginia Suárez, who covers politics in the central town of Ventanas for digital news outlet Digital Vir’s, received death threats on 24th August 2021. She said she was hosting a live programme, interviewing residents about their complaints about an effort by town officials to expropriate land to expand the cemetery, when a commenter wrote: “You probably want to be found in the cemetery as well, with your mouth open and full of flies.” Days later, a note was left on the window of her car with a similar threat. The journalist said she filed a complaint with authorities.

In another case, on 25th August 2021 the home of journalist Mario Pinto of MP Noticias was attacked with an explosive device. According to neighbours, an individual on a bicycle approached the journalist’s house and threw a stick of dynamite on the balcony. The communicator had reportedly faced a similar attack in 2020.

Debate on reform of communication law

As reported previously on the Monitor, on 27th May 2021 President Lasso sent to the National Assembly a legislative project for a new Organic Law on Free Expression and Communication. Several social organisations warned that the bill would imply setbacks in rights, promoting an individualistic notion of freedom of expression.

In August 2021, the International Relations Commission of Ecuador’s National Assembly decided to unify the government’s proposed bill with another legislative proposal on freedom of expression, which had been presented by lawmakers together with civil society organisation Fundamedios. The Commission’s members said that the two bills had complementary aspects and that they would work on a proposal joining the two texts.

In addition to these proposals, three other bills meant to reform the current Organic Law of Communication were presented to lawmakers in August 2021: a proposal driven by the community media sector, presented by the Frente Amplio por una Comunicación Democrática, Comunitaria y Ciudadana; a proposal by former journalist and legislator with the Alianza UNES party, Marcela Priscila Holguín Naranjo; and a third project led by private media association Asociación Ecuatoriana de Radiodifusión (AER).

According to OBSERVACOM, the issues at stake in the reform of the law include a discussion on regulation or self-regulation, the maintenance of the Communication Council, the right to reply and rectification, mechanisms for protection of journalists and the percentage of the radioelectric spectrum reserved for community media.