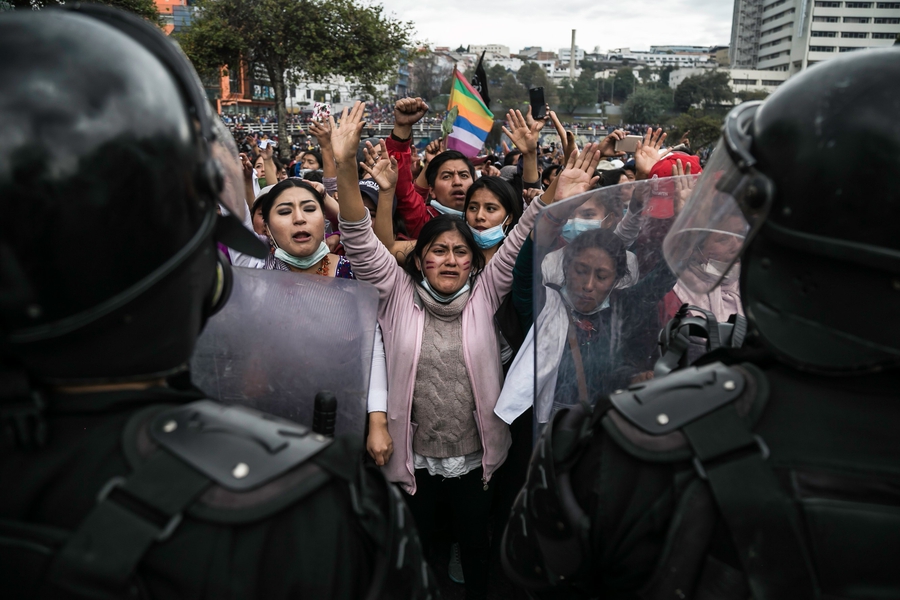 On 1st October 2019, President Lenin Moreno announced an economic package meant to boost Ecuador’s economy. The measures were rejected by indigenous communities, unions and other groups, leading to mass protests. As previously reported on the Monitor, many social movements have resisted Moreno’s austerity policies, imposed as part of a USD 4.2 billion agreement with the International Monetary Fund (IMF) signed in March 2019.

Announced among October’s set of measures, the withdrawal of fuel subsidies, which have been in place for decades, prompted particular outrage. The removal of these subsidies, opponents argue, will raise not only transport prices but also production costs and prices of many other goods. On 3rd October 2019, unions and other organisations in the transport sector announced a national strike. By 4th October 2019, President Moreno had declared a state of emergency. In the following days, more sectors joined in the protest. Several indigenous communities marched from their territories toward Quito, bringing thousands to the streets to protest the government’s measures.

As demonstrations escalated, the police brutally repressed the protests and detained hundreds of protesters. Some demonstrators engaged in looting and violence, and groups of protesters seized control of three oil production facilities. On 8th October 2019 a curfew was imposed and government administration was temporarily moved from a besieged Quito to Guayaquil.

On 9th October 2019, the Inter-American Commission for Human Rights (CIDH) issued a press release citing concerns about the excessive use of force during these protests. At least 477 protesters had been detained, two people killed in unexplained circumstances and 31 journalists attacked. According to reports received by CIDH, several protesters were injured, including from the indiscriminate use of tear gas by the police. Attacks on journalists by both security forces and demonstrators were reported.

On 13th October 2019, the government withdrew the unpopular economic measures. The announcement was made following a meeting with CONAIE (Confederation of Indigenous Nationalities of Ecuador) mediated by the United Nations and Ecuador’s Episcopalian Confederation. Negotiations were set to continue, however, on a new package of economic measures.

According to Ecuador’s Ombudsman Office, during the ten days of protest, eight people were killed, 1,340 were injured and 1,192 detained. Indigenous peoples were particularly targeted by security forces and negatively portrayed by pro-government media. President of CONAIE Jaime Vargas’ assessment differed from official statistics, accounting for ten people killed and over 2,000 injured.

On 20th October 2019, a mission from the Office of the High Commissioner for Human Rights arrived in Ecuador to investigate human rights violations during the protests.