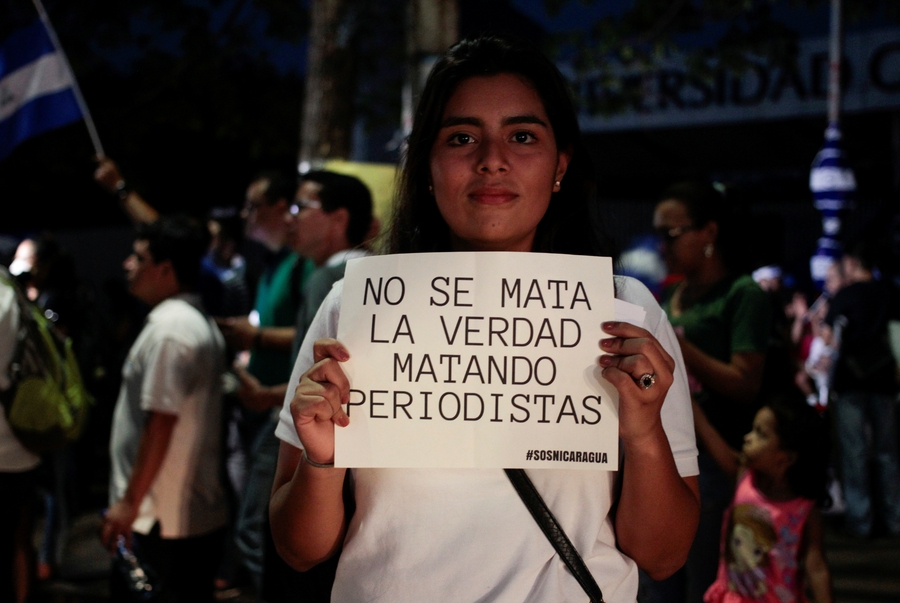 Protest in Managua on World Press Freedom Day, May 2018. (Photo by REUTERS/Oswaldo Rivas).

18th April 2021 marked the third anniversary of Nicaragua’s widespread socio-economic protests of 2018, which sparked an enduring human rights crisis. In these three years, over 108,000 Nicaraguans fled the country, in many cases seeking protection from violence and political persecution.

Local civil society reported increased police harassment of human rights defenders and opposition leaders in the context of this milestone, with over 300 incidents of human rights violations and civic space restrictions recorded around the date.

Repression on 3rd anniversary of crisis

Civil society in Nicaragua reported an increase in violence against human rights defenders and opposition leaders around the third anniversary of the April 2018 mass demonstrations. According to Monitoreo Azul y Blanco, there were 382 reports of intimidation, harassment, detention and other such incidents between 15th and 20th April 2021. As reported by La Prensa, at least 14 people detained in this context remained in detention as at 22nd April 2021.

According to the Observatory for the Protection of Human Rights Defenders, at least 75 women human rights defenders reported facing harassment in the period. The president of victims’ organisation Asociación Madres de Abril (Mothers of April Association - AMA), Francys Valdivia Machado, was detained in Estelí on 20th April 2021. At least four other AMA members were also arbitrarily detained amid a ceremony in memory of Francys’ brother, Franco Valdivia Machado. They were all released after facing alleged threats from the police. The Observatory also reported that they were subject to police brutality during their arrest. Similarly, other AMA members were harassed while they left an event at the Centro American University in Managua.

In the period, there were also several cases of human rights defenders being arrested and convicted under alleged fabricated charges. These include, for instance, the following cases:

On 27th April 2021, the police detained an activist who had been in exile for almost three years as he returned to Nicaragua. According to his family, Yaser Morazán was detained at the airport and reportedly interrogated for three hours. He had fled Nicaragua in 2019 after receiving threats from government supporters.

On 26th April 2021, Nicaraguan authorities released four political detainees from Ometepe Island. Among those released were four men and a trans woman, Celia Cruz, who had been detained in a prison for men for over a year. Cruz is an opposition leader who was arrested alongside other activists on the island in 2020, after broadcasting a video showing police violently repressing a group commemorating the second anniversary of the political crisis. She has denounced the cruel treatment and discrimination against trans women in Nicaragua’s penal system. In an interview, she said:

Speaking to news media, Cruz also said police officers continue to monitor and harass her. According to the attorney following her case as well as that of another political prisoner, Enyel Lopez, they were released without any information or documents that would let them know the legal terms of their release – leaving them in a precarious legal situation.

On 12th April 2021, Nicaraguan lawmakers introduced reforms to the electoral law to ban the participation of political parties and candidates who receive foreign funding. Legislators from opposition parties argued this would affect candidates who receive donations from Nicaraguans living abroad, further restricting competition in elections. The proposed changes build on laws on “foreign agents” and “traitors to the homeland” previously approved in the National Assembly.

Opposition leaders condemned the reform, also highlighting that it would limit auditing of elections, for example by excluding electoral observers and creating a more limited “chaperon” role.

Waving Nicaragua’s flag, evangelical pastor Henry Aguilar held a one-person protest on 15th April 2021 in Managua. Aguilar commemorated the anniversary of the crisis and called on opposition organisations to take to the streets in protest despite the State repression. While the pastor’s protest was allowed without intervention, local civil society reported days later that Aguilar’s house had been besieged by police.

In addition, citizen journalist Alberto Miranda with digital media Literal was harassed and attacked as he tried to cover the demonstration. Miranda said that a group of paramilitary civilians and police officers violently took his phone and deleted images of the protest. The reporter was also threatened and punched in the chest.

On 27th April 2020, the Inter-American Press Association (IAPA) published a report on freedom of expression in Nicaragua, asserting that three years after the mass protests the press freedom situation and the political situation in the country have worsened. The organisations highlighted the continued harassment of journalists, political pressure on independent media and confiscation of news outlets’ assets. IAPA also noted the restrictive laws approved at the end of 2020 and beginning of 2021 which place significant constraints on freedom of association and expression.

The organisation also issued a resolution on “Non-interference and freedom of association” which, among others, includes the case of Nicaragua. This resolution condemns Nicaragua’s law on foreign agents, saying that the legislation criminalises the activities of organisations dedicated to monitoring and promoting freedom of expression, citizen participation, religious freedom, the right of association and human rights.

In a separate development, journalist and human rights defender Ileana Lacayo died on 29th April 2021 in Bluefields. According to news media, she experienced COVID-19 symptoms and her health deteriorated quickly. Lacayo was a member of the executive committee of Independent Journalists and Communicators of Nicaragua (PCIN) and a fierce critic of human rights abuses and the repression of the press in Nicaragua. Because of her reporting, she faced harassment and spent time in exile. On 3rd May 2021, a group of protesters organised an “express demonstration” in honour of her memory and activism.