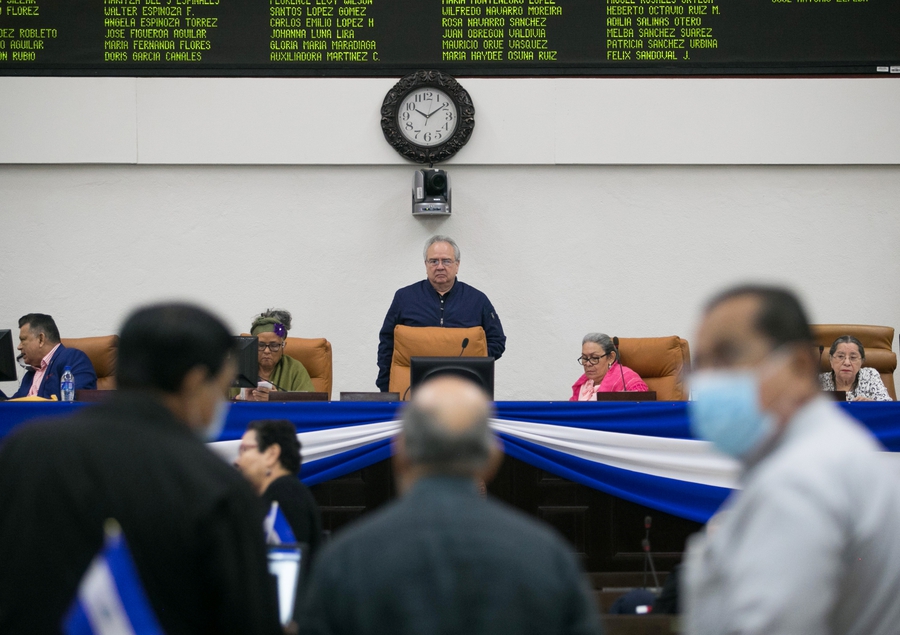 National Assembly during parliamentary session on the approval of the Foreign Agents Law. 15 October, REUTERS/Oswaldo Rivas.

On 15th October 2020, Nicaragua’s lawmakers approved the “Foreign Agents Law” which expands government powers to control and muzzle civil society. The legislation requires civil society organisations that receive funding from abroad to register as “foreign agents” and submit monthly reports on their use of resources. These organisations are also prohibited from political participation.

Several civil society organisations signed a statement warning that this legislation, along with the new law on cybercrimes detailed under the ‘Expression’ section of this update, represent an alarming escalation in the repressive environment in Nicaragua. In early December 2020, a group of civil society organisations presented constitutionality challenges to the legislation on foreign agents to Nicaragua’s Supreme Court. Among the organisations leading the legal challenges are the women’s organisation Movimiento Autónomo de Mujeres, and dissident organisations Movimiento Renovador Sandinista (MRS) and Unidad Nacional Azul y Blanco. A representative of Unidad Azul y Blanco commented on the lawsuit, saying:

“We are filing this unconstitutionality appeal against the Foreign Agents Law because it is an absurd law. It violates human rights and intends to restrict the possibility of continuing to work for Nicaragua, and particularly to make it difficult and impossible for civil and political organising that is a civil and political right protected by the Political Constitution.”

Attacks and intimidation of HRDs

On 7th December 2020, the Mechanism for the Recognition of Political Prisoners released a list of 110 political prisoners who remain incarcerated in Nicaragua. According to their data, 106 of these were men and 4 were women – one of whom is a trans woman detained in a men’s penitentiary. 85 political prisoners had already been convicted and sentenced. The organisation also denounced cases of ill-treatment and sexual assault faced by political prisoners as well as harassment of family members who visit them.

In a related case, on 26th November 2020 a relative of human rights defender John Cerna visited him in prison and reported that the young defender showed serious signs of physical and psychological torture. According to Frontline Defenders, Cerna has also lacked adequate medical attention to treat his epilepsy. The defender is a prominent student leader who has been actively involved in pro-democracy activism in Nicaragua. He was detained in Managua in February 2020 on an allegedly fabricated charge of trafficking narcotics. Cerna was convicted in May 2020 and was transferred to a maximum security cell on 16th September 2020 after denouncing detention conditions. On 2nd November 2020 the Inter-American Commission on Human Rights granted precautionary measures to John Cerna and 40 other political detainees in Nicaragua.

In a separate development, on 8th November 2020 several leaders of opposition coalition Coalición Nacional denounced that police officers prevented them from attending a mass in Jinotepe, Carazo department, in honour of political prisoners and protesters killed in Nicaragua’s political crisis. Dissidents reported that police patrols were stationed in front of their houses and that officers informed them that they would not be allowed to leave.

Civil society organisation Monitoreo Azul y Blanco released a report on human rights in Nicaragua, registering over 200 violations in November 2020. According to the report, there were 149 cases of intimidation of human rights defenders, journalists and dissidents. The organisation also noted incidents of harassment and attacks on journalists covering the impacts of the Eta and Iota hurricanes. Local media outlets also reported that authorities obstructed the work of some humanitarian centres providing support to affected families.

Members of opposition movement Coordinadora Universitaria Por la Democracia y la Justicia (University Students’ Coordination for Democracy and Justice - CUDJ) denounced that police and paramilitary groups assaulted at least 20 people to prevent their participation in a protest. On 29th October 2020, the organisation organised the third edition of a “Marcha de la Burla” in which students dress up and satirise authorities in protest against the government. According to the CUDJ, five people were beaten and 15 had belongings stolen, such as protest accessories, when attempting to join the event. A journalist from VOA said he was prevented from entering the hotel where the protest was taking place.

On 25th November 2020, the International Day for the Elimination of Violence against Women, women’s groups in Nicaragua organised events to denounce violence against women. In a statement, human rights group Colectivo de Derechos Humanos Nicaragua Nunca+ said there were at least 69 femicides in Nicaragua in 2020. As reported by La Prensa, for the third consecutive year Nicaraguan activists could not mobilise on the streets in a march – as would have been typical to commemorate the date. According to a representative of collective Red de Mujeres contra la Violencia (Network of Women Against Violence - RMCV), this year the women’s groups decided not to expose advocates to further state violence, following several years of repression by authorities during their protests.

On 27th October 2020, Nicaragua’s legislators approved a Special Cybercrimes Law which has been described by experts as a threat to freedom of expression. The legislation was introduced at the end of September 2020 by deputies from the government caucus, and defines and establishes punishments for a series of crimes committed through the use of information and communication technologies (ICTs).

According to an analysis by a group of civil society organisations, the law creates multiple broad, vague and imprecise offences — such as “espionage,” “security violations,” “transfer of reserved public information,” and “propagation of fake news,” among others — that could be used to criminalise legitimate and daily actions carried out through ICT, as well as various forms of online expression. In this regard, the legislation inhibits reporting and could lead to punishment, for example, for the creation and reproduction of memes and parodies. The law was nicknamed “Gag Law” by civil society and the press in Nicaragua, who call it an attempt to control and censor free expression online.

Intimidation and attacks on journalists

In its monthly report of press freedom in Nicaragua, Fundación Violeta Barrios de Chamorro registered 42 violations in October 2020, including 25 assaults and intimidation of journalists and nine cases of power abuse by authorities. The report also highlighted that state agents were responsible for 86% of the violations reported and non-state actors, particularly government-supporting paramilitary groups, led the remaining 14%.

In one of the cases reported by the civil society organisation, journalist Carlos Lacayo said police officers had begun harassing him after he denounced being beaten by officers while covering a meeting of an opposition group. The foundation’s report also registered several cases of journalists’ houses being besieged by police patrols.

In a separate development, on 18th December 2020 journalist Carlos Fernando Chamorro convened a press conference in front of the offices of outlets Confidencial and Esta Semana, which were seized by authorities in December 2018, to demand an end to hostility toward the press. As reported by Confidencial, Chamorro was explaining a petition presented by the Institute of Race and Equality to the Inter-American Commission on Human Rights (IACHR) on the restriction of press in Nicaragua, when two patrol cars suddenly showed up with riot squads and they cordoned off the offices’ entrance.