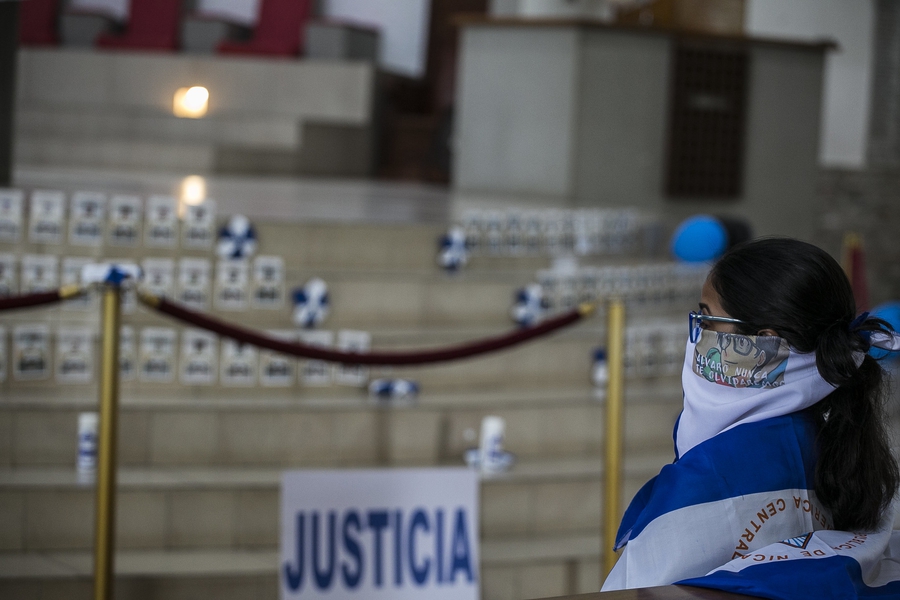 18th April 2020 marked two years since nationwide socioeconomic protests and their brutal repression that launched an enduring a human rights and political crisis in Nicaragua. In the context of the crisis, at least 328 people have been killed, around 2,000 injured and over 700 detained. Over these two years, more than 100,000 people in Nicaragua have sought asylum abroad, reportedly fleeing persecution and human rights abuses, according to the UN refugee agency (UNHCR). Around this date, there have been several reports of increased repression of political dissidence, as detailed in the “Association” section of this update.

In another concerning development, newspapers and human rights organisations cast doubt on the information published by Nicaragua’s government in the context of the coronavirus (COVID-19) pandemic. News agency Reuters has reported that Nicaraguan hospital wards are packed with patients suffering respiratory problems, while official figures counted less than 30 cases until 18th May 2020. National and international organisations have denounced that the country has ignored policy advice from health experts, failed to provide transparent information on the situation in the country and that state authorities have promoted large gatherings, putting the population at risk. Some health professionals have reportedly been dismissed for expressing criticism of the country’s response, as detailed in the “Expression” section of this update.

Nicaraguan human rights organisations reported increased police repression during the weekend of 18th and 19th April 2020, as the country commemorated the second anniversary of the protests for socioeconomic rights of April 2018. The Inter-American Commission on Human Rights (IACHR) said that, in the context of the anniversary, it received information of 138 cases of harassment or surveillance, 10 house raids, 11 direct threats, 16 attacks and 39 arbitrary detentions by police and parapolice forces.

On 18th April 2020, political dissident Félix Lacayo was killed in San Carlos, Río San Juan. The Movimiento Campesino de Nicaragua denounced the killing, saying that Lacayo was well known in the municipality for his opposition to the government and that local residents suspect it may have been an extrajudicial killing.

Members of civil society organisation Asociación Madres de Abril (Mothers of April Association - AMA) have faced increased violations since 15th April 2020. While mourning the murders of their family members, several members of the organisation were subjected to police harassment, sieges and attacks on their homes, and the violation of their right to freedom of movement. AMA is one of the key entities that emerged in the context of Nicaragua’s political crisis, when mothers and family members of people killed organised to demand justice, truth and reparations for crimes against humanity. Regional human rights network IM-Defensoras condemned the attacks and called on the international community to acknowledge and sustain these mothers’ quest for justice and to keep an eye on the escalation in repression, which, two years after the beginning of the crisis, is resurging.

Human rights advocates have denounced increased police repression in Esquipula, Ometepe island, since 19th April 2020. According to local news media, tension in the region began after police intervened when a group of young people on the street hoisted a blue and white flag, considered a symbol of the country’s dissident movement. The police published a statement claiming that the group had been intoxicated and had attacked neighbourhood houses with stones. Repression continued on 20th April 2020, with police forces clashing with local residents, reportedly firing gunshots, throwing tear gas and raiding houses.

As informed by the Inter-American Commission on Human Rights (IACHR), on 21st April 2020 at least two people in the community had been injured with shotgun wounds, one injured from a beating and nine detained. Three police officers were also injured. On 2nd May 2020, Freddy Navas of the Movimiento Campesino de Nicaragua (Nicaragua’s Peasant Movement) published a video denouncing that militarisation of the island continued and that local residents have been subjected to harassment and intimidation in this period.

In the context of the COVID-19 pandemic, human rights organisations expressed concern about the conditions of Nicaragua’s penitentiary system for persons deprived of freedom. As previously reported on the Monitor, former political prisoners have denounced facing ill-treatment, lack of medical attention and medication, and poor prison conditions while detained. On 16th April 2020, Amnesty International urged Nicaragua’s authorities to guarantee sanitary and health conditions for the country’s prison population, as local organisations denounced the lack of information and protocols for the penitentiary system in the face of the pandemic.

On 14th May 2020, Frontline Defenders published a statement saying that 28 imprisoned human rights defenders in Nicaragua have shown symptoms of COVID-19 and have not received medical attention. In particular, defenders María Esperanza and Celia Cerda Cruz have reportedly not received appropriate medical treatment for their health conditions. According to the IACHR, at least two political prisoners are said to have serious COVID-19 symptoms.

On 14th May 2020, Nicaragua’s government released 2,815 detainees, who are set to remain under house arrest. However, the Nicaraguan Centre for Human Rights (CENIDH) has stated that there were no political prisoners among those released.

The IACHR expressed concern at the arbitrary dismissals of medical and health staff for providing information on and criticising the government’s response to the COVID-19 pandemic. As reported by the organisation, six professionals have been dismissed for providing public interest information. IACHR stated that these unjust dismissals endanger or violate the rights of the dismissed and their families, and that they also harm public interests and the right to access information.

Oncologist Luz Talavera, one of the health professionals affected, told CNN that she believes the dismissal took place because of her critical stance toward the government and her participation in opposition marches since April 2018. Dr Talavera said she has faced harassment for her political views since 2018. The Nicaraguan Centre for Human Rights (CENIDH) also published a statement denouncing the arbitrary dismissal of Miguel Ángel Orozco, director of health research centre Centro de Investigaciones de Estudio de la Salud (CIES), and three other professionals on his team. Dr Orozco had reportedly criticised government response to the pandemic in interviews with local media.

At the beginning of May 2020, over 500 health professionals subscribed to a statement asking the Ortega government to take immediate action against COVID-19. They demand appropriate medical equipment, measures to prevent the virus spreading and transparent information on the situation in the country.