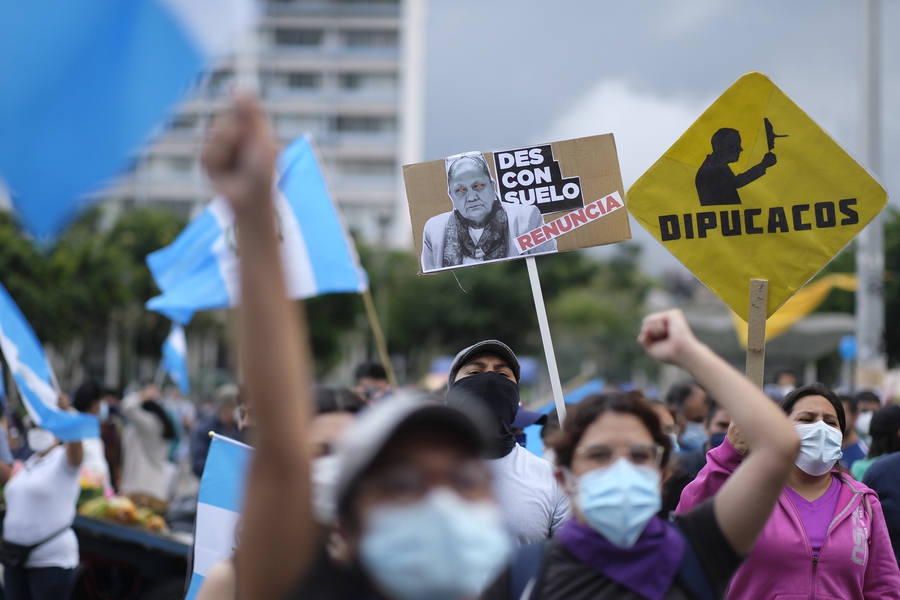 On 23rd July 2021, Guatemalan Attorney General Consuelo Porras removed the country’s lead anti-corruption prosecutor, Juan Francisco Sandoval, from his position as head of the Special Prosecutor’s Office against Impunity (FECI). Sandoval fled the country that night for fear of further reprisals. To justify the removal, the Attorney General’s Office cited “constant misdeeds and frequent abuses to institutionality”. However, the Office failed to follow the internal disciplinary process mandated by Guatemala’s law.

A spokesperson for the United Nations Secretary-General addressed the dismissal, expressing concern that after the International Commission against Impunity in Guatemala was closed, a growing number of former prominent prosecutors have needed to leave the country, seemingly because of their work on accountability and justice.

As previously reported on the CIVICUS Monitor, in May 2021 newly elected members of Guatemala’s Constitutional Court overturned an earlier ruling that had blocked the “Law on NGOs” (Decree 4-2020). The legislation had been challenged by civil society because it establishes strict and arbitrary control over the sector, restricting freedom of association. According to UN and Organization of American States (OAS) experts, the law also violates international human rights standards and could lead to criminalisation of human rights defenders and civil society in general. The new ruling effectively allowed the NGO Law’s adoption and implementation.

On 1st September 2021, the Asociación Guatemalteca de Jueces por la Integridad (Guatemalan Association of Judges for Integrity - AGJI) filed another unconstitutionality action against the NGO Law. The group argued that this legislation violates the national and international legal framework and is incompatible with the rights of freedom of association, peaceful assembly and expression. In particular, the group argues that the Registry of Legal Entities should be independent and should not be part of the Ministry of Interior.

On 11th June 2021, LGBTQI+ leader Andrea González was brutally assassinated a few metres from her home. Andrea was head of the trans rights group OTRANS Reinas de la Noche (Queens of the Night) and worked with several human rights movements including RedLacTrans and Cristosal. A few days before, Cecy Ixpata, another transgender activist and member of the RedLacTrans advocacy group died in hospital from lethal wounds sustained following an attack at a local market. Both defenders had sought help from the Attorney General’s Office over threats they had received.

“To protect LGBT people and prevent 2021 from becoming one of the deadliest years for gender and sexual minorities in Guatemala, authorities need to pursue accountability for these killings. Investigations by the Attorney General’s Office should prioritise establishing whether the victims were targeted on the basis of their sexual orientation or gender identity or their work defending LGBT rights.”

Attacks and criminalisation of HRDs

On 17th August 2021, a local court in Santa María Nebaj revoked the preventive detention of Maya K’iche leader Sebastiana Pablo Hernández de Lorenzo, replacing the measure with house arrest. The Indigenous leader has faced criminalisation for her work as a human rights defender and as Vice President of the Street Vendors Association in Joyabaj, Quiché. According to IM-Defensoras, this work has led to a clash of interests with mayor Florencio Carrascoza Gáme. She is one of 12 people accused by the mayor of inciting disturbances in the municipality during a protest. Sebastiana was in preventive detention for ten months, facing allegedly fabricated charges of aggravated robbery, aggravated arson, and sedition.

On 3rd September 2021, the Unidad de Protección a Defensoras y Defensores de Derechos Humanos-Guatemala (Unit for the Protection of Human Rights Defenders-Guatemala - UDEFEGUA) expressed concern over attacks against human rights defenders and civil society organisations. In their latest report, UDEFEGUA registered 551 attacks between January and June 2021; if this trend continues, 2021 could become the year with the highest level of attacks recorded by the organisation. The most frequent victims were members of the justice system, persons and organisations defending the right to justice, journalists and communicators and campesinos. The organisation also highlighted the attacks against women human rights defenders, which corresponded to 42% of the cases recorded. In addition, UDEFEGUA documented the murder of five human rights defenders as well as three other attempted killings.

On 9th June 2021, 21 land rights defenders were detained while attempting to peacefully demonstrate in the community of Chicoyogüito, Alta Verapaz. They were organising a march demanding the return of their ancestral lands, of which they were dispossessed by the Guatemalan Army in 1968, when it set up Military Zone 21 (now known as CREOMPAZ). As reported by Prensa Comunitaria, the protest never took place because agents of the National Civil Police (PNC) arrived and violently arrested 21 people on charges of “aggravated usurpation”. According to the International Federation of Human Rights, the police used excessive force to obstruct the demonstration.

On 24th July 2021, hundreds of people protested outside the presidential palace following the controversial dismissal of anti-corruption prosecutor Juan Francisco Sandoval. On 29th July 2021, hundreds joined a national strike convened by campesino and Indigenous organisations to demand the resignation of President Alejandro Giammattei and the Attorney General. Protests took place in Guatemala City, Totonicapán and in other cities. During the strike, Indigenous protesters blocked key junctures along the Pan-American Highway. Tomás Saloj, a former Indigenous mayor of Sololá, told The Intercept in La Cuchilla: “Who would not be angry? They took our last defender away.”

On 14th and 15th September 2021, ancestral authorities, Indigenous communities and organisations such as the Comité de Desarrollo Campesino (Committee of Rural Development - CODECA) demonstrated to express their rejection of celebrations of the bicentennial of Central America’s independence from the Spanish crown. They argued “there’s nothing to celebrate” because independence did not benefit the population and communities. Alida Vicente Arana, member of the Indigenous Mayoralty of Palín, said during a protest in Guatemala City: “In this false State, what has been perpetuated is exploitation, plunder, inequality, racism”. Official celebrations of the bicentennial were cancelled by the government because of the COVID-19 pandemic.

On 27th August 2021, journalists’ association Asociación de Periodistas de Guatemala (APG) issued a statement rejecting criminal charges against the directors of the newspaper La Hora. The organisation said that a complaint filed by Alejandra Carrillo, former deputy of Partido Patriota, seeks to censor the newspaper for carrying out investigations of her alleged involvement in corruption. Carrillo currently serves as director of a government institute which assists crime victims. Her complaint against La Hora’s directors is based on Guatemala’s law on femicides and other types of gender violence, claiming that the newspaper’s reports would constitute psychological gender-based violence.

The country’s Ombudsperson published an opinion asserting that Carrillo’s complaint “betrays the spirit of the law for the sole purpose of evading her accountability as a public official, transgressing citizens’ rights guaranteed in the Constitution”. APG also called the complaint “spurious” and said: "Regardless of gender or sexual orientation, every public official is exposed to public criticism and social scrutiny".

In a separate case, APG also condemned actions by the president of the National Congress of Guatemala against independent journalists. On 2nd September 2021, the president of Congress, Allan Rodríguez, banned journalist Enrique García with ElPeriodico from a conversation with the press on the 2022 draft budget. During a public event, Rodríguez interrupted García while the journalist addressed a question to the Minister of Finance. The parliamentarian also blamed the press for the 2020 protests against the budget and said that some media outlets did not report objectively. He then invited journalists to his office, where he would answer questions on the budget, but denied entry to ElPeriodico. APG said that since the beginning of his presidency, Rodríguez has hindered access to information.

In a positive development, on 3rd September 2021, a court in Nebaj dismissed charges against Maya K’iche journalist Anastasia Mejía Tiriquiz. Charges against vendor and Indigenous leader Petrona Siy were also dismissed. As previously reported on the CIVICUS Monitor, the journalist was detained in September 2020 after she broadcast live from protests against corruption in Joyabaj. The International Federation of Journalists celebrated Mejía Tiriquiz’s release and called on Guatemalan authorities to take the necessary measures to guarantee freedom of the press and compensate the journalist for the unfair criminal proceedings she faced. Charges remain against other defenders accused of taking part in violent protests in Joyabaj, including Sebastiana Pablo Hernández whose case was detailed in the 'Association' section of this update.