Mass protests against reduced budget for social policies in Guatemala 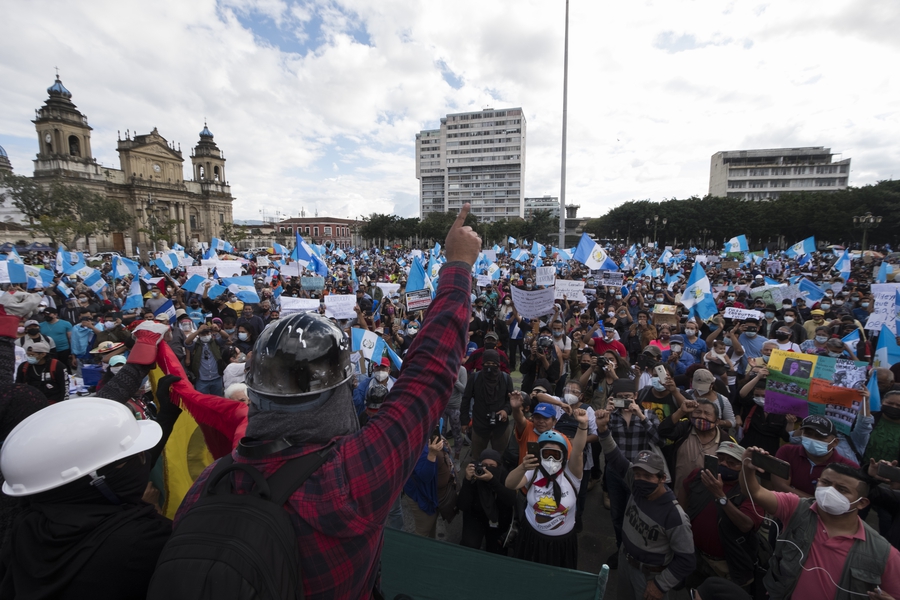 At the end of November and beginning of December 2020, thousands joined demonstrations against Guatemala’s government and legislature for approving a budget with cuts to education and health spending. The budget was negotiated without transparency or debate, and angered many by reducing funding for social policies, coronavirus patients and human rights agencies.

On 21st November 2020, an estimated 10,000 people joined mass protests in Guatemala City, during which groups of demonstrators broke windows and set fire to offices in the Congress building. The protests were repressed by police using excessive force, including indiscriminate use of tear gas and water cannon. Videos shared on social media showed police officers beating and dragging protesters. At least 17 people were injured during the protests, including two with eye injuries. According to Amnesty International, at least 43 people were also detained. Guatemala’s Public Prosecutor’s Office sought charges against nine young demonstrators but a judge dismissed the case and ordered the protesters’ release.

The Inter-American Commission on Human Rights (IACHR) condemned the excessive use of force by authorities and also requested an investigation on vandalism against the Congress. The United Nations also underscored the need for dialogue between government and civil society in the context of the protests. Guatemalan Ombudsperson Jordán Rodas called for the resignation of the Minister of Interior and the Director-General of Police in the wake of the demonstrations.

On 23rd November 2020, Guatemala’s Congress suspended the disputed budget’s approval. President Alejandro Giammatteilaunched a dialogue with members of government and civil society to review the budget. However, some of the invited organisations declined to participate in the meeting and said that the conditions offered by the government did not allow for a serious dialogue.

On 28th November 2020, anti-government protesters once again took to the streets. Demonstrators expressed a broader range of demands, from the resignation of key authorities to an end to corruption. While protests were mostly peaceful, there were also violent incidents in the evening with reports of hooded protesters burning a bus in front of the National Palace and attacking journalists covering the demonstrations. These attacks on journalists are detailed in the ‘Expression’ section of this update.

Protests continued over the following days. On 30th November 2020, Indigenous protesters from a number of communities in the Sololá department blocked roads in the region, demanding the resignation of authorities in the Giammattei administration and in Congress. On 5th December 2020, demonstrations took place in Guatemala City and several other departments calling for deeper reforms. A group of civil society organisations, including student movements, workers’ unions and Indigenous organisations, called for a process to draft a new constitution for Guatemala.

On 6th December 2020, Maya leader Abelardo Quej Ixim was shot and killed during his shift on community watch. He was a leader of the Nueva Gloria community, Purulhá municipality in Baja Verapaz, which four months earlier experienced the disappearance of another of its leaders, Carlos Enrique Coy. According to the Ombusperson’s Office, people of Nueva Gloria have faced attacks from illegal armed groups and authorities have failed to adequately investigate Coy’s disappearance.

On 20th November 2020, civil society organisation Unidad de Protección a Defensoras y Defensores de Derechos Humanos (UDEFEGUA) published a report on the situation of human rights defenders in Guatemala between January and September 2020. UDEFEGUA registered 844 assaults on human rights defenders and civil society in this period, noting that within nine months of 2020 attacks had already exceeded the 820 cases registered in 2014, the most violent year since UDEFEGUA began registering these incidents.

According to the organisation’s analysis, during the COVID-19 pandemic Guatemalan authorities created an environment hostile to freedoms of expression and association. The health emergency was exploited, said UDEFEGUA, to limit and obstruct the work of human rights defenders –subjecting them to harassment, threats and lethal attacks. UDEFEGUA reported 14 murders and 22 assassination attempts in the first nine months of 2020, 303 cases of harassment and 287 cases of criminalisation.

On 10th November 2020, journalist Mario Arturo Ortega Garcia was shot near his home in Escuintla. He was transferred to a local hospital, where he died four days later. Ortega was the founder of San José Total, a TV station and digital news outlet where he also worked as a reporter covering local political and social issues. As reported by the Committee to Protect Journalists (CPJ), relatives of the reporter said he had previously received threats for his work. The Association of Guatemalan Journalists and UNESCO condemned the killing and called for an investigation.

Journalists covering anti-government protests on 28th November 2020 reported facing verbal and physical attacks. At least seven journalists with media outlets Guatevisión, Prensa Libre, Nuestro Diario, Ruda and Federación Guatemalteca de Escuelas Radiofónicas (FGER) faced attacks after violence erupted as a group of hooded demonstrators set fire to a bus. In one case reported by IM-Defensoras, Jovanna García, a journalist with Revista Ruda, was beaten with an iron pole and called an “infiltrated feminist” by a man participating in the protest.

On 1st December 2020, journalists with AztecaNoticias were attacked while covering a fire in Puerta Parada, Santa Catarina Pinula. In a video of the incident, shared by the outlet, a man is seen attacking camera operator Josué Santos and pushing him to the ground.

Press association Asociación de Periodistas de Guatemala (Association of Guatemalan Journalists – APG) launched a report on freedom of expression in 2020. According to the organisation, there were 124 cases of violations against press freedom in Guatemala in 2020. This exceeds the 84 incidents documented in 2019 and the 115 cases registered in 2015, the most violent year for media since APG began their reports. The organisation said attacks during the first year of Alejandro Giammattei’s government far exceeded the number of cases registered in the first year of the two preceding administrations. Most of the incidents documented in 2020 were related to coverage of the COVID-19 pandemic, said APG. Smear campaigns, harassment online and offline and judicial harassment were highlighted as key issues for Guatemala’s press.