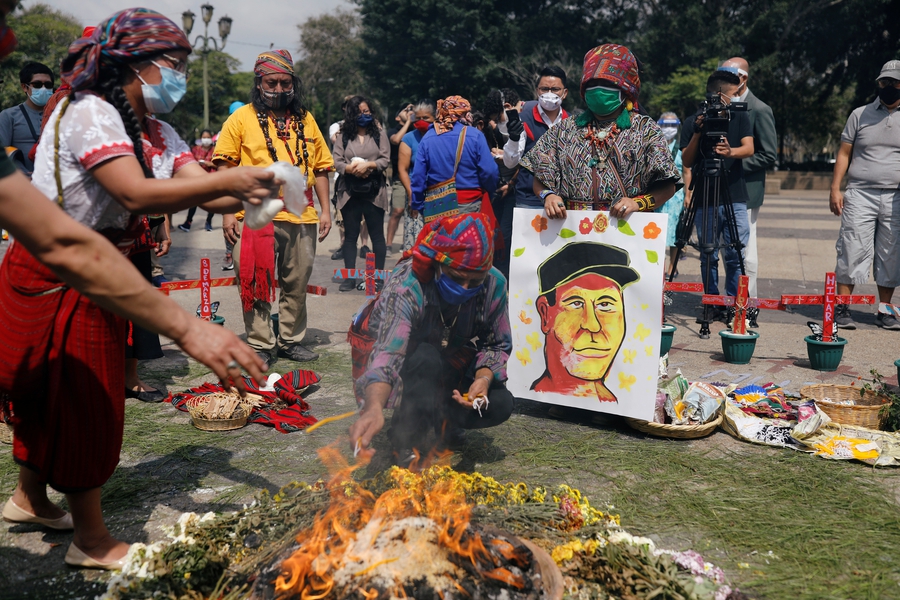 On 11th September 2020, the Inter-American Commission on Human Rights (IACHR) condemned the murders of and attacks against Indigenous and land rights defenders and their allies. According to the information collected by the regional organisation, between June and August 2020 there were at least eight killings of defenders fighting for land rights.

Summarised below are three of the killings reported by IACHR, which took place in August 2020.

On 10th August 2020, French activist Benoît Maria, a representative of Agrónomos y Veterinarios Sin Fronteras (Agronomists and Veterinarians Without Borders - AVSF) working with Ixil and Q’eqchi Indigenous communities in the defence of their territory, was killed in Alta Verapaz.

On 11th August 2020, Misael López Catalán, member of the Comité de Desarrollo Campesino (CODECA), was shot and killed on the farm where he worked in El Cafetalito, San Pedro Pinula, Jalapa.

In a related development, on 10th October 2020, the civil society organisation Comité de Unidad Campesina denounced that armed groups have continued to intimidate Q'eqchi’s indigenous and rural families living on the Cubilgüitz Farm in Cobán, Alta Verapaz. In August 2020, the same community had been threatened and attacked by armed invaders seeking to extrajudicially evict them. According to news reports, several people were forced to flee, 17 houses were damaged and six were burned down. The violent attack affected 40 families living on the land.

On 17th September 2020, civil society organisations sent a letter to President Alejandro Giammattei to recall the country’s pending obligations under a decision by the Inter-American Court of Human Rights ordering the adoption of a protection policy for human rights defenders. The initiative was pushed forward by a group of international and regional organisations: Amnesty International, Front Line Defenders, Iniciativa Mesoamericana de Mujeres Defensoras de Derechos Humanos (IM-Defensoras), Just Associates (Asociadas por lo Justo - JASS) and Centre for Justice and International Law (CEJIL). In their letter, the civil society organisations advocated for a comprehensive and intersectional policy and for adequate resources to strengthen the inter-institutional response to the urgent risks faced by defenders.

Human rights organisation UDEFEGUA has reported that 93 human rights defenders were killed in Guatemala between 2017 and 2019; 15 of these in 2019. In most of the cases, victims were not identified by the State as defenders. Only 10% of the killings were followed by successful investigations leading to conviction of perpetrators. According to the same organisation, there were 157 new attacks against defenders between January and April 2020.

On 22nd September 2020, officers of criminal investigation department División Especializada en Investigación Criminal (DEIC) arrested Indigenous journalist and defender Anastasia Mejía Tiriquiz, the director of Xol Abaj Radio and Xol Abaj TV. She was charged with sedition, aggravated assault, arson and robbery after broadcasting live from protests against alleged corruption by the local authorities. During the demonstration, municipal buildings were damaged. The Maya K’iche journalist has also been subjected to a smear campaign on social networks, including accusations that she is running a “pirate radio station”, among other messages filled with hate speech.

According to civil society network IM-Defensoras, ten other people were charged through the same arrest warrant, which also ordered a search of the Xol Abaj radio station. Local leader Petrona Siy Castro was among those charged and detained. The case’s hearing was postponed and Anastasia was denied bail, leaving her under pre-trial detention for more than a month – in a process fraught with irregularities as reported by Frontline Defenders. In a court hearing on 28th October 2020, a judge decided that both Anastasia and Petrona were to pay fines and stay under house arrest while the investigation and court case continue.

In a separate development on 22nd September 2020, three Indigenous social communicators with Festivales Solidarios were threatened and attacked while reporting on the detention of illegal loggers in Alto de Totonicapán. An armed group attacked the authorities to free the loggers and also attacked the reporters when they tried to film. As a result, communicator Andrea Isabel Ixchíu Hernández had several broken ribs.

On 29th September 2020, congressmen Julio Lainfiesta and Aníbal Samayoa said they had filed a criminal complaint against youth organisation Incidejoven and other social media profiles that had shared information about safe and legal abortion rights on the International Day for the Decriminalisation of Abortion. The two deputies, who are members of parliamentary coalition Front for Life and Family and of an anti-rights association, claimed that the social media posts constituted “incitement of crime”.

Human rights advocates called this an attempt to criminalise sharing information on sexual and reproductive health. Feminist network IM-Defensoras repudiated these efforts, saying that such organisations and individuals inform and raise social awareness of the need to guarantee free and safe access to a right that, as the organisation pointed out, has been recognised by the highest human rights entities, such as the IACHR and the United Nations, and in human rights accords signed by Guatemala.

In a similar development, journalists Jovanna García and Mercedes Valdes, correspondents of the digital outlets Ruda and Prensa Comunitaria, said they were subjected to attacks as a result of their work reporting activities around the International Day for the Decriminalisation of Abortion, 28th September. These attacks included verbal assaults, intimidation, harassment and threats, both in person and through social media.

On 10th October 2020, hundreds of women peacefully demonstrated against gender violence in several Guatemalan cities, equipped with musical instruments, handkerchiefs, posters and masks. The protests were organised around the International Day of the Girl Child and inflated by the news of two young women, 22-year-old teacher Laura Hernández Guevara and 20-year-old student Litzy Cordón Guardado, who were killed within a week in the Zacapa department. “For all the girls who were burned, for all the women shouting in the plaza, for all the mothers searching without peace, we sing without fear, we call for justice,” the protesters sang in Guatemala City.

On 15th August 2020, about 200 people joined an anti-government protest in front of the National Culture Palace to condemn the country’s pandemic response and demand transparent use of resources during COVID-19.