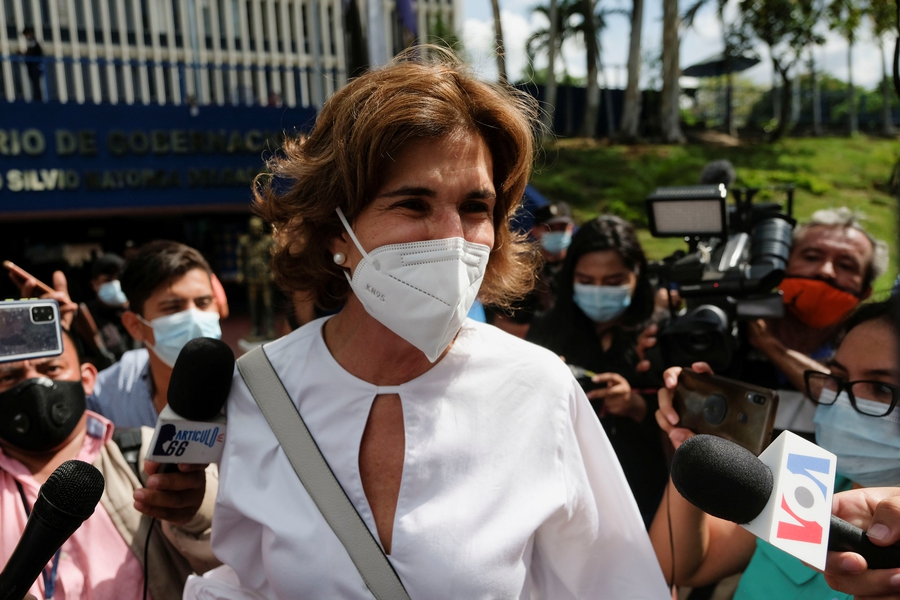 Cristiana Chamorro talks to the media when leaving the Attorney General's office, 20 May 2021. REUTERS/Carlos Herrera

On 20th May 2021, Nicaraguan police notified the former director of the Violeta Barrios de Chamorro Foundation, Cristiana Chamorro, of an investigation against her and other former managers of the organisation. Ministry of Interior authorities claimed the foundation’s financial reports filed between 2015 and 2019 had alleged “inconsistencies” which would indicate money laundering. Chamorro and other members of its staff were also subpoenaed by police in relation to the investigation. The foundation suspended their operations in February 2021 after refusing to register under the country’s new Foreign Agents Law.

Also on 20th May, police in Managua raided the provisional offices of the news outlet Confidencial, run by Carlos Fernando Chamorro, Cristiana Chamorro’s brother. A cameraman who was at the studio, Leonel Gutiérrez, was detained for about seven hours. Other journalists covering the police operation were also threatened with detention. The news media’s former offices were first raided and seized in December 2018 amid a crackdown on civil society and independent media.

Cristiana Chamorro, who is the daughter of former president Violeta Chamorro, said these actions by the government and the accusations against her are politically motivated attacks against democracy. As reported by the Associated Press, she is a potential presidential challenger in the November 2021 elections. Civil society organisations, the UN Office of the High Commissioner for Human Rights (OHCHR) and the Inter-American Commission on Human Rights (IACHR) expressed concern about the government's continued harassment of journalists, civil society and members of the political opposition.

In another development, on 6th May 2021 the Inter-American Court of Human Rights held a public hearing on the implementation of provisional measures granted to members of civil society organisations Centro Nicaragüense de Derechos Humanos (Nicaraguan Centre for Human Rights – CENIDH) and Comisión Permanente de Derechos Humanos (Permanent Human Rights Commission - CPDH). However, instead of providing accountability on the actions taken to guarantee the rights of human rights defenders, Nicaragua’s diplomatic representative further stigmatised them. The representative accused defenders of engaging in criminal activities to destabilise the country and of misrepresenting their situation to the Court.

In response, civil society organisations IM-Defensoras, Unidad de Registro (Recording Unit - UDR) and Unidad de Defensa Jurídica (Legal Defence Unit - UDJ) published a statement reporting that they had registered 916 cases of harassment against human rights defenders, former political prisoners and their families between November 2020 and April 2021. The organisations said the Nicaraguan State had given a distorted version of reality by denying before the Inter-American Court of Human Rights the veracity and systematic nature of the harassment and other aggressions perpetrated by police and pro-government groups.

Separately, Presas y Presos Nicaragua, a human rights group working on cases of political prisoners, published a report on incidents registered between 5th March and 7th May 2021. According to their monitoring, there were 122 political prisoners in the country at the end of the period – 112 of whom were arrested during or after April 2018. The organisation said cases of short-term detention increased in April 2021 in the context of the third anniversary of the political crisis. In addition, political prisoners have continued to report facing intimidation in the penitentiary system, as well as obstruction when relatives attempt to visit them.

On 3rd May 2021, in commemoration of World Press Freedom Day, several civil society organisations spoke up about the deterioration of civic space and freedom of expression in Nicaragua. In a statement, AMARC, CPJ, IFEX, the Institute on Race and Equality and Voces del Sur condemned the persistent hostile environment toward journalism in the country. The organisations received complaints from affected journalists that they have been subjected to excessive scrutiny, insults and assaults while carrying out their work. They have also reported cases of sexual abuse.

The organisations called on government to repeal restrictive cyber-crimes and foreign agents laws, which run contrary to international freedom of expression standards, and to guarantee journalists’ security and refrain from using state apparatus and the armed forces to harass and censor critical voices.

Similarly, PEN International published a statement remembering journalists who have been killed or targeted in the pursuit of a story. The organisation highlighted the case of Nicaraguan journalist Kalúa Salazar from Radio La Costeñisima, who has faced criminalisation and police harassment for reporting on government corruption.