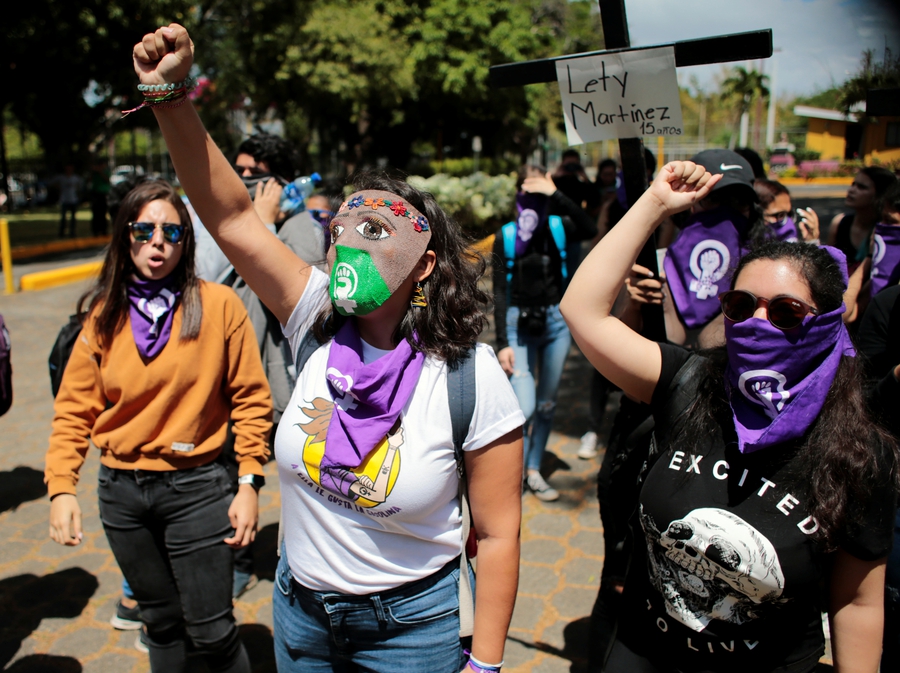 About 150 women organised a clandestine demonstration at the campus of the Universidad Centroamericana (Central American University) to commemorate International Women’s Day on 8th March 2021. According to news reports, the participants mobilised in secret to bypass the government’s official ban on protests, in effect since 2018. Even then, at least four activists reported that police patrols had been parked in front of their houses to prevent them from protesting on the day. During the demonstration, young women led an artistic intervention in honour of femicide victims, called for the release of four women political prisoners and sang Nicaraguan versions of resistance songs “Canción sin miedo” and “Mi libertad”.

Also in the context of International Women’s Day on 8th March 2021, feminist network IM-Defensoras registered 16 incidents of repression against 20 women human rights defenders in Nicaragua, including some defenders who have been granted precautionary measures by the Inter-American Commission on Human Rights (IACHR). IM-Defensoras also registered actions against two feminist collectives and a group of families of women political prisoners. These incidents consisted of acts of surveillance, harassment, threats and restrictions on the defenders’ rights to freedom of expression, association and movement. The main perpetrators of these attacks were identified as police agents and armed individuals dressed in civilian clothing.

In a separate development, on 15th March 2021 a European Parliament delegation held a session on Nicaragua’s situation regarding human rights defenders and members of the country’s political opposition. Wendy Flores, spokesperson for Colectivo de Derechos Humanos Nicaragua Nunca Más (Human Rights Collective Nicaragua Never Again), reported that repression has increased in the context of elections and that there are currently 125 political prisoners in Nicaragua. The collective has recorded at least 77 cases of torture or ill-treatment of political detainees.

Instrumentalisation of Law on Foreign Agents

Civil society organisations have denounced bureaucratic obstruction when attempting to fulfill requirements under the Law on Foreign Agents. The Comisión Permanente de Derechos Humanos (Permanent Human Rights Commission - CPDH) said the Ministry of Government made several requests for additional information when they attempted to register. Some of these requirements, CPDH said, were not outlined in the legal framework. Regional civil society network Redlad also received information that the Ministry has created onerous obstacles for organisations and archived some applications. In some cases, authorities have allegedly reviewed the social media profiles of organisation directors, using their political views and affiliations to make decisions regarding registration.

As previously reported on the Monitor, the law gives government ample discretionary powers to control and muzzle civil society, including the power to freeze assets and cancel the legal personality of organisations not meeting requirements.

Press organisation Periodistas y Comunicadores Independientes de Nicaragua (Independent Journalists and Communicators of Nicaragua) reported that radio station La Costeñisima and journalist Kalúa Salazar have been under attack for their reporting. Salazar, who is the station’s editor-in-chief, was charged with criminal slander in response to a radio report on alleged corruption in El Rama. She was found guilty in September 2020 and has appealed the conviction. After her appeal hearing on 9th March 2021, the journalist reported facing police harassment. On 22nd March 2021, for instance, her house was reportedly besieged by at least ten police vehicles.

In a separate case, journalist Wilih Narváez and his family have faced harassment for his journalistic work. As reported by the Committee to Protect Journalists, on 24th February 2021 an unidentified man went to Narváez’s house in Managua and yelled at the journalist’s mother, making threatening gestures and saying he knew that it was the home of a journalist from Canal 10. On 28th February 2021, the same man returned to Narváez’s house, told the journalist he would kill him and threw rocks that landed on the roof.

Precautionary measures by the IACHR

On 23rd February 2021, the IACHR granted precautionary measures to 17-year-old Kevin Adrián Monzón Mora and his family, saying they had faced threats, harassment and attacks for the young man’s publications on video platform TikTok. According to the IACHR, police agents also sought to intimidate and offend Monzón Mora while he was detained in December 2020, making references to his sexual orientation. The young activist has used his TikTok account to publish satirical videos criticising Nicaragua’s authorities.