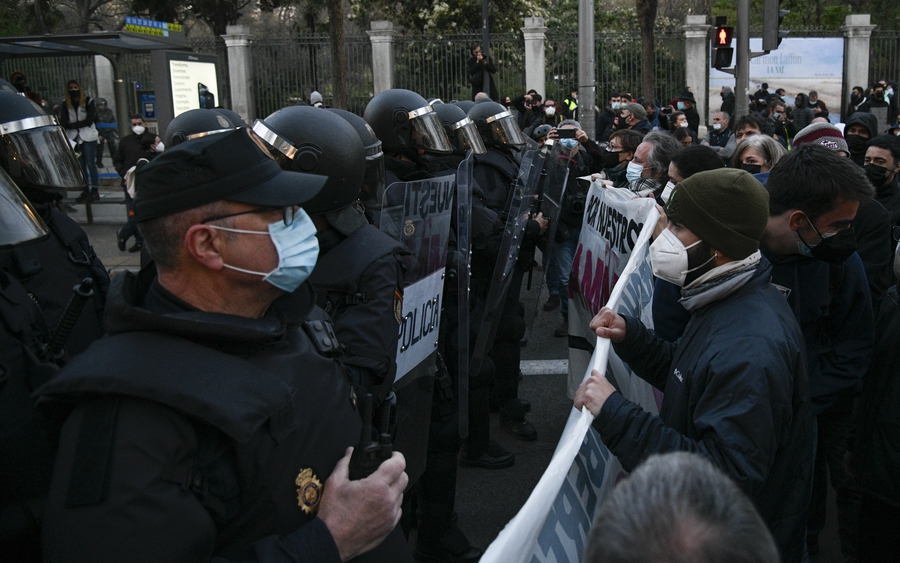 Protests erupted over the arrest of the Spanish rapper Pablo Hasél (Photo by Joan Amengual / VIEWpress).

Despite the extended state of alarm, the coronavirus infection rate in Spain continues to rise at an accelerating rate. On 12th March 2021, the country scored second on the list of European countries with the highest number of COVID-19 cases. The Health Minister Carolina Darias has described the situation in the country as the beginning of the fourth wave of the pandemic, admitting that the efforts focusing on 'saving the Christmas' during the third wave in December were a mistake that caused a sharp increase in cases.

As reported previously, in December 2020 the Spanish Supreme Court revoked the Catalan government's decision to grant several of Catalonia’s jailed separatist leaders a “Grade 3” prison regime rating, which allows convicts to leave prison for several hours per day and spend weekends at home. Despite the decision of the Supreme Court, in January 2021 the Catalonian government again agreed to award the leaders Grade 3 status. However, after an appeal by the Prosecutor's Office, the Superior Court of Justice of Catalonia (TSJC) confirmed the position of the Supreme Court in December 2020, describing the decision to transfer the prisoners to the third grade as "hasty" and "premature".

As a result, on 9th March 2021, the nine leaders of the 2017 breakaway attempt in Catalonia have returned to jail to serve their sentences under the standard “Grade 2” regime.

The leader of the 2017 secession attempt, former Catalan premier Carles Puigdemont, is still in Belgium. In early March 2021, the European Parliament voted to lift Puigdemont’s immunity (that he has had as an MEP), and without parliamentary immunity he may face extradition to Spain in the near future.

“The general prohibition of all concentrations and demonstrations on the occasion of 8M in Madrid is a disproportionate limitation to the right to peaceful assembly established in international law. Each petition must be evaluated individually. The authorities must carry out a case-by-case evaluation, which considers what measures can be adopted to prevent contagion, without the need to prohibit the demonstration in its entirety." (Translation from Spanish)”

Nevertheless, as El Pais reports, 50 women went on to demonstrate in Madrid, while others applauded from their balconies and windows and rode down the central street on bicycles. There is no information on detentions, police brutality against protesters or fines for breaching the COVID-19 regulations. In Barcelona, thousands of women protested, holding signs such as “respect my existence or expect resistance”. However, the protest was disrupted when a man pepper sprayed five women who were taking part in the protest. The man was detained by police.

On 26th March 2021, Extinction Rebellion Spain formed a human chain outside the offices of the Ministries of Health and Social Rights and Agenda 2030 to demand the creation of a Citizen Assembly for the Climate.

“We want a citizen assembly in which we talk about the important things that are affecting our lives right now, and these have a lot to do with the environmental crisis we are experiencing," said Javier de la Casa, from Extinction Rebellion during the blockade.

Police began to forcefully remove protesters from the human chain after an hour and a half. Since they had formed a human chain with tubes, police physically lifted protesters to remove them.

On 27th February 2021, protests erupted across Spain over the recent arrest of the Spanish rapper known as Pablo Hasél (Pablo Rivadulla). The musician was detained and given a nine-month prison sentence for glorifying the terrorist groups ETA and GRAPO in 2018 and insulting the Crown and state institutions on Twitter and in a song posted on YouTube. (Hasél was originally sentenced to two years in prison, later reduced to nine months.)

"The jailing of Pablo Hasél for his lyrics and tweets is yet another example of the Spanish authorities’ silencing of artistic voices. Democracies don't jail poets, even if the words they express are disturbing or uncomfortable. It is astonishing that Spain has just done that. Peaceful expression, even when it seems insulting or disrespectful, must never be criminalised. The Spanish authorities must release Pablo Hasél at once", said Salil Tripathi, Chair of PEN International’s Writers in Prison Committee.

Protests erupted for a week every evening after the rapper's arrest. Multiple clashes broke out, stores and buildings were damaged and more than 100 people arrested. The Andalusian Human Rights Association (APDHA) reports that there was "a disproportionate use of force, unjustified use of extendable police batons, the use of the endowment defence known as a truncheon, and the dragging of a person on the ground" during some of the arrests in Linares.

One of the demonstrators, William Aitken, remained in jail more than a month after his arrest and was released in March 2021 due to "insufficient evidence to justify keeping him behind bars before the trial."

Protests against the arrest of rapper Pablo Hasel have gripped Spain, with dozens arrested during clashes with police https://t.co/q1lYv2Igwu pic.twitter.com/8NNBmIy012

It has also been reported that several journalists covering the protest in the city of Valencia were hit with police batons, despite the fact that they could easily have been identified as members of the press. In addition, on 21st February 2021, a photojournalist was physically assaulted by a protester as he was covering a demonstration. The Union of Valencian Journalists (UPV) condemned the “disproportionate police action” against the journalists.

“In this case, at least two colleagues from 'À Punt' and 'València Extra', to whom we give our full support, have publicly denounced having suffered the police charges despite identifying themselves as journalists. We consider that they are inadmissible facts that must be investigated by the Government Delegation in the Valencian Community.” (translated from Spanish).

Following the events around the arrest of Pablo Hasél, on 11th March 2021, the Council of Europe Commissioner for Human Rights, Dunja Mijatović, wrote a letter to the Spanish Minister of Justice, Juan Carlos Campo, inviting Spanish authorities to strengthen existing safeguards to the right to freedom of expression and introduce amendments to the Criminal Code. Mijatović noted that in the last few years a growing number of criminal convictions have been handed down to artists for controversial lyrics and other performances, and to social media activists for statements considered offensive under various provisions of the Penal Code. In her letter she asked the Minister “for recent information indicating that your government intends to amend some aspects of the Criminal Code, in particular the offence of glorification of terrorism, to ensure a better protection of freedom of expression.”

Spanish authorities should amend the Criminal Code to strengthen existing safeguards of the right to #FreedomofExpression
Read my exchange of letters with the Minister of Justice of #Spain @justiciagob @Jccampm https://t.co/UYA5hhOAm0

In his reply, Minister Campo informed Commissioner Mijatović that the Spanish government is already working on the issue:

"Although the proposal that we want to present is still being subject to study and does not have a finished wording, we have announced the main aspects that we would like to review. In general terms, our purpose is, on the one hand, to define more clearly what is the conduct sanctioned in these crimes and, on the other, adjust the penalties to the seriousness of the conduct. We intend thereby to guarantee greater legal certainty and at the same time avoid the reviled disincentive effect that may occur on the exercise of a right as important as freedom of expression."

In a related development, in March 2021, the Venice Commission of the Council of Europe adopted an opinion on the so-called "Gag Law" (Citizen's Security Law), emphasising that it has a "repressive potential".

According to the information gathered by Amnesty International Spain, during the first state of alarm from 14th March to 23rd May 2020, more than one million complaints were filed against the misuse of Article 36.6 of the "Gag Law" ("disobedience or resistance to the authority or its agents in the exercise of their functions").