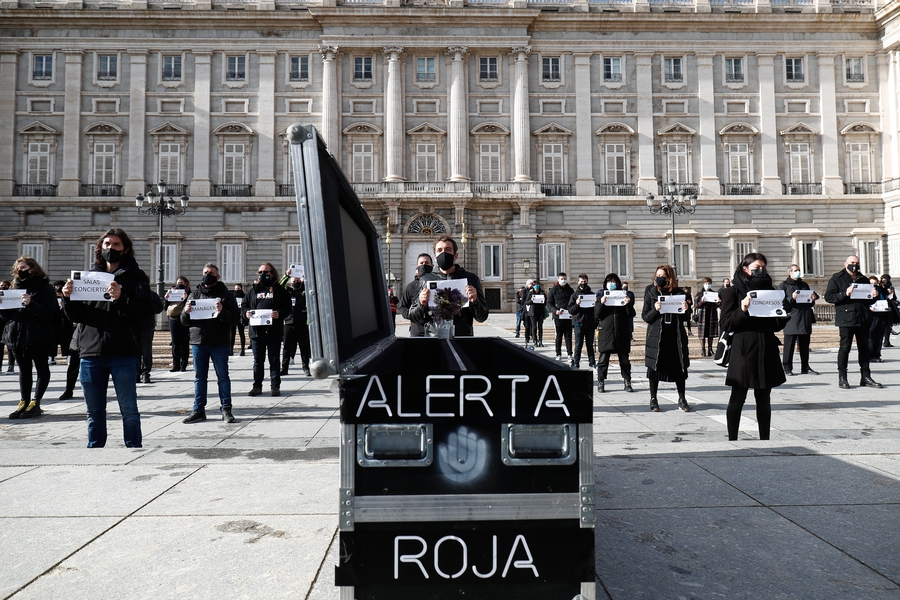 As reported previously, on 29th October 2020, Spain’s government extended the state of alarm until May 2021 in response to the COVID-19 pandemic. The situation in the country remains critical, with the daily number of newly reported cases rising since mid-December 2020.

On 11th December 2020, protests were organised by the Red Alert movement, which represents artists and performers in 19 different cities, against the dire impact of COVID-19 on the sector. To convey the message of “agony suffered” by the sector, a creative form of socially distanced protests was staged to create a funeral march, with some people carrying coffins.

On 12th January 2021, 4,000 people protested in La Palma - the largest city of the Balearic Islands - against the COVID-19 restrictions. The majority of the demonstrators were workers from the hospitality and food services industry, who have been strongly impacted by the measures adopted to curb the pandemic. There were no reports of detentions or police brutality against the protesters during the demonstration. However, the assembly's organisers will be fined for breaching the COVID-19 regulations, since the demonstration was prohibited by the government of the Balearic Islands due to public health concerns.

In July 2020, the Catalan government granted the “Grade 3” prison regime to several of Catalonia’s jailed pro-independence leaders. The “Grade 3” is seen as a less strict regime which, among other concessions, allows convicts to leave prison for several hours per day and spend weekends at home. However, this decision wasrevoked by the Spanish Supreme Court in December 2020, which labelled the move to a flexible regime as “premature”.

Amnesty International Spain condemned the Court’s decision to reverse the flexible regime of Jordi Sànchez and Jordi Cuixart - two pro-independence leaders sentenced for sedition in November 2019. The human rights organisation’s director, Esteban Beltrán, stressed that the detention of Sànchez and Cuixart is “an undue restriction on their rights to freedom of peaceful assembly and expression”. The organisations also advocated for reforms of the Spanish Penal Code:

“AI has also asked Congress to move forward without delay with the reform of the Penal Code to ensure that the definition of the criminal offence of sedition does not unduly criminalise the exercise of freedom of expression and peaceful assembly or impose disproportionate penalties on acts of peaceful civil disobedience” (translated from Spanish).

On 14th January 2021, the Catalan prisons of Lledoners, Puig de les Basses and Wad-Ras, put forward a proposal to regrant the “Grade 3” prison regime to the jailed pro-independence leaders. However, for this proposal to be effective the Catalan Government’s Justice Department must ratify it within a period of two months.

On 15th December 2020, the Spanish Constitutional Court ruled that “insults to the Spanish flag are not protected by freedom of expression” and therefore are considered a crime. The Court’s ruling was in relation to Pablo Fragoso’s appeal, a union representative who in 2014 was fined for allegedly using insulting language while burning the Spanish flag at a demonstration. In response to the Constitutional Court’s decision, his lawyer Gonzalo Boye tweeted “We shall see what the European Court of Human Rights says”.

Despite the outcome, it is worth noting that the decision on Fragoso’s case was not unanimous, with the Court’s ruling approved by six votes in favour and five against. Patricia Goicoechea, Deputy Director of Rights International Spain, told the CIVICUS Monitor:

“It is worrying that six members of the Spanish Constitutional Court consider it to be legitimate to deliberately disregard the jurisprudence of the European Court of Human Rights, holding a restrictive interpretation of the scope of freedom of expression”.

In a related development, on 17th December 2020, the Spanish Constitutional Court sentenced to six months in prison a man who in 2017 disrupted a religious ceremony and shouted pro-abortion slogans. Once again, the Court ruled that the aforementioned action was not protected by freedom of expression. However, the ruling was not unanimous. Cándido Conde-Pumpido -- one of the Constitutional Tribunal judges who voted against the Court’s ruling reasoned in his dissenting opinion that the action in question did not “incite religious hatred”, nor did it use “any offensive or hurtful expression”, and the aim was to protest against the Church’s stance on abortion.

In a separate development, in early January 2021, a Spanish Court condemned CTXT- a Spanish online media outlet - for breaching the “right to honour” of a famous actor due to a news article about his creation of a company to manage the Film Academy’s annual award gala published in 2016. According to Judge Ana Mercedes Merino Melara, even though the aforesaid news article contained accurate information and reliable sources, it was written in an “insidious manner” which has damaged the actor’s honour. Concerns over preventive censorship and severe restrictions on freedom of information were raised by Joaquín Urías, a Constitutional Law professor, who noted:

“The publication of duly verified and relevant information for society is an action that enjoys constitutional protection”.

Professor Urías considered the Court’s ruling particularly troublesome because it jeopardises the right to freedom of information since CTXT is now forbidden from publishing any further information relating to the news that resulted in the legal lawsuit.