Despite UN review, Maldives authorities crack down on protests and target the media 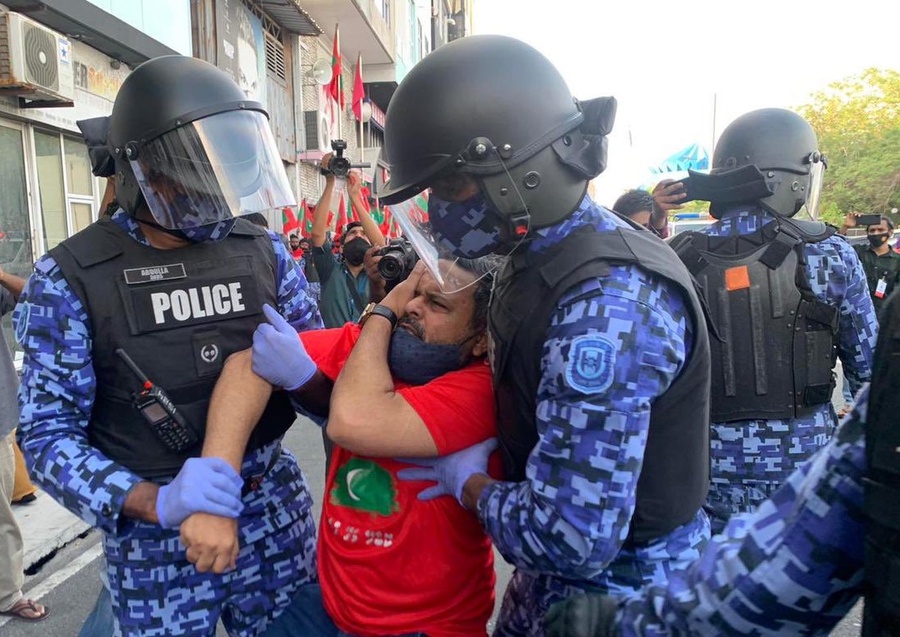 On 17th March 2021, the outcome of the review of Maldives’ human rights record was adopted by the UN Human Rights Council.

Prior to the review, the Transitional Justice Act was passed and approved by the President, which aims to investigate acts of corruption and systematic violation of human rights that occurred between 1953 and 17th November 2018. Further, in January 2021, the President created the Office of the Ombudsperson and appointed the Chief Ombudsperson in accordance with the Transitional Justice Act.

While many of the many of the recommendations received by states at the Human Rights Council relating to civic space and enjoyment of fundamental freedoms were accepted, CIVICUS noted that more needs to be done to protect human rights defenders from attacks and smear campaigns and to bring perpetrators to justice. Islamist groups and criminal gangs continue to threaten and attack human rights defenders and civil society organisations online with impunity. The police have often failed to investigate such threats or have done so only cursorily.

In the last few months, we have seen a crackdown on opposition protests by the authorities and the failure to amend the regressive Freedom of Peaceful Assembly Act to bring it in line with international human rights law and standards. Further, media workers have been targeted. There has also been a failure to review the arbitrary dissolution of human rights organisation the Maldivian Democracy Network (MDN) and the seizure of their funds as recommended during the UPR review.

Since early January 2021 there has been an ongoing crackdown on protests by opposition political parties in the Maldives. The government has often cited the COVID-19 pandemic and violations of the Health Protections Agency (HPA) guidelines and the Freedom of Peaceful Assembly Act for arrest and dispersal of protests.

On 27th January 2021, PNC’s President Abdulla and Vice President Shujau were re-arrested from the opposition staged demonstration in front of the Health Ministry. The demonstrators were demanding that the authorities disclose more information regarding the vaccines donated by the Indian government. On 30th January 2021, the Maldives Police Service arrested 11 individuals from a protest organised in the capital Malé by the opposition coalition of the PPM and the PNC. The demontration in Malé was part of a string of protests held across the archipelago demanding the release of jailed former president Yameen and calling for a free and fair election.

On 26th February 2021, Maldives Police Service took a number of opposition leaders into custody in an effort to disperse the protest rally by the opposition.

On 5th March 2021, the police detained 17 people at a protest rally led by the opposition, Progressive Coalition. On 12th March 2021, a total of 23 people were taken into custody of the Maldives Police Service from an opposition protest rally. Those taken into custody today including the President of and acting Head of the Progressive Coalition, Abdul Raheem Abdulla (Adhurey). On 16th March 2021, seven people were arrested from opposition-led protests in Male' City. Opposition spokesperson Heena Waleed said that those arrested included former parliamentarians, including former MP Mohamed Ismail and Mohamed Shahid.

On 25th November 2020, the Maldives Parliament rejected amendments to the Freedom of Peaceful Assembly Act, which would have allowed protests in the capital city of Malé without prior permission. Previously, in October 2020, the Parliamentary Committee on National Security and Foreign Relations voted to repeal the contentious amendments made in 2016 during former President Yameen's tenure.

While in opposition, President Solih’s Maldivian Democratic Party had raised concerns about the amendment to the Freedom of Peaceful Assembly Act in 2016. The amendments required that any gatherings held in the capital Malé must obtain prior permission from the police, unless the gathering is held at a location pre-approved by the Ministry of Home Affairs, and limited to one closed-off location in the city. According to international watchdog groups, these restrictions have rendered the right to the freedom of peaceful assembly meaningless under the law

Other amendments proposed include barring protests within 300 feet of the Vice President’s residence and that resort employees could also protest in silence in accommodation areas of the resort. A total of 25 parliamentarians voted to reject these amendments, while 56 MPs voted to send it back to the Committee.

Attacks on media workers around protest

🇲🇻 #Maldives: Channel-13 reporter Mohamed Shaheem was mistreated by the police and violently tackled to the ground while he was covering an opposition-led protest last Friday. @RSF_inter calls on local authorities to not let go unpunished this blatant case of #PoliceBrutality. pic.twitter.com/5lvWKdL54B

Media workers have come under attack for covering the protests. In February 2021, the Maldives Police attacked a Channel 13 camera operator and harassed the channel’s chief operating officer and station deputy in two separate incidents during opposition-led protests in Malé.

According to the International Federation of Journalists (IFJ) Channel 13 camera operator Mohamed Shaheem was tackled to the ground and injured by police as he attempted to cover the protests in the Alimas Carnival area of Malé on 20th February 2021. Channel 13 was the only network with live coverage of the protests. Following the incident, Shaheem was admitted to a local hospital for treatment.

Organised by both the Progressive Party of Maldives (PPM) and the People's National Congress (PNC), the protest called on the government to nullify the state’s phase two distribution of its flatsunder the "Hiyaa" public housing scheme project of Hulhumale in North Malé, saying the distribution was ‘unjust’. The public housing project included the development of 7,000 flats. The protesters also demanded authorities release former president Abdulla Yameen, who is currently serving a jail term for money laundering.

On the same day, police used force to remove Channel 13’s chief operating officer, Mohamed Samah, and the station’s deputy-in-charge, Hussain Ihsan, from a restaurant near the protest, despite both of them wearing media passes. Video footage of the incident shows police barging into the restaurant and forcefully manhandling the journalists out of the restaurant.

The Maldives Journalist Association said: “We believe that all journalists and media should receive an equal opportunity to cover and report on protests and demonstrations. Timely investigations and firm actions against such incidents remain imperative to create a safe environment where journalism would thrive.”

19th December 2020 marked one year since the arbitrary dissolution of the Maldivian Democratic Network (MDN) by the government, highlighting the situation of freedom of association, especially for human rights groups. The government has also arbitrarily confiscated all of its funds.

As previously documented by the Monitor, the government decided to dissolve MDN after they were accused of ‘insulting the Prophet Muhammed’ in a 2016 report published by the organisation which they had retracted. The shutdown was enforced in December 2019 while the organisation was awaiting a response to clarifications made after receiving a baseless and unlawful order to terminate its operations on 5th November 2019.

Five human rights groups issued a statement reminding the government that Article 30(b) of the country’s Constitution guarantees the right to establish societies and non-governmental organisations (NGOs) and that an administrative decision was taken based on allegations of a criminal offence, depriving the organisation and the human rights defenders involved of their right to appeal in the criminal and civil processes initiated by the Government of the Maldives.

They called on President Ibrahim Mohamed Solih to conduct a fair and open enquiry into these deplorable actions and stop the harassment of the human rights community in the Maldives, as several United Nations member states had recommended during the third Universal Periodic Review of the Maldives in November 2020.

MDN had worked on a range of issues including on police reform, protection of human rights defenders and freedom of expression, against torture and enforced disappearance and other human rights issues. They had long faced threats and attacks for opposing violence by Islamist groups in the Maldives. The campaign against the organisation that led to their closure began after the government introduced new legislation on terrorism that religious extremists and criminal gangs affiliated with powerful opposition politicians feared would be used against them.

The CIVICUS Monitor has received information that there has been ongoing failure by the authorities to address the online attacks and smear campaigns against the country’s main women’s rights organisation, Uthema. As previously documented, there were calls by extremist groups for Uthema to be banned for being anti-Islam over its 2020 report to the United Nations Committee on the Elimination of All Forms of Discrimination Against Women (CEDAW). Uthema had filed their complaint with the Ministry of Youth, Sports and Community Empowerment in June 2020 and provided a statement to them in March 2021.

Further, there has been absolute silence from the Ministry of Youth, Sports and Community Empowerment with regard to an investigation against Uthema based on a complaint lodged with the police in July 2020, despite multiple follow-up efforts by Uthema lawyers to obtain a status update.

The Criminal Court scheduled a hearing on Yameen Rasheed’s murder case today after more than a month. The hearing addressed torture allegations from the accused. 1/2 pic.twitter.com/IoMtl6FdBN

On a positive note, on 7th February 2020, the Criminal Court held a hearing in the trial of the murder of blogger Yameen Rasheed. This was the first hearing of the case in almost a year. Yameen Rasheed’s family has requested the Prosecutor General of Maldives himself to represent the state in Yameen Rasheed’s murder trial, citing prosecutorial failures that led to the acquittal of key defendants in the terrorism trial of the August 2014 disappearance of Journalist Ahmed Rilwan. The family also requested the Prosecutor General to enforce his mandate under Article 223 (k) of the Constitution and ensure the rights under Article 42, especially the right to an open trial by requesting a public hearing. Another hearing was scheduled on 18th March 2021. However, the family of Yameen Rasheed was not informed of the hearing until the final hour.

As previously documented, blogger and social media activist Yameen Rasheed was found stabbed to death on 23rd April 2017 outside his apartment building. He had received multiple death threats before his murder, which he had reported to the police. Rasheed had been a vocal critic of rising religious extremism, human rights abuses, injustice and government corruption.

On 8th March, President Ibrahim Mohamed Solih revealed that foreign experts have been assigned to investigate the murder of Minivan News journalist Ahmed Rilwan and that their work would conclude with a final report by the end of this year.