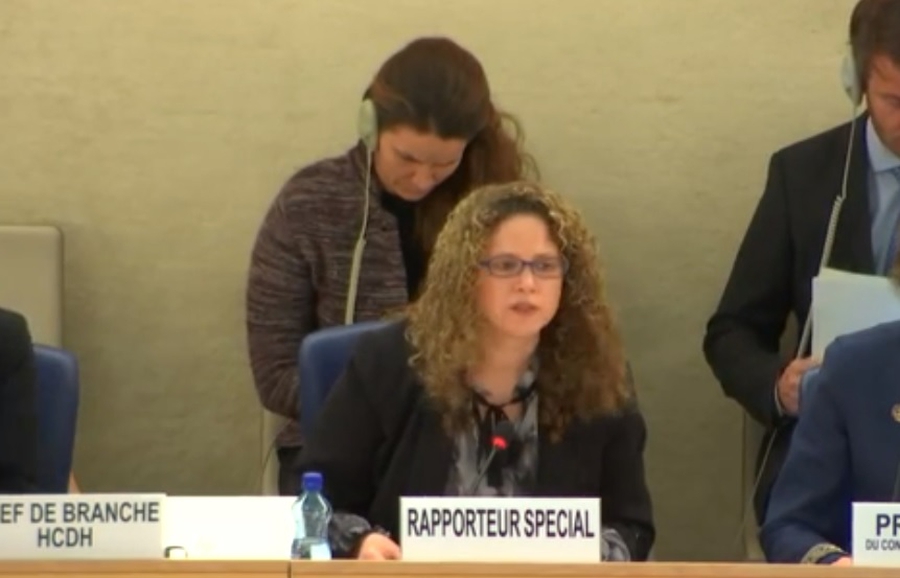 In recent months, prominent human rights organisation Maldivian Democracy Network (MDN) was shut down by the authorities over a report issued in 2016 perceived as contrary to the tenets of Islam. Concerns about this were raised by the UN Special Rapporteur in the field of cultural rights in her report in February 2020 which was presented on 4th March at the Human Rights Council in Geneva. The government has yet to resolve the cases of murdered blogger Yameen Rasheed and journalist Ahmed Rilwan who was abducted and is believed to have been killed. No progress has been reported on proposed amendments to repeal restrictive provisions of the Freedom of Peaceful Assembly Act, currently before the parliament.

In November 2019, the government decided to dissolve the Maldivian Democracy Network (MDN), the country’s leading human rights organisation. Over the years the organisation had worked on a range of issues including on police reform, protection of human rights defenders and freedom of expression, against torture and enforced disappearance and other human rights issues.

According to Human Rights Watch, MDN has long faced threats and attacks for opposing violence by Islamist groups in the Maldives. The recent campaign against the organisation began after the government introduced new legislation on terrorism that religious extremists and criminal gangs affiliated with powerful opposition politicians feared would be used against them.

Critics of the new law attacked MDN for a 2016 report entitled ‘Preliminary Assessment of Radicalisation in the Maldives’ claiming that the group had insulted Islam. The Islamic Affairs Ministry accused MDN of using foreign funds to motivate Maldivians against Islam and promised strict action. During this time, Islamist groups also issued threats on social media against MDN staff and other rights groups and activists.

On 3rd October 2019, the Islamic Ministry filed a complaint against MDN which resulted in protests, calling for harsh punishment and killings of MDN staff and members. MDN subsequently issued an apology for the ‘unfortunate use of language in some sections of the report’ and retracted the report for further review in consultation with Islamic scholars.

However, the organisation was ‘temporarily’ suspended by the Registrar of Associations on 10th October 2019. On 5th November 2019, the Ministry of Youth, Sports and Community Empowerment revoked the licence of MDN for ‘insulting the Prophet Muhammed’ in the 2016 report published by the organisation. An investigation by the Maldives Police Service, in cooperation with the Ministry of Islamic Affairs, reportedly found that parts of the 2016 report were ‘contrary to the tenets of Islam’, which amounted to blasphemy. The dissolution was based on Articles 19 (a) and (b), and Article 32 of the 2003 Associations Act. A formal announcement was subsequently made on 19th December.

.@forum_asia strongly condemns the announcement by the Maldivian authorities on 19 December 2019 that the Maldivian Democracy Network @MDN_mv has been dissolved. MDN is a prominent #humanrights organisation, and a member of FORUM-ASIAhttps://t.co/TMp6Vn9oDa #Maldives pic.twitter.com/j1IIiY19vd

Human rights groups have condemned the investigation and shutdown. According to FORUM-ASIA the investigation lacked fairness and transparency and did not abide by due process. The organisation stated that “the finding of blasphemy was based on the Maldives Police Service’s review of the report’s content in cooperation with the Ministry of Islamic Affairs, which filed the initial complaint against MDN. No details concerning the investigation – nor its findings – have been made available to MDN and the general public"..

“The MDN is being punished for exercising its legitimate right to freedom of expression. The fact that a more than four-year-old report is being cited now as grounds to shut down the NGO raises suspicions as to the true motives behind this decision. Is the new government just as intolerant of critical voices as the one it replaced?”

Responding to the shutdown, MDN reminded the Solih administration that they had pledged to protect fundamental rights. They called on the government to “reverse the decision to cancel registration, afford us due process, conduct fair investigations and, if deemed so, take proportionate action so that we may be able to assist victims of torture and injustice as we have for the past 15 years".

Following Maldives' return to the Commonwealth in February 2020, the Commonwealth Human Rights Initiative (CHRI) also called on the Government of Maldives to review the decision to shut down MDN.

In February 2020, the UN Special Rapporteur in the field of cultural rights submitted her report on her visit to the Maldives. In the report she made recommendations to the government to “stop pressuring civil society organisations to censor themselves and lift without delay the suspension on the Maldivian Democracy Network and demonstrate commitment to freedom of expression”.

Cases of killing of blogger and journalist still unresolved

As previously documented, blogger and social media activist, Yameen Rasheed was found stabbed to death on 23rd April 2017 outside his apartment building. He had received multiple death threats before his murder, which he had reported to the police. Rasheed had been a vocal critic of rising religious extremism, human rights abuses, injustice and government corruption.

According to Amnesty International’s annual report in January 2020, the trial of six men accused of the 2017 murder of Yameen Rasheed was subjected to constant delays. There have been concerns that witnesses also faced intimidation. A verdict was expected to be delivered in January 2020 but no progress has been reported.

In another case previously documented, a reporter with the Maldives Independent newspaper, Ahmed Rilwan went missing in August 2014. He was an outspoken journalist who uncovered political corruption and its links to Islamist extremism. In August 2018, the criminal court acquitted the two suspects on trial for abducting him. However, in September 2019, the presidential commission mandated to investigate unresolved murders and abductions revealed that a local affiliate of the terrorist group al-Qaeda was behind the abduction and murder of Ahmed Rilwan.

In November 2019, Parliament’s security services committee decided to launch an inquiry into a local extremist group accused of murdering Rilwan. In December 2019, it was reported that the Prosecutor General's Office (PGO) had returned the charges against two suspects sought by the Presidential Commission on Murders and Enforced Disappearances, over Rilwan’s murder. The Prosecutor General (PG) Hussain Shameem revealed that the case was sent back to complete parts of the investigation that were overlooked.

In the February 2020 report of the UN Special Rapporteur in the field of cultural rights she stated that ‘fundamentalist ideology has resulted in violence, including the disappearance and reported murder of journalist and poet Ahmed Rilwan; the killing of blogger and satirist Yameen Rasheed”. The Special Rapporteur welcomed the work of the Commission on Investigation of Murders and Enforced Disappearances and hoped that its recommendations would be fully implemented without delay, in accordance with international standards, and that all alleged perpetrators would be brought to justice.

In a joint submission for the 3rd Universal Periodic Review of Maldives at the Human Rights Council, the Asian Forum for Human Rights and Development (FORUM-ASIA) and CIVICUS: World Alliance for Citizen Participation highlighted shortcomings in Maldives’ realisation of rights to freedom of association, peaceful assembly and expression, as well as existing restrictions on human rights defenders (HRDs).

CIVICUS and FORUM-ASIA expressed concerns at the ongoing reports of harassment and threats against human rights defenders and journalists and the lack of effective action by law enforcement authorities. These concerns were echoed by Amnesty International's 2019 Asia Pacific Review of the Maldives, citing that ‘human rights defenders were targeted and subjected to verbal attacks including hate speech and death threats’.

The submission calls on the Maldivian government to ‘create and maintain, in law and in practice, an enabling environment for civil society, in accordance with the rights enshrined in international treaties and resolutions'. The Maldives is set to be reviewed at the United Nations Human Rights Council in May 2020.

(Govt. to repeal constriction on freedom of assembly) has been published on Maldives Times - https://t.co/sWU6w7u4Lq#Repeal_The_Amendment_To_The_Freedom_Of_Assembly_Act pic.twitter.com/Gv4BwQk01c

In August 2019, it was reported that the Maldives authorities were planning to review its protest law to ‘restore it to its original form’. According to the Sun, amendments to the Freedom of Peaceful Assembly Act 2013 had been submitted to Parliament and that ‘the current administration’s legislation, if passed, will repeal the constrictions placed on freedom of assembly and allow citizens to hold rallies without prior notice, and hold rallies at additional locations’. However, to date no further progress has been reported on the revisions.

Currently, the Freedom of Peaceful Assembly Act 2013 imposes undue limitations on assemblies, giving the police wide discretion in granting permission, restricting demonstrations to designated areas and limiting access by journalists. In their written UPR submission, FORUM-ASIA and CIVICUS urged the Government to amend the Freedom of Peaceful Assembly Act 2013 in conformity with international standards and best practices on the freedom of peaceful assembly.

Under the previous government of President Yameen, there were frequent violations of the right to peaceful assembly, including arbitrary arrests of protesters, attacks on journalists and excessive use of force by the police.