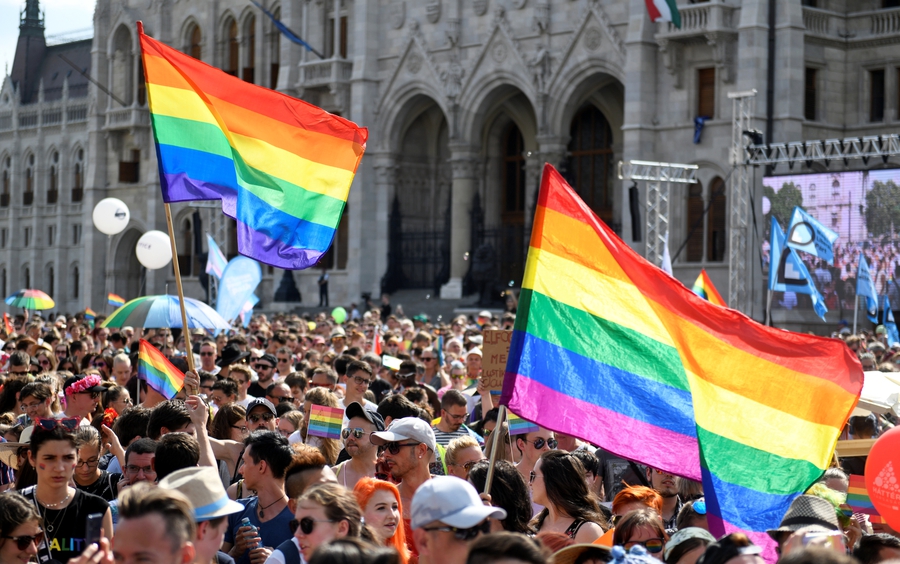 LGBTI rights have been repeatedly under attack amid the pandemic (REUTERS/Tamas Kaszas via Gallo Images).

The second wave of the coronavirus pandemic hit Hungary in early September 2020. On 3rd November 2020, the Hungarian Government declared a state of emergency due to the pandemic. On 10th November 2020, the Hungarian parliament passed a law authorising the government to use its emergency powers for 90 days. In mid-November, the Hungarian Chamber of Doctors warned that although the number of ICU beds and ventilators may now be sufficient in the country, there are not enough qualified medical professionals to treat ICU patients.

On 16th November 2020, Hungary, together with Poland, vetoed the next seven-year EU budget and the coronavirus economic recovery fund. Passing the budget and the recovery fund requires the unanimous vote of all member states. The two countries blocked approval because the budget is currently tied to upholding rule of law standards. Hungary and Poland argue that such a tie would seriously undermine their national sovereignty and that the EU has no right to determine what rule of law really is.

As previously reported by the CIVICUS Monitor, the Hungarian government, led by Prime Minister Viktor Orbán, decided to transfer ownership of the University of Theatre and Film Arts (SZFE) to a private foundation in July 2020. Furthermore, the democratically elected university Senate will be deprived of its powers, one among many being the power of electing the rector. In its place, the new charter hands over that power to a board of trustees. These few select people, who appear to be close to the prime minister, will oversee the university.

From early September 2020, supporters calling for the university’s autonomy have been showing their discontent in various ways, ranging from the occupation of the campus to people forming a human chain from the Parliament to the university and staging peaceful street demonstrations. On 23rd October 2020, on the anniversary of the1956 revolution, about 10,000 people marched through the streets of the capital for demanding autonomy for SZFE.

On 10th November 2020, as the new coronavirus restrictions were announced, students who had been occupying the campus for two months decided to comply with the regulations and moved the protests online. During the two months of occupation, lectures and academic activities continued but the newly established board of trustees has already declared that it will not recognise the students’ credits for the first semester.

On 11th November 2020, new coronavirus restrictions came into effect in Hungary. These include a general curfew from 8 pm to 5 am, mandatory mask-wearing in certain public spaces, a limit of ten people allowed in family gatherings, and online learning for high school and university students. Public gatherings are entirely forbidden. Organising a demonstration is punishable with fines up to HUF 1 million (approximately 3,000 euro), while participants can receive fines up to HUF 500,000.

As Emese Pásztor, head of the Political Freedoms Project at the Hungarian Civil Liberties Union (HCLU) told the Monitor:

"The right to assembly is basically cancelled while these measures are in place, which is an unnecessary and disproportionate interference with the exercise of political freedom”.

“Although the country is being heavily hit by the second wave, the government does not seem to have a plan and the measures are more of a “public relations” nature. For instance, they deployed soldiers in the streets but it is not clear what their purpose is”.

Impressive @444hu shot of the #SZFE demo today with a hint of #WesAnderson’s #TheGrandBudapestHotel pic.twitter.com/xjFuvaEn9O

"We are not giving up the blockade; we are taking it with us. Resistance, for a while, shall resume outside the campus.(...) The blockade will last as long as the oppression does," protesting students said at the press conference announcing that they are leaving #SZFE's building. https://t.co/03jVVGwXID pic.twitter.com/tio34VxFTC

🏳️‍🌈🇭🇺The Hungarian Parliament is going to introduce far-fetching violations of the human rights of the LGBTI-community.

🇪🇺If the EU doesn't interfere in Hungary, I don't know why I'm still paying taxes.
A Europe without values is not a Union.

Minutes before the new restrictions came into effect, the government proposed a draft amendment to the constitution. As Pásztor confirmed, the proposed changes were “totally unexpected”.

In particular, two changes will reinforce institutionalised homophobia and transphobia. A sentence will be added to Article L and will define that: “the mother is a woman; the father is a man”. The second change, Article XVI (1) will include the provision that: “Hungary protects children’s rights to their identity in line with their birth sex, and the right to education according to our country’s constitutional identity and system of values based on Christian culture”.

“Family and marriage in Hungary already have a very restrictive definition. And now the right to self-determination of children will be linked to their birth sex, which is a serious limitation on this right. Similar limitations should serve a legitimate aim, e.g. the protection of children, but it is unclear how such an amendment could serve this purpose,” - said Pásztor.

Besides the draft amendment to the constitution, draft amendments to the Civil Code and the Child Protection Act were also submitted. If the relevant amendments pass, single parents will be able to adopt only under special circumstances and their adoption must be approved by the minister of family.

We call on the Parliament to reject the amendment to the Constitution and the bill that further undermines LGBTI rights by denying adoption rights to same-sex couples.

We call on the GAC to urgently address the violations.
Our statement ⬇️https://t.co/WxagO6yWNk pic.twitter.com/vWFrKXPVJy

Amnesty International Hungary called on the Parliament to reject these amendments which will severely restrict the rights of LGBTI individuals. It also called on the European Union to address the violations of LGBTI rights in Hungary at the next hearing under Article 7.1 TEU (Treaty on European Union).

“It seems nothing will derail this government from cruelly and pointlessly targeting one of the most marginalized groups in Hungarian society, not even soaring coronavirus infections and Covid-19 related deaths. Under the pretext of combatting a misguided conception of ‘gender ideology,’ the government further restricts rights and stigmatizes thousands of Hungarian citizens”- Lydia Gall, senior researcher in the Europe and Central Asia Division at Human Rights Watch.

The proposed legislative changes came at the same time that physical, public gatherings and demonstrations became prohibited in Hungary. According to some, including Pásztor, the timing was not a coincidence.

After proposing the amendment for the constitution, Katalin Novák tweeted that the change was needed due to COVID. The amendment will stigmatize same-sex parents and transgender people, and create a basis of discrimination against LGBTQ-sensitive education programs and books. https://t.co/VOKRWaYztp

“The timing is no accident: the proposals that are severely restrictive, contrary to international and European human rights principles, were tabled in the hours following the parliamentary confirmation of the state of emergency due to COVID, at a time when citizens have no legal means, such as demonstrations, to express their disagreement. The pattern is familiar, as the government did the same in Spring. At the height of the first wave of the epidemic, the most important priority of the government was to deprive trans and intersex people of their rights. Now they do the same with rainbow families. The goal is clear: people should not focus on the shortcomings of the government’s crisis management, but the restrictive proposals pulled out of a desk drawer.”

In addition, on 10th November 2020, the Justice Committee of the Hungarian Parliament presented legislation that would abolish the Equal Treatment Authority (ETA), with the Hungarian Commissioner for Fundamental Rights absorbing its activities, in order to provide a more efficient institutional structure. Throughout the years, the ETA has been the most successful body addressing discrimination against the LGBTI community. Although the mandate of the institution will not be changed, it will be subordinate to the Commissioner, who, in contrast to the ETA, has not shown interest in defending LGBTI rights.

In a statement, ILGA Europe strongly condemned the government's attempts to reduce the efficacy of the anti-discrimination body.

On 20th November, the Council of Europe Commissioner for Human Rights, Dunja Mijatović said in a statement:

“I fear that several proposals contained in the complex legislative package, submitted without prior consultation and relating to matters including the functioning of the judiciary, election law, national human rights structures, scrutiny over public funds, and the human rights of lesbian, gay, bisexual, transgender and intersex (LGBTI) people, could serve to undermine democracy, the rule of law and human rights in Hungary.”

New details have emerged on how the public media sector is pursuing its role of being a de facto organ of the government. As previously reported on the Monitor, the media sector is under continuous attacks from the government in Hungary in an attempt to suppress freedom of expression and voices that are critical of those in power.

Recently, the details were revealed of how Hungary’s public broadcaster, MTVA, instructed its journalists to cover political questions. An investigation by Radio Free Europe found that editors at the public broadcaster were instructed on how to cover opposition parties and were told to push an anti-migrant narrative. During a leaked audio recording Balázs Bende, senior MTVA editor, told reporters “I'm sure no one will be surprised to hear that it is not the opposition's list that enjoys the support of this institution." “If anyone is not prepared to work under these conditions, he is free to file his resignation immediately," he added. Not only were reporters instructed to take a critical stance on migrant issues, but also on LGBTI issues and climate change.

In a separate development, documented by the Committee to Protect Journalists (CPJ), two journalists - Gabriella Horn (Átlátszó) and Balázs Gulyás (Magyar Hang) - were questioned by the police over their sources and use of drone footage. The journalists were summoned following the publication of their stories on their separate platforms during May 2020, which dealt with two military-grade armoured vehicles parked on the estates of a company owned by businessman Lőrinc Mészáros, former gas pipefitter turned billionaire and a childhood friend of Prime Minister Viktor Orbán. Police summoned them as witnesses in a criminal investigation into suspected illicit data collection by unknown perpetrators. Horn was interrogated over her sources, who captured the drone footage and the authorisation for the publication of the article.

“Hungarian police must stop harassing Gabriella Horn and Balázs Gulyás and drop any criminal investigation related to their reporting, which used drone footage to reveal information of public interest. It is every journalist’s job to hold powerful business leaders with close ties to governments accountable. Trying to intimidate journalists is unacceptable, and will only reinforce suspicions that authorities have something to hide,” -Gulnoza Said, CPJ’s Europe and Central Asia program coordinator.