A ‘dark day’ for LGBTI rights in Hungary, leading to calls for urgent EU action more

Unabated attacks on LGBTI rights amid the pandemic more

Concerns over democratic decline, with transgender rights and freedom of speech under attack more 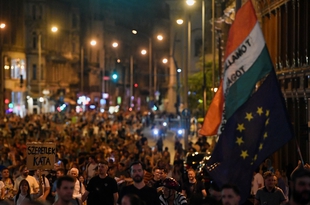 On 24th May 2022, Prime Minister Viktor Orbán declared a state of emergency in Hungary due to the war in Ukraine, thus extending his emergency powers. The state of emergency allows the government to suspend the application of some laws with no oversight. Human rights organisations raised concerns that this will further threaten fundamental rights. In mid-May 2022, the State Audit Office sent electronic letters to around 1000's CSOs regarding launching the audits on the financial status of NGOs that “influence the public and whose annual balance sheet in a given year amounts to at least 20 million HUF (50,000 Euros). Separately, on 9th June 2022, investigative media outlet Direkt36 revealed that Hungarian diplomats working in EU countries have been monitoring Hungarian journalists visiting foreign media outlets abroad.

On 24th May 2022, Prime Minister Viktor Orbán declared a state of emergency in Hungary due to the war in Ukraine, thus extending his emergency powers. The emergency powers came into effect due to the COVID-19 pandemic and were set to expire at the end of May 2022. The state of emergency, which was announced on the basis of “armed conflict, war or humanitarian disaster in a neighbouring country”, allows the government to suspend the application of some laws with no oversight. The Hungarian Civil Liberties Union, one of the country's leading human rights watchdogs, spoke out against the extension of emergency powers, stating that the move will threaten fundamental rights. In a statement, Emese Pastor from HCLU stated:

“The new normal is becoming a threat to the fundamental rights of all of us, and government by decree is further diminishing the importance of parliament The government has already used the special legal order to achieve its own power goals, and it was not driven by the intention to protect citizens”.

In an earlier development, in late April 2022 the European Commission triggered its rule of law mechanism against Hungary, which could lead to withholding budget funds if the country is found to violate EU regulations. The European Court of Justice (ECJ) supported the action, which allowed European Commission President Ursula von der Leyen to announce a formal start to the mechanism just two days after Orban's re-election on 3rd April 2022. The mechanism is intended to protect EU grants from misuse and corruption. In order to satisfy the Commission and eventually gain access to the withheld funds, in July 2022 the Hungarian government submitted a new bill to amend the rules of public consultation and participation in the legislative process. Civil society organisations have criticised the bill, pointing out that it provides no real guarantees for increased public participation and what has been missing during the last years is not a better law but “political will”. CSOs state that the government is simply not interested in consulting stakeholders, as it regularly pushes through major pieces of legislation in a matter of days. Hungarian CSOs added that:

Protecting #democracy and #RuleOfLaw can only be done when the watchdogs are allowed to do their work freely. When the public interest prevails over the private.
Our #antiSLAPP proposal will protect #journalists and safeguard freedom of expression and exercise of #HumanRights. pic.twitter.com/lOsEs1nMyy

As expected, the Commission's 2022 Rule of Law Report, released in mid-July 2022, found Hungary’s situation seriously concerning, among other things, for its lack of a strong track record in battling corruption.

As reported earlieron the CIVICUS Monitor, in May 2021, the Hungarian Parliament adopted a new law that threatens the work of CSOs. The law requires the State Audit Office to report annually on the financial status of NGOs which “influence the public and whose annual balance sheet in a given year amounts to at least 20 million HUF (50,000 Euros). It also empowers the authority to selectively audit organisations. The State Audit Office is meant to control and audit the finances of those entities that manage public money or national property. While many NGOs do not accept public funds, they will still need to shoulder the unnecessary administrative burden of the audit, under the guise of ensuring transparency. The State Audit Office will disclose its conclusions in a public report, the content of which cannot be challenged before a court.

Following this, in mid-May 2022, the State Audit Office sent electronic letters to CSOs regarding launching the audits. According tolocal media, a few thousand organisations received this letter, among them were well-known government watchdogs, while at least one very well-known pro-government organisation that regularly organises political marches did not receive such a letter.

Local sources report that the organisations were asked to upload documents on their internal regulations, accounting, and financial management - a significant administrative burden. As a result of multiple media inquiries, the State Audit Office clarified that what they are requiring is not an audit as such, but a preparatory phase for the audit. Local NGO leaders believe that a select group of organisations will have to be audited, and it is not clear what the criteria will be for selecting them.

On 23rd July 2022, about a year after Hungary passed controversial anti-LGBTQI+ legislation, thousands of people participated in the annual Budapest Pride march. The legislation, passed in 2021, prohibits the “representation or promotion” of LGBTQI+ media content to individuals under the age of 18. At the march, demonstrators gathered to defend LGBTQI+ rights and expressed support for the community’s right to equality. A smaller group of counter-protesters also gatherednext to the march’s route, carrying homophobic banners.

During a speech in Romania, Prime Minister Orban reiterated his government’s anti-LGBTQI+ position, stating that “the father is a man, the mother is a woman, leave our children alone”. In the same speech, Orban also rallied against "mixed-race" populations, triggering international political controversy. As a result, Orban’s close friend and advisor Zsuzsa Hegedus stepped down due to this “shameful position",and compared the speech to those given by Adolf Hitler. The European Parliament condemned Orban’s “inexcusable statements” as “openly racist”, declaring that:

“There is no place for racism, discrimination and hate speech in our societies. We call for further actions by EU Governments and at EU level, including against the increasing normalisation of racism and xenophobia”.

This was Viktor Orban at Baile Tusnad just now, tearing into Western Europeans for “mixing with non-Europeans”

To all the Orban-fans out there: *this* is what you’re supporting pic.twitter.com/ywsEGcy7L3

In July 2022, numerous protests took place in Hungary against new legislation that significantly increases the tax burden for 400,000 small business owners and self-employed workers, such as hairdressers, food delivery drivers, and translators. On 11th July 2022, the government presented a change to the law on tax for small business (KAT), and the next day the parliament approved it under an exceptional procedure. The new rules will come into effect on 1st September 2022, giving very little time for the affected people to prepare for the change. Protesters expressed concernsover the law, citing major tax hikes or a potential loss of work. During the multi-day demonstration in Budapest, demonstrators defied police and marched through the city centre. Protests were also held in smaller Hungarian cities.

On 30th April 2022, hundreds of protesters gathered in Budapest to demonstrate against Russia’s invasion of Ukraine. Demonstrators held banners of support for Ukraine and voiced their opposition to the war. The protest took place after earlier demonstrations against the war in Ukraine,. A smaller group of people also gatheredin the capital in support of Russia, carrying banners with pro-Russian rhetoric.

On 15th July 2022, the European Commission decided to initiate a lawsuit against Hungary for its refusal to renew the license of Klubradio (see previous update), an independent radio station critical of the government which was forced off of the air more than a year ago and now operates online. Hungarian Justice Minister Judit Varga argued that the Klubradio decision did not undermine media freedom, but the Commission maintains that this case was not in line with EU standards and values.

Another issue the European Commission is suing Hungary for at the European Court of Justice regards the law restricting access to information on LGBTQI+ issues. The Commission wants the law reversed, as it is discriminating against members of the LGBTQI+ community. The Hungarian government has been heavily criticised by human rights groups and international watchdogs for its hostile approach to LGBTQI+ people.

Separately, in April 2022 the Media Council blocked the frequency licence renewal of the independent station Tilos Rádió, which began operating in the 1990s as the first non-profit independent radio station in Hungary. The council stated that the station has violated legal requirements on four occasions. Press groups state that the decision is harmful to media pluralism in the country. The station's licence is set to expire in September 2022, after which it will be forced off the airwaves.

“Instructing embassies to help monitor their country’s journalists is an abuse of diplomatic services and a new low for the Orban government.”- Oliver Money-Kyrle, IPI’s Head of Europe Advocacy and Programmes.

“This act, and the government’s defence of it, confirms that Hungarian journalists are to be treated as enemies of the state. Embassies are to become another agent for intimidating media and closing the public’s access to news not under the direct control of the state,”- Oliver Money-Kyrle, IPI’s Head of Europe Advocacy and Programmes.

The right to freedom of peaceful assembly is largely observed in policy and practice under provisions of the Fundamental Law.

The right to freedom of peaceful assembly is largely observed in policy and practice under provisions of the Fundamental Law. However, the three-day notification requirement remains the main rule applicable to organisers of gatherings in contravention of international best practice which suggests a maximum 48 hour notification period. In contradiction of domestic law, authorities have also prevented assemblies on the assumption that criminal offences may be committed by participants. Vulnerable and minority groups, including members of the Lesbian, Gay, Bisexual, Transgender and Intersex (LGBTI) and refugee communities – have been subjected to additional barriers to their exercise of the right to freedom of peaceful assembly. On 4th June 2015, the Mayor of Budapest István Tarlós made a public statement in which he said that the Budapest Pride march - organised by the rainbow Mission Foundation, a CSO promoting the rights of LGBTI people – was ‘repulsive.’