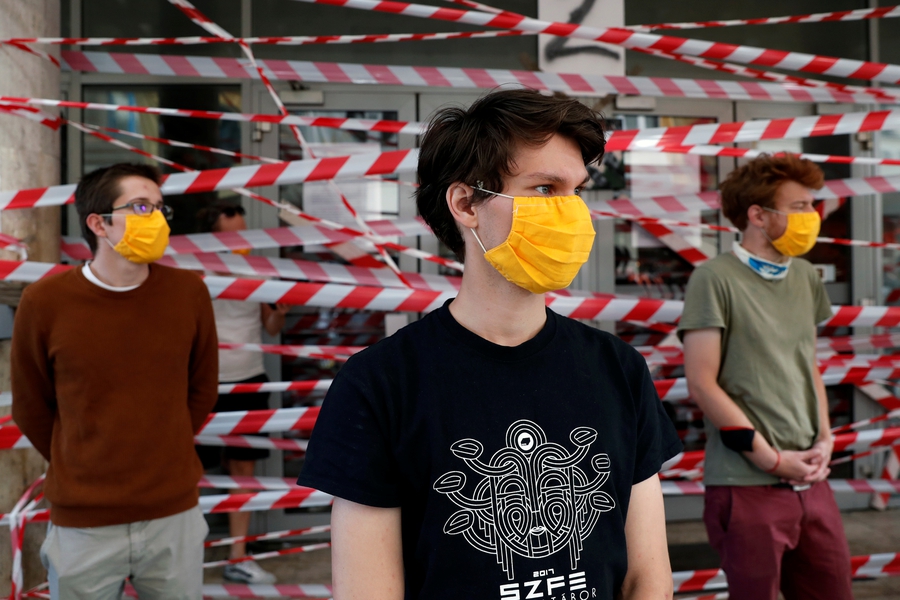 Students protest in front of the University of Theatre and Film Arts in Budapest (REUTERS/Bernadett Szabo via Gallo Images).

On 30th September 2020, the European Commission released its first (in the future annual) report, the “2020 Rule of Law Report”, on the state of democracy of its member states.

Anticipating fierce criticism, the day before the release, Hungarian Prime Minister Viktor Orban demanded the resignation of European Commission Vice President for Values and Transparency Vera Jourova for being “political” and for calling Hungary an “ill democracy”. In addition, Hungary has announced that they will establish their own rule of law institute with Poland to counter Brussels’ double standards.

To avoid double standards, respect for #RoL in Member States must be measured through an objective, impartial & non-political process. The @EU_Commission's #RoL report falls short of these criteria.

The attack on Jourova prompted the European Centre for Press and Media Freedom (ECPMF), Reporters Without Borders (RSF) and other organisations to write a letter in support of Jourova, calling on the European institutions to take swift action against Hungary for the erosion of media pluralism and the rule of law.

“So far, the lack of concrete response from the European Union has only contributed to giving more space to Prime Minister Orbán to trample on the rule of law, democracy, and press freedom.”

As expected, the report criticised Hungary’s declining judicial independence, the growing pressure on civil society and the systematic decrease in media freedom.

As reported earlier on the CIVICUS Monitor, in late July 2020, almost the entire editorial staff of Index.hu, the leading independent news site in Hungary, resigned. This decision came in response to proposals to compromise the editorial independence and the dismissal of the editor-in-chief of Index, Szabolcs Dull, by the president of the board, László Bodolai. Index was the biggest independent media outlet, and as such, has been in the crosshairs of Viktor Orban’s illiberal government which has for years set out to eliminate critical voices while concealing most of its attacks as neutral business decisions.

In a positive development, on 2nd October 2020, most of the staff who had left Index launched Telex.hu, a new independent site that plans to provide diverse, quick and accurate coverage of both domestic and global events, with a total staff of 70.

In July, we left Index behind because we had to. Now, we are launching a news site of our own because we must. But in order for it to get off the ground successfully, we need all the help we can get.

However, in a less positive development, the attacks on freedom of expression have not stopped with Index's demise. On 11th September 2020, Hungary’s Media Council decided not to automatically extend the licence of the radio station Klubrádió. Klubrádió, which is one of the few remaining critical outlets in Hungary, has, according to the government-appointed Media Council, repeatedly violated the country’s media law. For this reason, the Media Council said, the radio outlet would have to apply for a new licence. The Council has not specified how Klubrádió violated the media law. Should its application for a new license fail, Klubrádió’s only option would be to broadcast online from 15th February 2021.In a statement, the International Press Institute said:

“The Media Council’s decision rejecting Klubrádió’s renewal shows that Viktor Orbán is on a path to eradicate what remains of Hungary’s independent press. The European Union claims that press freedom and fair market competition are among its core values, yet it has so far failed to defend these values in Hungary,”- Deputy Director Scott Griffen, IPI.

In addition, Reporters without Borders (RSF) called on the European Commission to investigate the independence of Hungary’s Media Council.

“By taking a decision with such drastic consequences on such flimsy legal grounds, the Media Council is acting as if it was taking orders from the ruling party, Fidesz. The new bidding process for Klubrádió’s frequency, which the Media Council is going to organise, must be conducted in a transparent and apolitical manner. The European Commission, for its part, must investigate the Media Council’s independence under the revised EU Audiovisual Media Services Directive,”- Pavol Szalai, the head of RSF’s European Union and Balkans desk.

Independent media are not the only bodies subject to threats from Hungary’s illiberal forces. On 25th September 2020, during an online press conference, Dora Duro, a politician of the far-right party Mi Hazank (Our Homeland) attacked a new children’s book which retells fairy tales with LGBTI+ individuals as the main characters. Some days later, she yet again attacked another children’s book that involves a character who has two mothers. These books, according to Duro, amounted to “homosexual propaganda”.

The first book, Meseorszag Mindenkie (Fairy World is for Everyone), was banned shortly thereafter in all kindergartens by the local Fidesz-party mayor in one of the districts of Budapest. In addition, in a few weeks, a petition by the ultra-conservative group CitizenGO, which called for the removal of the book, had reached 85,000 signatories.

Prime Minister Viktor Orban said that although Hungarians are very understanding, they do not tolerate certain things and that gays should “leave children alone”. Bookshops selling the targeted book are already seeing the effects of the hate campaign against the book. On 6th October 2020, a poster was put on a bookshop window saying that the bookshop sells a dangerous homosexual propaganda publication.

“This falls into a larger trend of official anti-LGBTI hate speech documented in other European countries,” - Katrin Hugendubel, Advocacy Director at ILGA-Europe.

#Hungary “This falls in a larger trend of official anti-LGBTI hate speech documented in other European countries,” says @khugendubel @ILGAEurope for @TIME https://t.co/9wf1jhzxra

On 4th October 2020, the Budaházy brothers, leaders of a far-right, homophobic movement disrupted a matinee performance of Meseorszag Mindenkie.

According to the Hungarian Helsinki Committee, the police failed to meet its obligations in terms of the law and by international standards in at least three aspects.

Upon being informed of the protest and knowing the track record of the Budahazys, the organisers decided not to have a live audience and instead moved the event online.

Since 31st August 2020 students from the University of Theatre and Film Arts have staged protests against the Orban government’s infiltration of their university. Protests were sparked by a July 2020 decision by the Fidez ruling party to transfer ownership of the university to a private foundation and the appointment of a board of five trustees, closely linked to Orban. This prompted the resignation of the school's administration and several teachers. Over the past few months, six other universities have undergone similar changes, raising concerns about the further dismantling of academic freedom and free expression in the country.

As part of the protests, thousands of students formed a human chain from Parliament to their university. On other occasions they have also occupied a key part of the university building and blocked access to the new administration.