Clash between protestors and police; Media under sanction more

Activists protest to demand investigations into death of HRD more

Journalist killed, as activists protest against corruption in government more 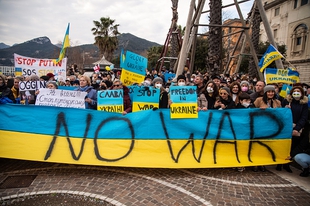 On the morning of 24th February 2022, Ukrainians woke up to a military operation launched by Russia, with explosions heard across the country. In a remarkable show of solidarity with Ukraine, across the world, people took to the streets to denounce the Russian invasion

At the end of 2021, the U.S. declared that Russia had built up more than 100,000 troops near Ukraine. Russia denied planning to invade but insisted on receiving written security guarantees and NATO withdrawal at the 1997 borders. The U.S. leadership released classified information about a possible attack from the Russian side in the middle of February.

On 15th February 2022, the State Duma supported the resolution to recognise the so-called separatist republic of Donetsk and Luhansk. The request was sent to Russian President Vladimir Putin. Days later, on 22nd February 2022, Russia’s parliament officially allowed the Kremlin to send troops into foreign territory.

Following these developments, on 23rd February 2022, Ukraine declared a 30 day nationwide state of emergency as fears of war increased. The state of emergency applies to all regions in Ukraine apart from Donetsk and Luhansk, where Ukrainian forces have already been at war with Russian-backed separatists for almost eight years. The state of emergency will allow authorities to impose restrictions on the freedom of movement of conscripted reservists and restrictions on the distribution of information and media. It also gives authorities a right to impose a curfew and ban mass gatherings and strikes.

On the morning of 24th February 2022, Ukrainians woke up to a military operation launched by Russia, with explosions heard across the country and Ukraine’s foreign minister warning a “full-scale invasion” was under way. In the days that followed, Russian forces embarked on a full on offensive in Ukrainian cities, in what Putin said was intended to topple the Ukrainian government. In a remarkable show of solidarity with Ukraine, across the world, people took to the streets to denounce the Russian invasion. Massive protests were documented in Georgia, Cyprus, Spain, Israel, Estonia, Germany, Czech Republic, and even in Russia – despite the great personal risk involved.

Thousands of Ukrainians join the March of Unity

As tensions over Ukraine's security intensified in the months leading up to the end of 2021, and with the deterrence actions against Russia seeming unsuccessful, Ukrainians organised several protests against Russian aggression.

On 12th February 2022, several thousand people took part in a March of Unity in Kyiv to protest against a possible Russian invasion. Ukrainians marched to Independence Square while singing the national anthem. According to Radio Free Europe, Ukrainians aimed to create solidarity across the world for Ukraine and against Russia's aggression.

On 7th October 2021 - the World Day for Decent Work, protest actions were held in Kyiv to demonstrate against the government's policy of suppressing the rights of working people. In the announcement about the protest actions, the organisers explained that they would hold an all-Ukrainian demonstration in Kyiv to declare their rights to work, decent living conditions, decent wages and safe working conditions.

According to a press release published by the protest organisers, the Federation of Trade Unions of Ukraine led a protest march from all-Ukrainian trade unions of various industries and trade unions, which passed through the capital's central streets to the Government House. As an act of solidarity with the protesters, the Trade Union of Education and Science Workers of Ukraine joined the movement and called on the authorities to stop the restriction of the rights and guarantees of educators.

During the meeting with the Prime Minister of Ukraine, Denis Shmygal, the negotiating group from the trade unions raised the issue of teachers' salaries, scholarships, allowances and surcharges, among other issues.

Local protests of professionals took place in other cities in Ukraine. On 28th October 2021, protests of Transcarpathian doctors and cultural workers were organised at the building of the Regional State Administration.

Participants of the Safe FOP action (Ukrainian public movement, whose members advocate for the rights of entrepreneurs, freedom of entrepreneurial activity and the preservation of a simplified system of taxation, accounting and reporting) gathered outside the Verkhovna Rada (the unicameral parliament of Ukraine) during the president’s speech on 1st December 2021. They asked the authorities to postpone the mandatory introduction of cash registers.

Two weeks later, on 14th December 2021, another protest action of entrepreneurs took place near the building of the Verkhovna Rada. The protesters demanded the abolition of the mandatory introduction of cash registers for small businesses. The police stopped the march by setting a massive border on Shovkovychna and Hrushevskoho streets. Reports indicated that one protester was detained by the police.

According to Glavkom, several hundred protesters also gathered outside parliament on 17th December 2021. Entrepreneurs protesting near the Verkhovna Rada blocked part of the roadway on Hrushevskoho Street. RBK-Ukraine reported that the protesters lit fires and clashed with police.

Days later, on 25th January 2022, another rally organised by the individual entrepreneurs outside the Ukrainian parliament in Kyiv ended in clashes with the police as the protesters tried to storm the parliament building. According to Radio Free Europe, around 2,000 people joined the demonstration organised by the #SaveFOP movement dissatisfied with the new tax regulations that would considerably affect small businesses. 18 officers and three protesters were injured during the clashes and 63 people were detained for a short time.

The protests continued in February 2022 as well. Participants of the #SaveFOP movement marched on 17th February 2022 to the European Square, after which they returned to the Verkhovna Rada.

Following the attack on photojournalist Oleksandr Kuzhelny, who was assaulted after a rally on 14th August 2021, as previously reported by CIVICUS Monitor, Ukrainian photojournalists gathered in Kyiv on 17th August 2021 to demand security for journalists. The protesters held placards reading "Where is Security?", "Journalists are not a target." Hromadske TV reported that the protesters demanded that those responsible for the attacks on journalists be punished. During the rally, the representative of the Institute of Mass Media, Anna Chabaray, said that since the beginning of 2021, the Institute of Mass Information documented 111 cases of aggression against members of the press. According to the Press Freedom Barometer, which is compiled by the Institute for Mass Information, most violations of media activity were related to limiting access to public information, restricting journalists' access to meetings of local public administrations or even physical aggression.

On 5th December 2021, two cars belonging to a local journalist, founder and editor of the ZIDO news agency Pavlo Biletsky in Uzhhorod were set on fire. Following the attack, the journalist suggested that the arson was due to his journalistic activities. The police opened investigations.

Following the arson attack on the cars, the Committee to Protect Journalists called on authorities to investigate the alleged arson attack and hold those responsible to account.

“We call on Ukrainian authorities to conduct a swift and thorough investigation into the alleged arson attack on investigative reporter Pavlo Biletskiy, and to consider his reporting as a likely motive… Biletskiy’s work serves the public interest, and his safety and well-being must be ensured.”

Days later, on 10th December 2021, it was reported that the Security Service of Ukraine and the National Police uncovered another arson attack on a car belonging to a local newspaper journalist in Zakarpattia. The pre-trial investigation established that the suspects entered the journalist's house, doused his vehicle with a combustible mixture and set it on fire. According to reports, the police established the identities and whereabouts of the perpetrators as investigations ensued.

On 11th February 2022,the National Security and Defense Council of Ukraineimposed sanctions on pro-Russian politician Yevhen Muraev's Nash TV channel. The restrictive sanctions were imposed on Nasha Prague, NASH 24, NASH 365 for a period of five years. According to Kyiv Post, the Nash TV channel has been embroiled in lawsuits with the nation’s TV and radio regulator and fined $1,781 for violating the Ukrainian language quota. The legal framework requires that at least 75% of the broadcast content be in the state language.

President Volodymyr Zelenskyi approved the decision of the Defense Council to impose sanctions on Nash TV channel (Decree №52 / 2022). The Decree came into force on the day of its publication, after which Muraev declared that the channel would announce indefinite protests.

A year earlier, on 2nd February 2021, the National Security and Defense Council of Ukraine also closed TV channels 112 Ukraine, ZIK and NewsOne which are affiliated to Viktor Medvedchuk, leader of pro-Russian Opposition Political Party - For Life. The opposition leaders criticised the decision and challenged it in court, but the Supreme Court dismissed the petition. Later, Viktor Medvedchuk was detained and accused of treason and the illegal exploitation of natural resources in Ukraine's Russian-annexed Crimea.

On 27th September 2021, the President of Ukraine, Volodymyr Zelenskyy, approved the National Strategy for Civil Society Development in Ukraine for 2021 - 2026. The Strategy aims to create favourable conditions for the development of public initiative and self-organisation in society, the formation and operation of civil society institutions and the establishment of partnerships, including with public authorities and local governments.

According to the Decree, the Cabinet of Ukraine will provide, with the participation of civil society, three-year action plans for the implementation of the Strategy, work on creating effective mechanisms of financial support for the implementation of the Strategy and identify tools for proper coordination and monitoring of the Strategy implementation. The document also mentions the role of local authorities in Strategy implementation. in this regard, Kyiv city state administrations will work to create favourable conditions for the development of civil society at the regional and local levels. They will also ensure the creation of regional coordination councils to promote civil society development with the involvement of representatives of relevant local state administrations, local governments, territorial bodies of ministries and other central executive bodies and, on a parity basis, representatives of civil society institutions, international organisations, scientific institutions and experts.