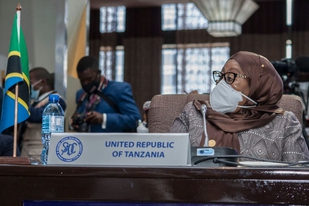 We highly commend that H.E. President Samia Suhulu Hassan of #Tanzania 🇹🇿 kept her promise to meet leading CHADEMA opposition representative Tundu Lissu in his exile in Brussels. This is a good step towards pluralism and #democracy

A Tanzanian court has released Freeman Mbowe, the chairman of the main opposition party, after the prosecution decided to drop the charges brought against him in 2021.

Mr Mbowe was facing charges of terrorism and economic sabotage.

During the trial against Freeman Mbowe, chairperson of the country's main opposition party Chama cha Demokrasia na Maendeleo (Swahili for Party of Democracy and Progress), popularly known as Chadema, the 13th prosecution witness in the case, a Mr Swila, claimed to be ill while being cross-examined by defence counsel. As a result, the High Court judge adjourned the case to 14th February 2022. The judge instructed the lawyer to ensure Mr Swila attended the proceedings on the 14th or bring in other witnesses. Two other witnesses fell ill during cross-examination on separate occasions. As previously reported by the Monitor, Mbowe was charged with terrorism-related and economic crimes.

On 18th February 2022, the High Court ruled that the case against Freeman Mbowe would proceed. Judge Joachim Tiganga stated that "without going into details," the court believed the prosecution's evidence was sufficient to require the defendants to respond to five of the six allegations against them. The verdict came after the state prosecutor unexpectedly finished filing evidence against the Chadema party leader on 15th February 2022.

On 4th March 2022 however, the Director of Public Prosecutions submitted a motion to dismiss the terrorist accusations against Freeman Mbowe and his three co-accused in the High Court Division of Corruption and Economic Sabotage Offences. Mbowe and the three other opposition members were freed. According to his lawyer, the release was unexpected; "we did not know it would happen; we had spent the whole day in prison yesterday preparing Mr Mbowe and his co-accused for their defence."

Protest by Maasai people led by women in Ngorongoro chanting “Our land, our life” #ShangaziPower
They are protesting forced eviction by the govt of #Tanzania from their ancestral land
Cc @VP @KGeorgieva @mbachelet @DavidMalpassWBG @UNHumanRights @hrw @achpr_cadhp @StateDRL pic.twitter.com/A6n7BSF4bh

On 28th February 2022, Masaai residents gathered in Endulen, Oloirobi and Olbalbal to protest the Tanzanian government's intention to evict 167,000 Maasai from the Ngorongoro Conservation Area (NCA) and Loliondo to make way for trophy hunting and elite tourists. The residents blocked the entrance to the NCA, a well-known UNESCO World Heritage Site in northern Tanzania, as part of their protest. Separately, the Maasai residents received solidarity from activists outside the country.UK-based youth activists gathered in front of the Tanzania High Commission and at the London and Edinburgh offices of Trailfinders and Kuoni travel agencies – both working in Northern Tanzania – in support of Maasai protesters. The activists held placards with slogans such as ‘No Tourism where Maasai are Evicted’.

In an effort to protect journalists and the media industry, the government plans to amend the Media Services Acts (2016). The Minister for information, communication and information technology, Nape Nnauye, stated that President Suluhu approved the amendment of the Act and the ministry was ready to "act accordingly". The Media Services Act has previously been criticised for giving the government arbitrary powers that limit independent media and effectively censor them. The Act creates strict rules for journalist accreditation and gives broad oversight powers to government agencies to ban, suspend and fine newspapers.

In other developments, the government issued new publishing licenses to four newspapers, namely, Mwanahalisi, Mawio, Mseto and Tanzania Daima, which were banned during late President John Magufuli's rule. According to Nape Nnauye, Hassan ordered the reinstatement of the papers' licences as part of her vow to protect press freedom.

In less positive developments on media freedom, eight journalists were arrested in the first two months of 2022. On 4th February 2021, Ngorongoro police officers arrested six journalists covering a public meeting organised by the residents to discuss threats of forced eviction (see above in peaceful assembly section). The residents invited journalists to amplify their message on media platforms. However, the authorities held and harassed the six journalists after the meeting and released them later. The Tanzanian Human Rights Defenders Coalition believes that this incident resulted in self-censorship, as the information gathered in the meeting was not publicly shared. In a statement issued by the Coalition, "the six journalists feared to disclose any condition given to them in relation to information gathered from the community meeting".

On 24th February 2022, police officers in Arusha unlawfully arrested and held Global TV journalist Kolumba Victor and Kusaga Online TV journalist Alphonce Kusaga. The arrests were made after the journalists interviewed citizens who reported an incident where local security guards and a policeman allegedly harassed them and looted their money.

Article 20 (1) of the Constitution of Tanzania guarantees the right of peaceful assembly. A notification must be provided to the police 48 hours before holding a demonstration.

Article 20 (1) of the Constitution of Tanzania guarantees the right of peaceful assembly. A notification must be provided to the police 48 hours before holding a demonstration. The police can deny an assembly if it considers the assembly is likely to ‘cause a breach of the peace, prejudice the public safety or public order, be used for any unlawful purpose, or for failure to notify in the required time period.’ The Police Force and Auxiliary Service Act 2002 also establish that an assembly of three or more people, who do not obey orders to disperse when requested, would be classified as an “unlawful assembly”. In practice, sometimes security forces used excessive force to disperse peaceful protestors and even arrest protest organisers.

The constitution guarantees the right to freedom of expression, however this right is undermined by a number of laws including the National Security Act and the recently enacted Statistics Act and Cybercrimes Act that severely curtail media freedoms and access to information.

The constitution guarantees the right to freedom of expression, however this right is undermined by a number of laws including the National Security Act and the recently enacted Statistics Act and Cybercrimes Act that severely curtail media freedoms and access to information. In 2016, the Media Services Act was enacted, replacing the problematic Newspaper Act (1976) and the Tanzania News Agency Act (1976). Despite its stated intention to ‘professionalise’ the sector, new Act contains restrictive provisions and has been heavily criticised by media workers and free expression advocates throughout its drafting. In practice, journalists in Tanzania face harassment, threats and detention. Tanzania boasts several independent newspapers and numerous online news-sites and blogs. Nevertheless, government-aligned media dominates the television space. There are no overt restrictions on access to mobile phones or internet technology, but access to a decent internet connection is out of reach for many. As part of the crackdown on the LGBTI community, in 2016 the government announced that it would monitor the social media accounts of citizens who identify as LGBTI, and their followers. The Media Council of Tanzania, a self-regulation body, has been effective at improving standards of journalism while defending the rights of its members in cases where they have been harassed or attacked. The Council documented 20 freedom of expression violations in 2015.