Another Friday in Gaza: Protesters Threatened by Israeli Tanks more 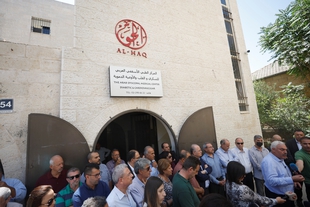 On the morning of 18th August 2022, the Israeli occupying forces (IOF) entered, raided and sealed the entrances to the offices of seven CSOs, damaging and confiscating property while doing so. Following the raid, IOF attached a new door to the organisation’s offices and welded it shut to prevent any future access, attaching a military order announcing the association’s closure under Article 319 of the Emergency Regulations, of 1945.On 18th December 2022, Israeli occupation authorities unlawfully and forcibly deported Jerusalem born French-Palestinian lawyer Salah Hammouri, exiling him to France. This comes after Israel’s Supreme Court rejected Hammouri’s appeal against the revocation of his right of residence in Jerusalem on 29th November 2022. Additionally, several HRDs and journalists were targeted

On the morning of 18th August 2022, the Israeli occupying forces (IOF) entered, raided and sealed the entrances to the offices of seven CSOs, damaging and confiscating property while doing so. The seven CSOs were: Addameer Prisoner Support and Human Rights Associaton, Al-Haq, Bisan Center for Research and Development, DCI-P, HWC, UAWC and the Union of Palestinian Women’s Committees. Six of the CSOS had been designated as ‘terrorist’ and unlawful in 2021, while HWC was designated as ‘terrorist’ in January 2020.

A statement by Al-Haq describes how IOF conducted the raid:

“Armed military forces broke into Al-Haq, systematically raiding each room and blasting the hinges off the locked doors of the finance department, the administrative office, the General Director’s office, and the main server room, causing material damage. The military rummaged through files, scattered and displaced accounting folders to the ground, knocked over coffee cups leaving spillages, and trashed offices, and trashed bathrooms.”

Following the raid, IOF attached a new door to the organisation’s offices and welded it shut to prevent any future access, attaching a military order announcing the association’s closure under Article 319 of the Emergency Regulations, of 1945.

BREAKING 🚨 The Israeli occupation forces raided UAWC’s office early this morning 18th of August, as well as the offices of the other #6organizations. They destroyed office equipment, confiscated materials and left a closing order behind. pic.twitter.com/hVaHrRIaKS

“Despite the designations and military orders for our closure, we in Palestinian civil society are doing everything within our means to continue our work, at great personal risk, because we know that our communities need us. Without meaningful international intervention though, Israel will not cease its attack until our organizations and wider Palestinian civil society has been fully defunded and shut down. Who would be hurt most if the Israeli regime is allowed to succeed in this effort?”

The statement issued by PNGO stated:

“Palestinian CSOs continue to face decisive and systematic clampdown, severe restrictions on the freedoms of expression, peaceful assembly and association, all of which contribute to the closing of an already shrinking civic space. Such unlawful acts are being used to silence Palestinian human rights defenders, journalists and civil society representatives.”

In addition, hundreds of civil society organisations showed solidarity and called upon the international community to demand that Israel immediately revoke its designations of Palestinian human rights and civil society organisations as “terrorist organisations,” reverse the military orders designating the organisations and closing their offices and repeal its Anti-Terrorism Law (2016) as it does not meet basic human rights standards. A specific call has been directed to the European Union as it announced its goal to unconditionally upgrade the Union’s economic and political ties with Israel through the establishment of an Association Council. In this regard, Euromed Rights pointed out that the current context for civil society in Palestine is no longer about “shrinking space” anymore, but rather the facts on the ground indicate that there is no space at all.

Concerningly, three days later on 21st August 2022, Shawan Jabarin, Al-Haq’s director, received a threatening phone call from IOF summoning him for an interrogation. The person, who identified himself as Captain Fahed of the Israeli Security Service, stated that a ‘personal price’ would be paid if Al-Haq continued its work. Later that day, Khaled Quzmar, General Director of DCI-P, was summoned for interrogation at the Ofer military base by a Shin Bet agent. Quzmar, who was escorted to the base, was not permitted to have his attorney with him. He was released after spending two hours in custody. Al-Haq sent an urgent appeal to the UN special procedures calling for the international community to take immediate ‘targeted and effective action’ to protect human rights defenders and CSOs in Palestine who are facing ‘existential threats’. On 24th August 2022, UN experts published a statement condemning Israel’s ‘escalating attacks’ on Palestinian civil society.

In a separate case, on 6th August 2022, B’Tselem field researcher Nasser Nawaj'ah was detained by IOF. He was blindfolded and handcuffed, taken from his home in a Palestinian village in the occupied West Bank and held for 12 hours in an undisclosed location where he was questioned about his work.

As reported by Human Rights Watch, on 5th November 2022, Palestinian activists organised a conference via Zoom titled: 14 Million: Palestinian Popular Conference,” to discuss democratisation in Palestine. Activists had planned to meet in Ramallah in the West Bank at the offices of Popular Alliance for Change to participate in the meeting. However, the Palestinian Authority (PA) raided Popular Alliance’s office, detaining and questioning two activists at a police station for several hours, and confiscated the phone of a third activist, according to the Palestinian rights group Lawyers for Justice. Attacks by the PA against the Popular Alliance continued. On 8th November, security forces shut down a press conference held by the Popular Alliance. Two days later, they blocked activists from entering the offices, stating that they had an order to shut it down.

During the reporting period covering the last six months, several violations on human rights defenders, journalists and media attacks have been documented by several Palestinian organisations.

On 18th December 2022, Israeli occupation authorities unlawfully and forcibly deported Jerusalem born French-Palestinian lawyer Salah Hammouri, exiling him to France. This comes after Israel’s Supreme Court rejected Hammouri’s appeal against the revocation of his right of residence in Jerusalem on 29th November 2022.

Several NGOs, including Human Rights Watch, called on French President Emmanuel Macron to act against the expulsion of Hammouri. Several UN experts noted that the expulsion constitutes a “war crime.” The deportation of protected persons from occupied territory is prohibited under Article 49 of the Fourth Geneva Convention, they recalled.

#Israel’s decision to deport French-Palestinian human rights defender and lawyer Salah Hammouri to France against his will may constitute a war crime under the Geneva Convention – UN experts: https://t.co/hK39NuxjII pic.twitter.com/3mYxkhujqL

On the evening of 28th November 2022, Israeli forces arrested human rights defender Issa Amro after he was summoned for an investigation at the Ja'bara Israeli police station. The arrest of the human rights defender happened days after he documented and published a video of Israeli soldiers violently attacking an Israeli activist during a solidarity visit.

On 18th September 2022, human rights defender Hafez Huraini was detained after being injured as a result of an attack by Israeli Settlers. On 22nd September 2022, he was released from an Israeli prison after spending 10 days in detention pending investigation for alleged attempted murder, harming the security of the area and severe assault.He has been temporarily released on bail, a third-party guarantee, and on condition he stay away from his own land, where he was attacked, and from the nearby settlement outpost, for 30 days.

Incidents against journalists and media freedoms

During August, a total 143 violations of media freedoms were documented, 59 by the Israeli occupation, while social networks recorded 77 violations, and the Palestinian attacks amounted to seven violations. These include:

Palestinian journalist Lama Ghosheh, who is under house arrest continues to be banned by Israeli occupation from using social media after her hearing at an Israeli court was pushed back. pic.twitter.com/TqzTeBhY2P

During October a total of 81 violations were documented, 66 by the IOF, and five by Palestinian authorities, including:

During November 2022 , 21 violations were reported, 12 committed by the IOF, seven committed by various Palestinian authorities in the West Bank and Gaza Strip, and two committed by social media corporates. These include:

The Arab Center for the Advancement of Social Media in cooperation with a group of local, regional and international civil society organisations, launched the “Meta, Let Palestine Speak” campaign. The purpose of the campaign is to call on Meta (Facebook & Instagram) to end its discriminatory policies and practices against Palestinian content across its platforms. The campaign comes as a direct response to the recently published independent Human Rights Due Diligence Report issued by the global non-profit Business for Social Responsibility (BSR), and the campaign includes coordinated efforts to send emails to Meta executives. On 22nd September 2022, BSR published its Human Rights Due Diligence Report examining Arabic and Hebrew content on Meta’s platforms in the Israel/Palestine context during May 2021. The report provided evidence of Meta’s bias against Palestinian content through the over-enforcement of Arabic content, and under-enforcement of content moderation policies on Hebrew language content. Furthermore, the report cites adverse human rights implications for Palestinians’ right to freedom of expression, freedom of assembly, freedom of political participation, and non-discrimination. Their efforts entail a coordinated social media campaign and a detailed and interactive official campaign website.