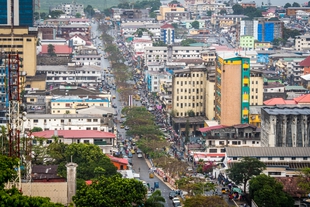 On 27 August, thousands of peaceful anti-rape protestors were attacked and tear gassed by police in Monrovia on the third day of a series of protests in connection with the 'March for Justice' campaign. Demonstrators attempted to gather in front of Liberia's government offices to present a petition demanding urgent action from President George Weah and the government to address rape and sexual violence against women.

On 27th August, thousands of peaceful anti-rape protestors were attacked and tear gassed by police in Monrovia on the third day of a series of protests in connection with the 'March for Justice' campaign. Demonstrators attempted to gather in front of Liberia's government offices to present a petition demanding urgent action from President George Weah and the government to address rape and sexual violence against women.

Police blocked government buildings and assaulted protesters. The number of rape cases and sexual, gender-based violence has drastically increased in the country and protestors described it as a pandemic, declaring that:

“We have a rape pandemic in the midst of the Covid-19 pandemic. There have been hundreds of rape cases across the country and the numbers keep climbing exponentially”.

2011 Nobel Prize winner Leymah Gbowee condemned the violent attacks on anti-rape protesters in a tweet in which she described the police's response as "sick, appalling and a big shame on the part of the George Weah-led administration".

ARTICLE 19 denounced the use of tear gas against the peaceful protesters. Fatou Jagne Senghore, regional director of ARTICLE 19 West Africa, declared that:

“Protest is a right. The police have no reason to use any force against peaceful protesters. Instead, the government must listen to the women’s voices and take decisive action to end the shocking cycle of rape against women and girls in the country”.

I woke up this morning to news of the government of Liberia clamping down on the peaceful protest organized by young people against the pervasive rape culture in Liberia.

This is sick, appalling, and a big shame on the Weah-led administration. pic.twitter.com/oFhMObEXM0

Protests over lack of electricity in communities

On 16th June 2020, Noah Gibson, a visually-impaired political activist and critic of the Weah-led government, was released from police custody after spending more than five hours at the headquarters of the Liberian National Police in Monrovia. Gibson and residents of Jacob Town community had been arrested for protesting the lack of electricity in the community which has not had sufficient light for a year.

“For nearly a year now, we have been in darkness. We have called on the Liberian Electricity Corporation, informing them about our plights and they made lots of promises and those promises cannot be fulfilled,” said Gibson.

At the police station, human rights activists advocated for Gibson's release. The activists was finally released after police agreed to Gibson's demands to release all detained protesters.

Authorities in #Liberia should investigate the attack and arrest of journalist Max M. Richards Jr. and hold those responsible to account - @pressfreedom

On 9th July 2020, Max Richards Jr., a reporter with the privately owned Hott FM radio, was attacked by at least 15 officers from Liberia’s Drug Enforcement Agency (LDEA) after he witnessed and photographed them arresting a motorcyclist. The journalist tried to find out the motive behind the arrest but the LDEA officers refused to answer. The officers seized the journalist's camera and beat and threatened him. He was detained for about 30 minutes before being released. Angela Quintal, Africa programme coordinator with the Committee to Protect Journalists responded to the incident, stating that:

“The brutal attack and unwarranted arrest of journalist Max Richards Jr. are entirely without justification, and the officers responsible must be held to account’’.

On 13th September 2020, senior reporter Omaska Jallah with The News newspaper was attacked by at least 30 people while the journalist was reporting on a voter registration programme in Latia. He was filming a group of men trying to register illegally ahead of Liberia’s 8th December 2020 senatorial elections when the men clashed with others trying to stop them from registering. When the men saw Jallah recording the confrontation, they started beating him with sticks and shoved him to the ground. The journalist sustained severe injuries to his head, while the attackers left the scene.

In the context of the upcoming #Liberia elections and following the assault on journalist Omaska J. Jallah by political party activists on September 14, @RSF_inter urges authorities to ensure the safety of journalists #PressFreedom @GeorgeWeahOff pic.twitter.com/LYToh7wAwI

Political parties in Liberia are known to engage in what is known as 'trucking' i.e. transporting voters to constituencies other than their own to influence the election results. The Centre for Media Studies and Peacebuilding condemned the electoral violence, including attacks on journalists and Angela Quintal with the Committee to Protect Journalists declared that:

"Journalists in Liberia must be free to cover elections and other matters of public interest without being violently attacked”.