Protests against mandatory COVID-19 vaccinations; right to protest under threat during pandemic more 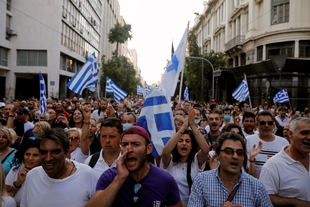 Protests against mandatory COVID-19 vaccinations; right to protest under threat during pandemic

On 14th July 2021, over 5,000 people gathered in Athens to protest Greece’s vaccination programme, after the government ordered mandatory vaccinations for health care workers and nursing home staff In addition to Athens, people gathered in other cities including Thessaloniki, Ioanninia and Heraklion. Police officers used tear gas and water cannon to disperse the crowd in Athens. Human rights watchdog organisation Amnesty International issued a statement, stating that Greek authorities have used the COVID-19 pandemic as a pretext to violate the right to peaceful protest.

In Greece, as in many other European countries, coronavirus infections are on the rise again due to the spread of a more contagious (“Delta”) variant of the virus. This has led to the government implementing restrictions such as only letting vaccinated or recovered people into certain indoor venues. Additionally, some local restrictions will be enforced in areas with a high number of cases. On the island of Mykonos, for example, a nightly curfew from 1 am to 6 am has been introduced as well as a ban on music in public venues. In late July 2021, police presence on party isles was increased as concerns mounted over local venues failing to comply with health measures aimed at combatting the pandemic.

In an independent development, according to a damning European Parliament report, the EU border agency Frontex has failed to protect the human rights of asylum seekers. While the fact-finding mission did not find evidence that Frontex participated in illegal pushbacks, the report concludes that:

“the agency found evidence in support of allegations of fundamental rights violations in [EU] member states with which it had a joint operation, but failed to address and follow-up on these violations promptly, vigilantly and effectively."

On 14th July 2021, over 5,000 people gathered in Athens to protest Greece’s vaccination programme. In addition to Athens, people gathered in other cities including Thessaloniki, Ioanninia and Heraklion. The protests came after the government ordered mandatory vaccinations for health care workers and nursing home staff following a rise in new infections. Those workers who fail to vaccinate may be suspended without pay. Government officials believe that the increase in cases can be traced back to crowded entertainment venues. Consequently, the government announced new measures allowing indoor facilities to allow more guests, only if they are willing to function as “immune only” venues. Mixed venues that can be visited by people with a fresh negative test result are allowed to function at a lower level of capacity only.


So far, Greece has fully inoculated about 41 percent of its population but is trying to bring that rate up to 70 percent by the start of the school year. Moreover, Greece will start inoculating teenagers aged 15-17. Protesters vehemently voiced their dissent by shouting “hands off our children” and held banners which read “We Say No to Vaccine Poison.” Police officers used tear gas and water cannon to disperse the crowd in Athens.

On 14th July 2021, the human rights watchdog organisation Amnesty International released a communication stating that Greek authorities have used the COVID-19 pandemic as a pretext to violate the right to peaceful protest. According to the communication, authorities have used arbitrary arrest, blanket bans on protests and unlawful use of force, such as the employment of water cannon and chemical irritants against protesters, to curb peaceful protests between November 2020 and March 2021. Amnesty International points out that even during a pandemic, limitations on human rights must be subject to strict criteria and assessed on a case-by-case basis.

“The Greek authorities used shocking tactics to try to scare women’s rights activists, trade unionists, members of political parties, lawyers and others who were participating or called for participation in peaceful protests in November and December 2020 after the country entered its second lockdown. Many were arbitrarily arrested, criminalized and handed unjustified fines in a blatant abuse of power by authorities,”- Kondylia Gogou, Greece Researcher at Amnesty International.

Authorities must stop abusing their power. Everyone has the right to peaceful protest.https://t.co/buDiBCZeUf

On 10th June, workers staged a protestover planned labour reforms, which they believe will undermine workers’ rights. The strike action is reported to have brought public transport, including ports to a standstill. At least 10,000 people joined the rally outside parliament, which is expected to vote on the bill this month. Amid protests, on 16th June 2021 lawmakers approved the bill.

“We are concerned. I cannot prove that this arrest is related to her work as a journalist, but Ingeborg had written a critical piece in the NRC two days earlier. It shows to me that the position of journalists in Greece is very vulnerable.”