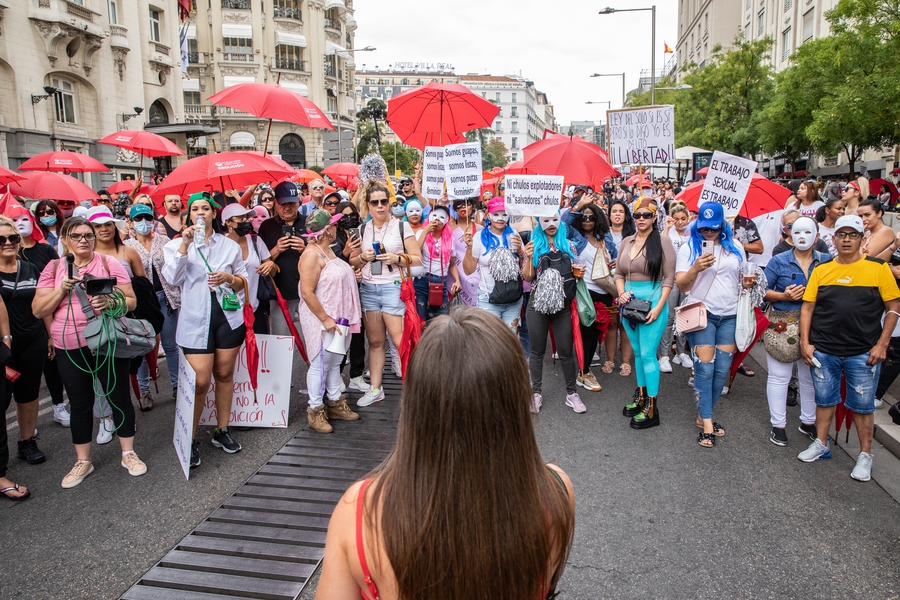 Sex workers and their supporters protest in front of the Spanish Parliament (Photo by Aldara Zarraoa/Getty Images).

On 10th October 2022, Carlos Lesmes, the head of the 20-member National Council for the Judiciary (CGPJ), the judicial body responsible for appointing judges and ensuring judicial independence, resigned in protest over a nearly four-year-long political deadlock that has paralysed appointments to CGPJ. In a statement announcing his intention to resign, Lesmes said he had “lost all hope of change” and that staying in his position “would only mean my complicity with a situation that I abhor, and which is unacceptable”. In his view, the ongoing situation “seriously compromises the credibility and functioning of the entire judiciary”.

CGPJ’s mandate expired in December 2018. Since then, it operates on an interim basis as the government and the right-wing opposition Popular Party (PP) could not agree on its makeup. The council consists of the president of the Supreme Court, 12 judges or magistrates, and eight lawyers or other prestigious jurists. In order to appoint a member, a qualified majority of three-fifths in parliament (congress and senate) is necessary.

After the resignation of Lesmes, Prime Minister Pedro Sánchez and Alberto Núñez Feijóo, the leader of PP, resumed negotiations. Although apparently no progress was made, the Government and the PP are aiming to resolve the issue “as soon as possible.” Earlier, in September 2022, European Commission vice-president Věra Jourová warned that Spain must urgently renew the CGPJ. In a letter sent to Lesmes, Jourová voiced concern over the "dire situation" in which the Spanish judiciary finds itself after years of “institutional abnormality” and urged the relevant parties to unblock the deadlock in a spirit of mutual loyalty and sincere cooperation.

In early October 2022, the upper house of the Spanish parliament, the Senate, approved a landmark bill that will ban expressions of support for the former dictator Francisco Franco. The legislation had already been passed by the Congress in July 2022. The "Law on Democratic Memory" will compel the Spanish state to search for the remains of the 114,000 people still unaccounted for after the 1930s Civil War. A DNA bank will be created to help trace, identify and map out victims of the Franco regime. Convictions handed down on political, religious or sexual grounds during the dictatorship will be annulled. A special prosecutor's office will be created to investigate crimes against humanity during the Franco era. Organisations that glorify the policies and leaders of the Franco regime will be banned. The Franco regime was an authoritarian religious dictatorship that lasted until 1977. According to the government, the legislation will “encourage a shared discussion based on the defence of peace, on pluralism and on broadening human rights and constitutional freedoms”. The leading opposition party, PP, however, understands the legislation as an attempt to revive the wounds of the past and is committed to repealing it if elected in 2023.

Despite expectations and promises, the Spanish government has not moved forward with the reform of the so-called Gag Law, which allows authorities to sanction and muzzle dissent.

In this period, a number of peaceful protests took place, for example:

On5th October 2022, the International Press Institute (IPI), Article 19 Europe and the Plataforma por La Libertad de Información (PLI) published their recommendations on how to investigate online harassment against women journalists. According to the watchdog organisations, women journalists regularly face a lack of support with their cases, are advised to limit their social media presence or to get used to attacks. According to their understanding, authorities, social media companies, media outlets and journalistic associations all have a responsibility in ameliorating the situation.

According to the European Court of Human Rights (ECHR), Spain violated the right to free speech of former Basque independence politician Tasio Erkizia Almandoz. Almandoz gave a speech honoring a former member of the dissolved separatist organisation ETA in 2008. In 2011, a Spanish court ruled that his speech “was part of a clear framework of support for specific terrorist actions”, sentenced him to one year in prison and banned him from standing in elections for seven years. According to ECHR, however, Almandoz “did not intend, either in the content of his remarks or in the manner in which they were formulated, to incite the use of violence or to justify or praise terrorism.” Spain has been ordered to pay Almandoz 6,000 Euros for non-pecuniary damage and 5,000 Euros for costs and expenses.

On 7th October 2022, Spanish prosecutors launched a criminal hate crime investigation against male students of the Complutense University of Madrid (UCM) who yelled misogynist threats from their all-male dormitory at a neighbouring all-female dormitory in a coordinated event. The event was caught on a video which later went viral. In the footage, a man is seen shouting from a window of the male dorm: “Whores, come out of your holes like rabbits, you are f***king nymphomaniacs.” Spain’s largest student union announced that it would stage a protest against the “disgusting and sexist" footage.

Civil society has raised concerns over the Law on Classified information (so-called secrecy law), which in a much-welcomed move has been proposed to replace the 1968 Franco-era law still in force. CSOs raised concerns over the short time frame for public consultations, only eight working days, which limited participation. They have called for an extension. In addition, they raised concerns about the content of the law, which is meant to establish criteria, categories and deadlines for classifying and declassifying state secret information. Amnesty International Spain raised concerns that a human rights framing is absent from the text and called on information on human rights violations to be declassified. Another concern is the prolonged period for declassification of information and proposed fines, ranging from €50,000 to €3 million for disseminating classified documents, which could adversely impact the media and investigative journalists.