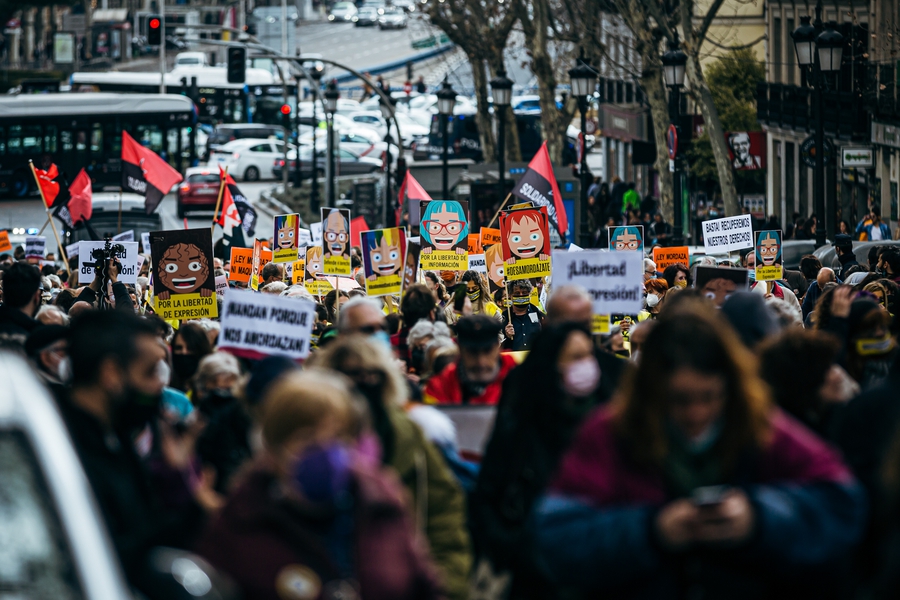 Protest against the 'Gag Law' (Photo by Alba Vigaray/VIEWpress via Getty Images).

Repeated calls to reform the so called ‘Gag Law’

On 30th May 2022, a group of NGOs condemned the Spanish government for its supposed reforms to Spain’s infamous ‘Gag Law’ which have been stalled. This announcement comes after months of expectation that the government would finally make changes to the law that has been used to fine several thousand people and imprison dozens since 2015. When the reform plans were announced in 2021, thousands of police officers and right-wing supporters protested in the streets against reforming the law. The Spanish left, alongside more than 100 civil society organisations, believe that the proposed reforms would still fall short of international human rights standards. The reformed version does not address various important issues such as migrants, refugees, racial profiling by police and full support of the right to freedom of information.

NGO groups, consisting of large organisations such as No Somos Delito, Amnesty International and Greenpeace, have renewed their calls on the Spanish Parliament to revise the legislation. The group’s demands are in line with a letter which the Council of Europe Commissioner for Human Rights, Dunja Mijatović sent to the Spanish Government.

Spain shld ensure that the review of the 2015 Law on Citizens' Safety results in better protecting #HumanRights esp. #freedomofexpression & #freedomofassembly, the right to seek asylum & prohibition of refoulement. Read my letter to @Congreso_Es @Senadoesp https://t.co/Ii9XndTu5D

The major areas of concern with the Gag Law include:

On 3rd May 2022, nearly 30 organisations, including Rights International Spain, rejected the use of Pegasus software in Spain afterconfirmation that journalists, lawyers, over 60 Catalan separatist figures and Spanish politicians, among them the prime minister and the defence minister, have been spied on. The NGO coalition has demanded an investigation and the guarantee of civil rights relating to privacy and freedom of information. The group has also requested that Law 11/2002, the law regulating the National Intelligence Centre, be revised to allow for improved clarity, accessibility and protection of civil rights.

Defence Minister Margarita Robles, who herself was subjected to surveillance, asserted that Spain’s intelligence agency has always followed the law and has used surveillance on 18 Catalan separatists with full court approval. Following the scandal, the head of the intelligence agency, Paz Esteban, was dismissed. Critics have said that she was used as a scapegoat to please certain parties to retain support for the current left-wing government that faces elections in 2023.

On 7th June 2022, Xavier Antich, the president of Òmnium Cultural, a Catalan NGO, stated that “The Spanish government’s reaction to [the Catalan] scandal is incompatible with the rule of law”. Antich added that Madrid has been silent and assumed no responsibility towards the victims, which “violates international commitments.” He believes that the espionage is part of Madrid’s repression of Catalan dissent against Spain.

“an exhaustive, independent and effective investigation into the cases of surveillance of Catalan and Basque figures, including the opening of a commission whose findings are made available to the ad hoc Commission of the European Parliament on infringements of European Union law and fundamental rights associated with the use of Pegasus.”

On 13th June 2022, photojournalist Javier Bauluz was fined €960 for “disrespecting an agent” and “refusing to identify himself” under Article 36.6 and Article 37.4 of the “Gag Law”. In November 2020, the Pulitzer prize-winning photojournalist had been documenting the arrival of migrants and refugees at the port in Arguineguín on the island Gran Canaria. He was trying to capture the dire living conditions that people were forced to deal with. One morning, Balauz was taking pictures of a rescue ship arriving in the port. Video footage appears to show police grabbing him by the arm and insisting that he leave the site. When Bauluz protests, one police officer threatens to fine him. According to the International Press Institute, Bauluz rejected the fines. Under Spanish law, there is no option to appeal the sanctions. It said that until the Gag Law is reformed, “press freedom in Spain will continue to suffer”.

On 17th May 2022, the Spanish government passed a draft abortion law that would allow individuals from the age of 16 to have abortions without parental permission. Additionally, the legislation will also make Spain the only country that allows menstrual leave for women who suffer from painful periods. The draft still awaits approval from Parliament to replace the current abortion legislation that requires parental permission for abortions until age 17. The law also provides for free birth control pills, previously priced at about 20 euros.