'Gag Law' under reconsideration, legal and online harassment of journalists 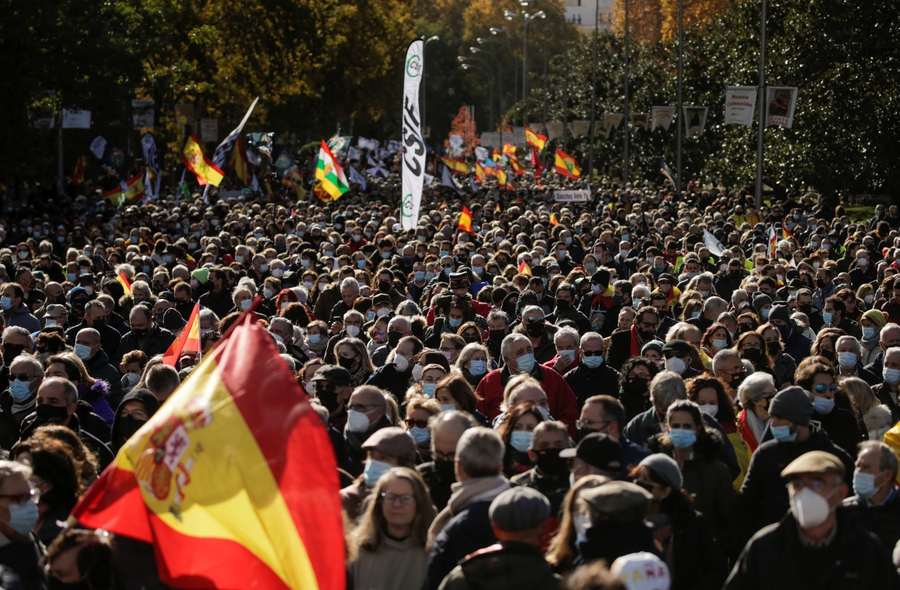 By the end of January 2022, the sixth coronavirus wave in Spain began to fall. Although the hospitalisation rate was lower than in the previous waves, the pressure on the Spanish healthcare system is significant, with 24 per cent of available ICU beds occupied by coronavirus patients on 24th January 2022.

On 15th February 2022, the Congress resumed its meetings to discuss Spain’s controversial Citizens’ Security Law. Originally passed in 2015 under the government of Mariano Rajoy, the so-called "gag law" has been criticised by UN experts, journalists, and human rights groups for unjustifiably restricting freedom of assembly. While the Spanish Socialist Workers' Party (PSOE) had been promising to repeal the act since coming to power in 2018, the coalition government finally announced plans for reform in November 2021. Ione Belarra, leader of Spain’s junior coalition party Podemos, called the law the "greatest blow to civil and political liberties" since the country's return to democracy. As it stands now, the reform would eliminate or modify some of the most contentious parts of the Citizens' Security Law, including the imposition of fines of up to 600 Euros for organising spontaneous demonstrations and the requirement for citizens to obtain permission before taking and publishing images or videos of the police.

Shortly after the announcement of reform, tens of thousands of police officers and their supporters, which include right-wing parties such as People's Party (PP), Vox and Cuidadanos, took to the streets. Members of the police oppose the reform because, they claim, it will impede their ability to effectively handle violent criminals. Even though the provision in the current law which prohibits the unauthorised recording of police was deemed unconstitutiona lby Spain's Constitutional Court last year, police officers maintain that it is necessary for their protection. Moreover, the provision is still used by the authorities to fine journalists and media organisations, as was the case in January 2022 when photojournalist Mireia Comas was fined 601 Euros and was ordered to delete a photo she had taken of a police checkpoint near Barcelona.

Civil society organisations believe that the reform does not go far enough. Under the platform No Somos Delito, a broad coalition of more than 100 associations and social movements claim that the most harmful elements of the Citizens' Security Law remain unchanged. Most notably, the reform does not address the issue of pushbacks of migrants and refugees in Spain. Moreover, it does not prohibit racial profiling practices by the police, nor does it challenge the presumption of veracity for police officers, which enables them to act with relative impunity. The draft reform also falls short of taking a stance on the right to freedom of information. While the provision has been modified somewhat, the act of taking pictures or videos of police officers at work will still be sanctioned in cases where "it entails a certain danger", which is left up to the police to decide.

"It is good news that the process to reform the 'Gag Law' has been reactivated. However, the amendments proposed by the majority of the parliamentary groups do not tackle some of the most restrictive aspects: for instance, the very wide concept of 'organiser' of a demonstration and the responsibilities attached to it or the sanctions for unlawfully using images of police agents while on duty, which should be eliminated from the law,” said the director of Rights International Spain, Patricia Goicoechea.

In a letter published on 11th February 2022, Council of Europe Commissioner for Human Rights, Dunja Milatovic also expressed dissatisfaction with the proposed reform and called on the Parliament of Spain

“to ensure that the review of the 2015 Law on Citizens’ Safety is used as an opportunity to bring it fully in line with European and international human rights standards, in particular as concerns the provisions impinging on the rights to freedom of expression and to peaceful assembly, the right to seek asylum and the prohibition of refoulement.”

In the past, meetings to reform the Citizens’ Security Law had been postponed due to COVID-19. While Congress resumed discussions in February 2022, it is unlikely that the new text will be approved before the spring, as was originally the plan. The coalition government must walk a fine line in the coming weeks as the reform is met with fury from the right, while the left considers it to be insufficient. The Republican Left of Catalonia (ERC), potentially the biggest executive backer of these reforms, is negotiating with the government to enforce greater control over police practices. Among other things, they advocate for the prohibition of using rubber bullets and stronger penalties in cases of professional misconduct. Meanwhile, minority parties threaten to withdraw their support if the government fails to put an end to “arbitrary identifications” by police officers, which can lead to racial profiling, and expulsions at the border. Regarding the latter, the government says it plans to address the pushbacks in a future reform on immigration. Still, the junior coalition party Podemos seems more open to working with the progressive wing of the legislature on these issues, especially seeing as the far-right parties PP, Vox and Cuidadanos will undoubtedly vote against the reform.

Over the past few months, Mapping Media Freedom has recorded several instances of legal and online harassment towards Spanish journalists: