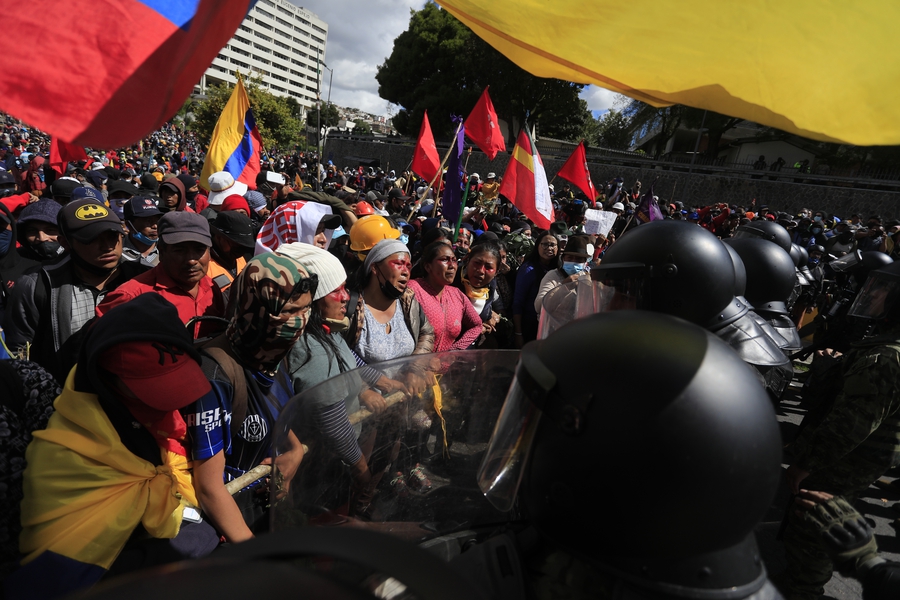 Tens of thousands of protesters have taken to the streets in Ecuador since 13th June 2022, when the Confederación de Nacionalidades Indígenas de Ecuador (Confederation of Indigenous Nationalities of Ecuador – CONAIE) and other Indigenous organisations convened a national strike against the government’s economic and social policies. The organisations, joined by trade unions, campesino and social organisations, demanded, among other things, respect for the rights of Indigenous communities, stronger labour rights, fair prices on farm produce and a cap on increasing prices for fuel and other basic commodities. On the first days of the strike, protesters blocked roadways in at least seven provinces.

Authorities responded to the protests with stigmatisation and criminalisation of Indigenous organisations and leaders. On 14th June 2022, the Ecuadorian National Police in the Andean province of Cotopaxi arrested Indigenous rights defender and CONAIE president Leonidas Iza Salazar in the early hours of the morning and held him incommunicado for 24 hours. He was accused by the authorities of “paralysing public services” but was eventually conditionally released on a court order, but will still faces charges.

After the arrest, news outlets reported clashes between police and protesters, with several people wounded by the impact of tear gas cannisters. Throughout the protests, there have been several similar reports of security forces arbitrarily arresting demonstrators and using excessive force, including by shooting less-lethal weapons directly at protesters’ bodies. In Riobamba between 17th and 18th June, for instance, demonstrators reported being wounded by pellets and receiving injuries between the skull and eyes. There were also reports of vandalism and violent confrontations, with cases of police officers injured or held by protesters.

On 17th June 2022, President Lasso issued Executive Decree No. 455 which declared “a state of emergency due to serious internal commotion” in the provinces of Cotopaxi, Pichincha and Imbabura, suspending freedom of association, assembly and transit for thirty days. The first version of the decree authorised the use of lethal force and restrictions on the right of access to information, but was quickly replaced with a different version without these provisions. The state of emergency was later extended to Chimborazo, Tungurahua and Pastaza. Nevertheless, protesters defied the state of emergency and protests spread to almost all 24 of the country’s provinces.

On 18th June 2022, CONAIE reported that unidentified individuals had shot at the window of Leonidas Iza’s vehicle while it was empty. A day later, the organisation said their headquarters in Quito were under surveillance and besieged by military vehicles.

Monitoring by civil society coalition Alianza por los Derechos Humanos Ecuador (Alliance for Human Rights Ecuador – Alianza DDHH) showed that at least 200 people had been injured and 145 detained in the protests by 25th June 2022. Five protesters were killed, including a Kichwa Indigenous protester who was killed by the impact of a tear gas cannister to the head in Puyo on 21st June 2022.

According to the Inter-American Commission on Human Rights, by 24th June 2022 civil society groups had documented at least 86 serious acts of violence against the press covering the National Strike. The reports include physical attacks – such as the use of whips and spears, and hot liquids thrown at journalists – threats, harassment, illegal seizure of equipment and attacks with tear gas bombs. In addition, some newspapers and organisations reported attacks on their websites.

On 16th May 2022, a peaceful sit-in by medical students at the University of Guayaquil was repressed by police using excessive force. The students’ protest was prompted by the lack of classroom and professors assigned to their course on the first day of classes. According to newspaper El Universo, journalists were covering the protest but as soon as media crews left, police began to disrupt the demonstration. Officers seized protest signs from the students and used tear gas to disperse them. Videos recorded by students showed police officers shoving and beating some of the demonstrators with sticks. Civil society group Comité de Protección de Derechos Humanos de Guayaquil (Human Rights Protection Committee of Guayaquil) denounced the disproportionate use of force by security forces, and said that several students were injured. One student leader was detained.

At the end of March 2022, Amnesty International published their annual report on the State of the World’s Human Rights. The organisation’s chapter on Ecuador notes the lack of protection policies for human rights defenders at risk. The report also highlights the case of defenders criminalised for denouncing lack of due process in the legal case of Indigenous Kichwa peoples affected by an oil spill in 2020. Regarding the freedom of peaceful assembly, Amnesty International stated that by the end of 2021 no one had been held accountable for the use of excessive force during 2019 mass protests.

In 2021, the group registered 35 alerts for violations of the right to access to information. 19 cases accounted for refusal, partial or incomplete delivery or omission by public bodies, and 16 cases for obstruction of journalistic work. For instance, the Health Ministry limited access to public health data during the COVID-19 pandemic and the Comptroller General’s Office denied journalists access to information on civil servants’ patrimony. On a positive note, civil society presented a bill proposing improvements to the current Organic Law on Access to Public Information.

Ecuador was ranked 68th out of 180 countries in Reporters Without Borders’ 2022 World Press Freedom Index. The organisation noted that journalists in Ecuador are working in a climate of growing danger, with the press under constant attack, largely by government agents. These attacks often take place during demonstrations. However, it said that tensions between privately-owned media and the government were eased during the Lenín Moreno (2017-2021) and Guillermo Lasso (2021-present) governments.