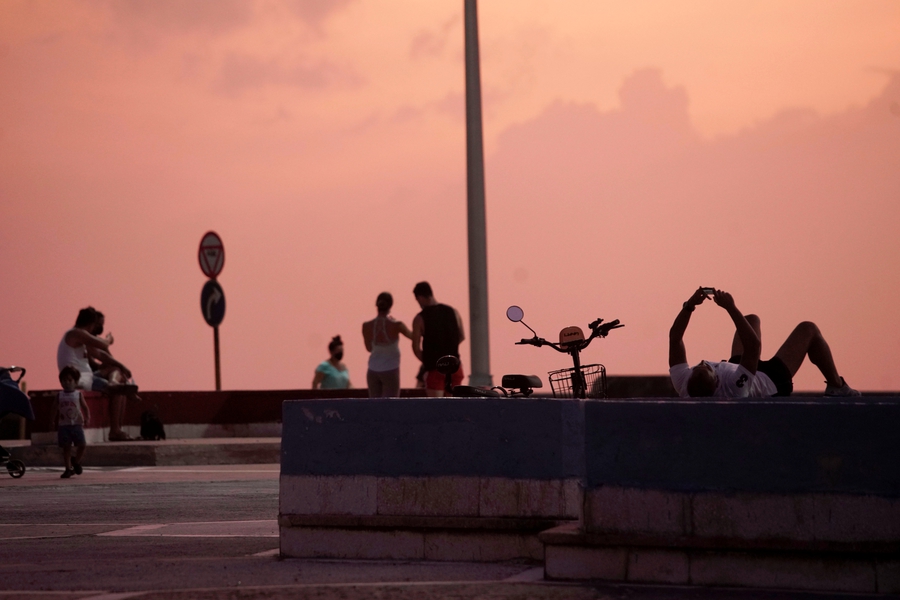 People connect to the internet at a public hotspot in Havana, Cuba, 18 August 2021. (Photo by REUTERS/Alexandre Meneghini.)

On 18th August 2021, 21 Cuban and international civil society organisations reiterated their concern over increased repression in the country one month after the anti-government demonstrations of 11th July 2021 (11J). Cubalex registered 837 detentions, about half of which took place on the day of the protest and the following day, with 33 of those detained being minors. At least 44 people were released under conditions such as house arrest while investigations are ongoing, and others were released with fines for “spreading an epidemic”. Ten people remain missing.

Civil society also stated that independent activists have been under constant siege by the authorities since the 11J protests. They said that the country’s civil society has seen increased police repression and intimidation through militarisation in the streets.

"We’ve named six people prisoners of conscience in #Cuba – in a symbolic gesture to the many hundreds more who likely deserve the designation – and call for their immediate and unconditional release" said @ErikaGuevaraR https://t.co/yI7thfmQFw

In the weeks following 11J protests, several prominent activists in Cuba faced rearrest, including artist and leader of the Movimiento San Isidro Luis Manuel Otero Alcántara, and activist and leader of the Unión Patriótica de Cuba (Patriotic Union of Cuba - UNPACU) José Daniel Ferrer García. Cuban authorities revoked Ferrer’s right to home detention, ordering him to serve the remaining four years of a sentence for assault in prison. As reported by the CIVICUS Monitor at the time, UNPACU and other civil society organisations say these charges against Ferrer were fabricated and politically motivated.

On 19th August 2021, Amnesty International named six defenders detained in Cuba as “prisoners of conscience”. The organisation gives this designation to people imprisoned because of their political, religious or other beliefs who have not used or advocated violence. In a statement, Amnesty said the six defenders were named as a symbolic gesture, given that many more detainees in Cuba would likely deserve the designation. The group includes Luis Manuel Otero Alcántara, José Daniel Ferrer García, independent journalist Esteban Rodríguez, human rights defender Thais Mailén Franco Benítez, artist Hamlet Lavastida and musician Maykel Castillo Pérez, known as El Osorbo.

Amnesty International also said the crackdown on rights defenders following protests has included police surveillance of activists and journalists, denial or interruption of internet services, and violations of due process and ill-treatment of those detained in connection with the protests.

In August 2021, influencer Ariel González Falcón, known as “Yo Uso Mi Nasobuco”, faced police harassment after sharing messages on social media using the hashtag #SOSCUBA. The communicator was temporarily detained twice within a month after participating in 11J protests. Following a detention on 4th August 2021, he published a video saying he would remove all content from his social media pages using this hashtag. In a similar case, on 5th August 2021 sports journalist and YouTuber Daguito Valdés said he was summoned by the Ministry of Interior and questioned for his social media publications related to the “country’s current situation”.

On 17th August 2021, Cuba’s official diary Gaceta Oficial published the Decree-Law 35/2021 on Telecommunications, Information and Communication Technologies, and the Use of the Radio Spectrum. As previously reported on the CIVICUS Monitor, authorities had announced the approval of the legislation in April 2021 but had not made the text of the law public. In the same issue of the official diary, decrees and resolutions which complement Decree 35 were published with further provisions on cybersecurity and internet services.

Article 15 of Decree 35 establishes duties of users of ICT and telecommunications, including the requirement that they not use the services to carry out actions or transmit information that affect “personal integrity and honour” and “public morality and the respect for public order”. An additional decree obliges internet providers to suspend the service or terminate the contract of any users failing to abide by this legislation. According to an analysis by the Committee to Protect Journalists (CPJ), Article 69 of Decree 35 also empowers the state telecom monopoly ETECSA to shut down networks and services that transmit information that is false; offensive or harmful to human dignity; against personal and family privacy; against collective safety, general welfare, public morality, or respect for public order; or which constitutes “a means to commit illicit acts.”

CPJ also said the new resolutions list online offences including the “dissemination of false news” and “defamation with an impact on the country’s prestige,” as well as “harmful diffusion,” defined as the dissemination of content that “incites demonstrations or other acts that can affect public order.” Terms such as “false information” are left undefined. This allows the criminalisation of online content, the organisation asserted.

“With these rules, the Cuban regime is legalising internet blackouts, and the possibility of cutting off access to the internet and mobile phone services in a personalised way.”

The Special Rapporteur on Freedom of Expression of the Inter-American Commission on Human Rights also expressed concern about the legislation package, saying it contains provisions that contradict Inter-American standards.The office of the Special Rapporteur said Resolution 105 criminalises new “cybersecurity incidents” such as cyberterrorism, understood as actions aimed at subverting the constitutional order, suppressing or seriously destabilising the functioning of political and mass institutions. In this regard, the Special Rapporteur remarked that regulations should protect the open, plural and decentralised nature of the internet, as well as promote the sharing of ideas and information of all kinds.