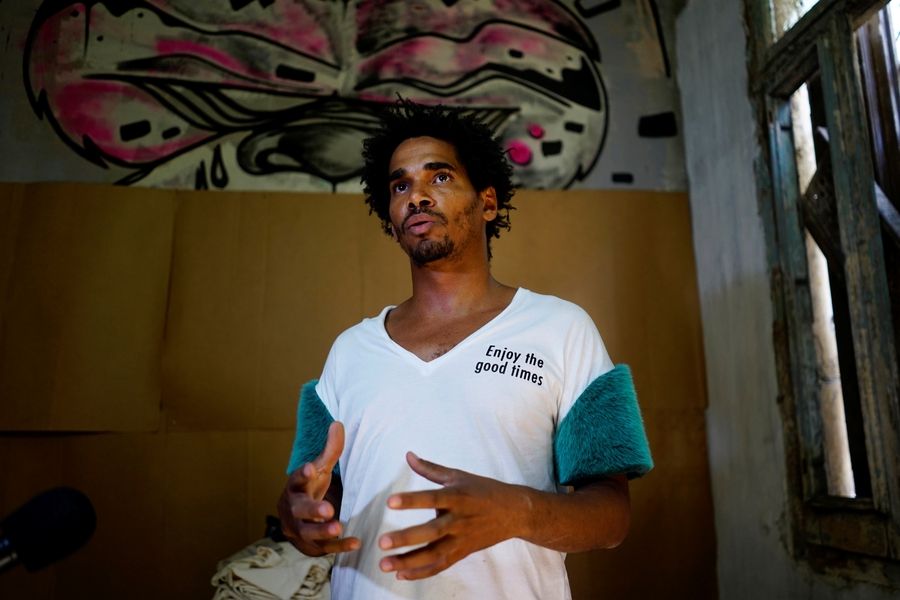 Luis Manuel Otero Alcantara speaks during an interview at his home in Havana, 2 May 2018. REUTERS/Alexandre Meneghini.

At the end of April 2021, artist and human rights defender Luis Manuel Otero Alcántara started a hunger strike in protest against continued harassment against him and members of Movimiento San Isidro (MSI). He also demanded respect for freedom of expression and artistic freedom, after government agents destroyed some of his work. On 30th April 2021, police officers detained 13 demonstrators who had gathered in La Habana in support of the artist. According to news reports, the demonstration was peaceful with protesters demanding to see Otero Alcántara and shouting the slogan “Patria y Vida”, associated with dissidents against Cuba’s regime. At least eight people remained under detention several days after the protest - including journalists Mary Karla Ares and Esteban Rodríguez.

Civil society organisations said Otero Alcántara’s home was surrounded by police and state security, and several members and allies of MSI also reportedly faced harassment and short-term detention. On 2nd May 2021, Cuban authorities forced entry into the artist’s home to transfer him to a hospital. Official media attempted to play down the hunger strike, claiming the activist’s “physical examination showed no signs of malnutrition”.

However, as of 14th May 2021, government authorities still maintained him at the hospital without visits or communication with family and friends. In a press release, Movimiento San Isidro demanded access to Luis Manuel and denounced the repression faced by activists in recent weeks.

New legislation on information and communications technologies sparked concern among civil society in April 2021. On 15th April 2021, the government announced the approval of a “Decree-Law on Telecommunications, Information and Communication Technologies, and the Use of the Radio Spectrum”. According to an article on the National Assembly’s website, the legislation established a regulatory framework with the goal of ensuring greater sovereignty over these technologies. The full text of the law was not made public – generating concern among civil society over its contents. Independent journalist and former prisoner of conscience Roberto de Jesús Quiñones expressed worries that the legislation would be used to restrict the use of the internet and silence dissent.

On 8th April 2021, civil society organisation Instituto Cubano por la Libertad de Expresión y Prensa (Cuban Institute for Freedom of Expression and the Press - ICLEP) said government supporters had incited an attack on the children of journalists Martha Liset Sánchez and Alberto Corzo. A member of a government-allied organisation encouraged their nephew, also a child, to physically assault the journalists’ two sons because their parents were “counter-revolutionaries”. One of the children, a 10-year-old, was injured on the shoulder and neck as a result of the assault. Corzo is ICLEP’s executive director and Liset Sánchez is director of community media Cocodrilo Callejero, also a member of ICLEP. They said authorities refused to open a complaint regarding the attack.

On 22nd April 2021, the Inter American Commission on Human Rights (IACHR) granted precautionary protection measures to independent journalist Yoel Suárez. The international organisation considered that there are urgent risks to Suárez, who has been subjected to intimidation and arrests in relation to his work as a journalist and writer. As previously reported on the CIVICUS Monitor, he denounced threats of reprisal by security agents if he did not stop his reporting.

On 9th April 2021, several activists and dissidents denounced facing police harassment, with patrols besieging their homes and prohibiting them from going out. Among those affected were artist Camila Lobón, journalist Iliana Hernández, activists Raux Denis Rodríguez and Oscar Casanella, and the writer Amaury Pacheco. As reported by digital media Ciber Cuba, none of the activists knew the motivation for the increased harassment on the day.

Amnesty International said that in March and April 2021, over 30 activists reported being under surveillance by police and state security agents. After the protest on 30th April 2021, at least 15 people were under strict surveillance.