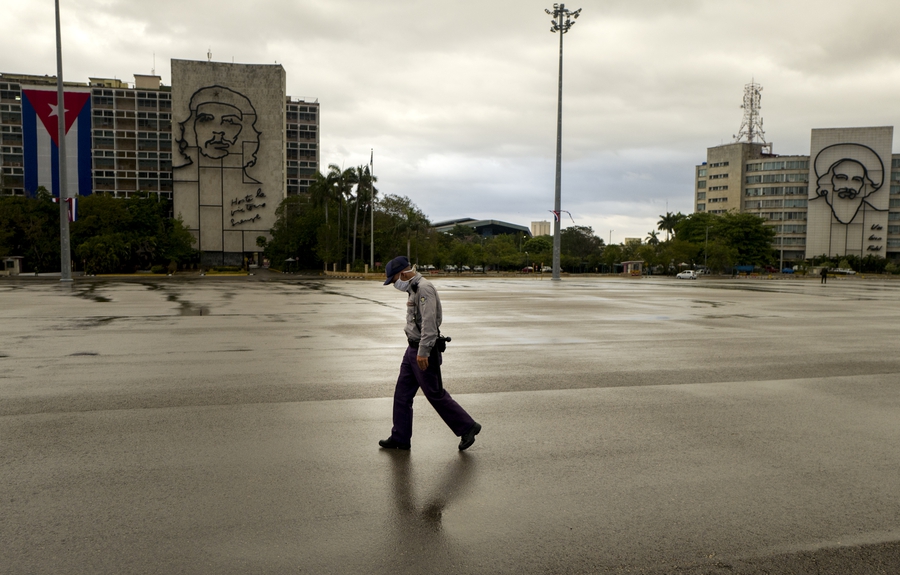 A police officer wearing a face mask to prevent the spread of covid-19. Havana, 1 May 2020. Eliana Aponte/Getty Images.

Cuban news media, social movements and human rights organisations have denounced that the government has continued to crackdown on dissent, repress freedoms and silence critical voices during the COVID-19 pandemic. Since March 2020, there have been several reports of activists and journalists being detained or harassed, particularly through police citations, summons and interrogations. At least 30 people have been subjected to harassment from state actors under Decree 370, which has been used to supress freedom of expression in the country.

A group of 47 local and international civil society organisations published a joint statement on 6th May 2020 to urge the international community to act in pressing the Cuban government to cease the violation of fundamental human rights caused by this legislation.

On 16th May 2020, Onelvis Flores Hecheverría, an activist with the Unión Patriótica de Cuba (Patriotic Union of Cuba - UNPACU), was detained in Matanzas on charges of alleged “disobedience” and “contempt of authority”. As reported by UNPACU, the defender was detained to prevent his participation in civic activities organised around a commemorative date. For at least seven days his family were unable to contact him in prison. According to digital media Cubanet, by 27th May 2020 Hecheverría had been released to await trial at home.

On 22nd May 2020, Adrián Curuneaux Stevenec was detained on charges of “attack”, after being summoned to report to the police station in the Playa municipality near Havana. Stevenec is a member of Opositores Por Una Nueva República (Opponents For a New Republic) and, according to a member of the same group, he had previously had an altercation with a police officer who told him to stop “counterrevolutionary activities” and threatened him.

At the end of May 2020, family and friends of political prisoner Luis Enrique Santos Caballero denounced that the defender has been subjected to ill-treatment in prison. Caballero was detained and convicted in December 2019 for protesting to demand the freedom of UNPACU leader José Daniel Ferrer. According to news outlets, the defender has only one kidney and has been denied appropriate medical attention for the pain he has suffered in prison. He was also reportedly put in a punishment cell for demanding better conditions for prisoners.

On 3rd April 2020, José Daniel Ferrer and the other three UNPACU defenders were released from the Aguadores prison in Santiago de Cuba and placed under house arrest. As previously reported on the Monitor, the defenders were accused of assault and detained in October 2019. Ferrer, his family and the other defenders claim these are fabricated charges. A closed-door trial took place on 26th February 2020 and the four were found guilty of “injuries” and “privation of liberty” and given different sentences. Human rights organisations have called this an unfair trial and called for the sentences to be overturned. Erika Guevara-Rosas, Americas director at Amnesty International, said:

“Although it’s good news that José Daniel Ferrer García can finally go home, instead of remaining in prison, where he would be at greater risk of COVID-19, his conviction and sentencing is still shameful. He should have never been detained for peacefully expressing his ideas in the first place.”

On 1st June 2020, Emilio Almaguer de la Cruz, a member of UNPACU and an independent journalist in Baracoa, Guantánamo, was arrested for defamation. Days before, on 27th May 2020, Almaguer de la Cruz had published a video denouncing being subjected to harassment and reprisals from local authorities after his Facebook post about an alleged investigation of corruption involving a local superintendent. The journalist was detained after the same public official accused him of defamation. On 6th June 2020, the defender said on Twitter that he was held in a police station for 72 hours and then transferred to a hospital to be treated for a lung infection.

On 2nd May 2020, on International Press Freedom Day, three international NGOs - Amnesty International, the Committee to Protect Journalists (CPJ) and Article 19 - published an open letter urging the Cuban government to immediately release journalist Roberto Quiñones Haces. The reporter was detained in September 2019, convicted for “resistance” and “disobedience”, and has been declared a prisoner of conscience by Amnesty International. The three organisations stated that Roberto Quiñones’ situation appears particularly dire in light of the COVID-19 pandemic as he has suffered from escalating health problems while serving his sentence. The journalist has also said his conditions in prison include overcrowding, poor food and water quality and lack of adequate medical attention. Quiñones also reportedly suffered retaliation for publishing this information.

In a separate development, journalist Yoe Suárez has reported repeated instances of harassment and intimidation from public authorities. On 22nd April 2020, the reporter said on his Twitter account that two police officers visited his home without a citation saying they wanted to speak to him. The officers took him to a nearby office and threatened to fine him on the basis of Decree 370 for sharing false news and producing “enemy propaganda”. Suárez had been previously summoned to present himself to the police for questioning on 27th March 2020, and had also denounced that his mother had also received citations and been subjected to harassment.

A LGBTI+ community page on Facebook called “Dame la mano” was hacked on 11th May 2020, when a virtual event would have been held to honour a commemorative date for the community in Cuba. At least two activists who would have taken part in the event also said that their internet and data services were unavailable for several hours on the day of the event. As previously reported on the Monitor, in 2019 an independent march organised by the LGBTI+ community around the same date was met with repression from authorities.

In a statement, 47 civil society organisations and media outlets denounced the increased persecution against independent journalists and civil society actors in Cuba, which has increased during the health crisis resulting from the coronavirus pandemic. In the statement, the organisations said this wave of repression was intensified by the application of Legal Decree 370 “On the computerisation of Cuban society,” in force since 4th July 2019. The law regulates internet use in Cuba and sanctions, among other things, the dissemination of information “contrary to social interest, morals and good manners”.

Under this law, at least 30 people have been subjected to interrogation, threats and seizure of work equipment for broadcasting their opinions on social media, 20 have been victims of 3,000-peso fines (120 US dollars), an amount triple the average monthly salary. Failure to pay these fines constitutes a crime punishable by six months in prison, a systematic approach that enabled the Cuban State to sentence at least seven civil society actors. The statement also highlighted arbitrary citations and detentions occurring during the pandemic, as they also contradict the recommendations of the World Health Organization to promote social distancing.