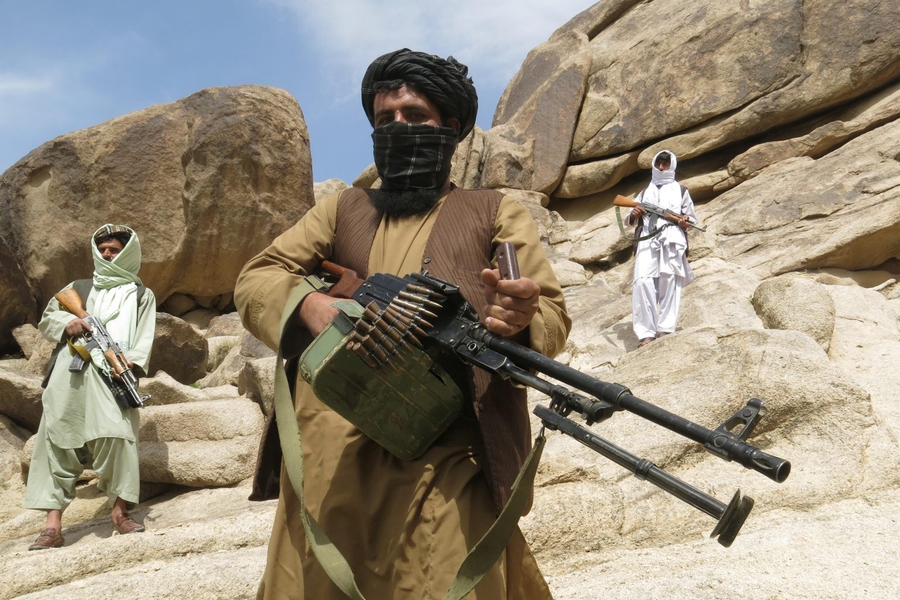 The Taliban has escalated its nationwide offensive in Afghanistan following the withdrawal of US-led foreign forces. In recent weeks the fundamentalist Islamist group said it had captured more than half of all Afghanistan’s territory, including border crossings with Iran and Pakistan.

On 1st August 2021, it was reported that the armed group had renewed assaults on three major cities and attacked a major airport in the south with rockets. The current focus of the Taliban’s efforts appears to be a number of key provincial capitals - Herat, Lashkar Gah and Kandahar - in south and west Afghanistan, as Taliban militants seek to seize them from government forces.

Meanwhile, new UN data released on 26th July 2021 revealed a surge in civilian casualties. More women and children were killed and wounded in Afghanistan in the first half of this year than in the first six months of any year since records began in 2009, according to the report. The UN Assistance Mission in Afghanistan (UNAMA) expressed particular concern over an acute rise in the number of civilian casualties – with as many killed in May and June 2021 as in the preceding four months.

In recent months, attacks on journalists have persisted while the Taliban disrupts media outlets in northern provinces. There have also been attempts by Afghan officials to suppress critical reporting of the conflict. Human rights defenders and activists remain at risk, while the authorities have been hampering the work of NGOs.

Journalists have been paying a high price in Afghanistan ever since the United States and its allies invaded and toppled the Taliban government in 2001.

According to Reporters Without Borders (RSF) at least 100 journalists, including 15 international journalists, have been killed in connection with their work in the past 20 years, while more than 60 media outlets have been destroyed or attacked and hundreds of threats have been made against journalists and media. Afghanistan is ranked 122nd out of 180 countries in RSF's 2021 World Press Freedom Index.

In recent months, journalists have continued to face attacks. In May 2021, Nemat Rawan, a former Afghan television journalist, was shot dead in southern Kandahar. Rawan hosted a popular talk show on the country’s leading broadcaster, Tolo News. There was no claim of responsibility for the attack, but the Taliban have been blamed for a wave of assassinations targeting journalists in recent months.

Afghan authorities should launch a thorough and credible investigation into the killing of journalist Mina Khairi, determine if she was targeted for her work, and bring those responsible to justice.https://t.co/hq5Qu16HBe

Mina Khairi, a young Afghan journalist and TV anchor, was killed in Kabul in June 2021. She died with her mother and two more passengers when a car bomb planted under a van exploded. Mina Khairi, 23, was an anchor at Ariana News TV. The Committee to Protect Journalists (CPJ) said that Khairi had worked at the privately-owned TV station since 2017 as a general news and political affairs show host.

AJSC is saddened about the death of a former journalist, Hafizullah Haqparast. Mr. Haqparast was killed in a clash between Afghan security forces & the Taliban while farming in the Pul-e-Alam, center of Logar. We express our condolences to his family & the media community. pic.twitter.com/ynyulUywA1

Journalist Hafizullah Haqparast was shot dead in Logar province on 9th June 2021 as a result of clashes between the Taliban militants and Afghan forces. Family members of the victim claim Hafizullah Haqparast was gunned down by the Afghanistan National Army forces while he was working in the city of Pul-e-Alam in Logar province. The government promised to investigate the incident, but the results of the investigation have yet to shared with the family of the deceased.

Reuters journalist Danish Siddiqui was killed on 16th July 2021 in Spin Boldak, Afghanistan while covering a clash between Afghan security forces and Taliban fighters. Danish Siddiqui had been a Reuters photographer since 2010. According to Reuters, Siddiqui had this week been embedded with Afghan special forces based in the southern province of Kandahar and had been reporting on fighting between Afghan commandos and Taliban fighters.

The International Federation of Journalists (IFJ) reported that the Taliban has been controlling and disrupting media outlets since tensions escalated on 7th June when the Taliban launched the first assault on Qala-e-Naw, targeting government forces.

AIJA reported to the IFJ that most journalists left the city during the attack, and Taliban spokesman Zabihullah Mujahid sent an audio message to the media saying media and journalists would not be harmed. The Taliban also said journalists were useful and instructed them to behave and cooperate if confronted.

Journalists arrested for their reporting on the conflict

#Afghanistan: Authorities must immediately release journalists Bismillah Watandoost, Qudrat Soltani, Moheb Obaidi, and Sanaullah Siam, drop their investigation into their work, and allow members of the press to report freely.https://t.co/3OLl8ThNpU

On 26th July 2021, four journalists were arrested by the National Directorate of Security, Afghanistan’s intelligence agency, after they returned from Spin Boldak district where they had been investigating reports that the Taliban had killed civilians. The Ministry of Interior has accused the journalists of spreading enemy propaganda.

According to Human Rights Watch, there have been attempts by Afghan officials to suppress critical reporting. On 6th July, the government announced that it was unlawful to broadcast news “against the national interest.” Government officials have also ordered the arrests of journalists reporting on civilian casualties from government operations.

On 29th July 2021, the Taliban took responsibility for the killing of a comic in Afghanistan’s southern province of Kandahar. A video of two men slapping and abusing Nazar Mohammad, better known as Khasha Zwan, spread widely on social media. He was later killed, shot multiple times. Taliban spokesman Zabihullah Mujahid acknowledged that the two men were Taliban.

Mohammad was not a TV personality but would post his routines on TikTok. He was known for crude jokes, funny songs, poking fun at himself and often making fun of topics thrown at him from fans.

In May 2021, ten human rights groups including CIVICUS issued a joint statement about threats, harassment, intimidation and attacks against human rights defenders, activists, journalists and media workers in Afghanistan.

According to the groups, from September 2020 until May 2021, a total of 17 human rights defenders have been killed, including nine journalists, based on information compiled by the Afghan Human Rights Defenders’ Committee (AHRDC). During this period, over 200 human rights defenders and media representatives reported that they were receiving serious threats to the AHRDC and the Afghanistan Journalists’ Safety Committee.

The groups highlighted that the progress made on creating safe space for human rights defenders, especially women human rights defenders and journalists, is at stake with the United States and NATO forces’ announcement of full withdrawal from Afghanistan by 11th September 2021. Those working outside the capital are especially exposed to serious threats due to the lack of support available in Kabul and through some international networks and embassies. Many of these defenders have had to relocate within Afghanistan and, in some cases, even temporarily leave the country with their families for safety concerns.

Most recently, on 12th June 2021, civil society activist Mustafa Sadat, head of the youth wing of Sadat Council, was killed in a car bomb attack in Kabul after a magnetic bomb exploded under his car during a series of attacks in the city.

On 12th July 2021, a women’s rights activist was abducted by the Taliban while travelling on the Logar-Kabul highway. She was travelling with her family when the Taliban stopped her car and diverted it to their base. She was released within 24 hours after elders and community leaders intervened.

NGOs being hampered by authorities

According to civil society groups, the first Vice President has been interfering and meddling in the work of NGOs and creates hurdles instead of facilitating their work. On 4th May 2021, a group of NGOs sent a joint letter to the office of the First Vice President Amrullah Saleh and urged him to allow government departments to enter into agreements with NGOs.

In January 2021, the first Vice President issued a letter to all government ministries and entities instructing them to suspend their agreements with the NGOs on the implementation of projects as the government was working on a framework to regulate the collaboration between the government and NGOs. NGOs claimed that the suspension caused many delays in implementation of their projects, particularly welfare and humanitarian activities.

Hard-won progress of women and girls is at serious risk

Civil society groups are concerned that two decades of hard-won progress by Afghanistan’s women and girls is at serious risk of being unravelled as international troops continue to leave the country and with talks between the Afghan government and the Taliban at an impasse.

Yamini Mishra, Amnesty International’s Asia-Pacific Director said: “Afghanistan is at a tipping point. As peace talks falter, the conflict continues to take the lives of civilians on an almost daily basis. Taken alongside the forthcoming withdrawal of international troops, Afghanistan is drifting towards an outcome that threatens to undo more than twenty years of progress for women and girls”.

Under Taliban rule from 1996-2001, Afghan women were subjected to severe restrictions including being banned from working outside the home and appearing in public without a close male relative. Women and girls were further denied access to education and had limited access to healthcare. These restrictions still invariably apply to women in areas currently controlled by the Taliban. While much work remains to be done, women’s rights have improved significantly since 2001. There are now 3.3 million girls in education, and women more actively participate in the political, economic and social life of the country.

In the current peace talks, which began in September 2020, the 21-member Afghan government negotiation team included only four women, with no women represented in the Taliban delegation. In the March 2021 peace conference on Afghanistan in Moscow, only one woman was included in the 16-member government delegation.

Civil society groups have called on the Afghan authorities to investigate and bring to justice the perpetrators of a brutal series of attacks amounting to war crimes that have killed at least 24 civilians in little over a week.

On 15th June 2021, five health workers were killed and four others injured after gunmen opened fire at various polio vaccination centres across the city of Jalalabad in Nangarhar province. The incident comes shortly after two car bombs killed at least seven civilians and injured at least six others on 12th June in a district of Western Kabul largely populated by members of the persecuted Hazara minority.

The incidents follow the killing of ten mine clearers, many of whom were Hazara, working for the international humanitarian organisation The Halo Trust in Baghlan province on 8th June, in an attack that injured 16 others.

In May 2021, there was a deadly bombing attack of Sayed-ul-Shuhada High School in West Kabul which killed at least 85 people and injured at least 150. Most of them were girls aged 11 to 15. The government has blamed Taliban insurgents, but a spokesperson for the group denied involvement and condemned any attacks on Afghan civilians. The victims of a deadly bombing in Kabul were mostly young, impoverished schoolgirls from the minority Hazara community.