Concerns about crackdown on protests, press freedom and lack of accountability in the Maldives 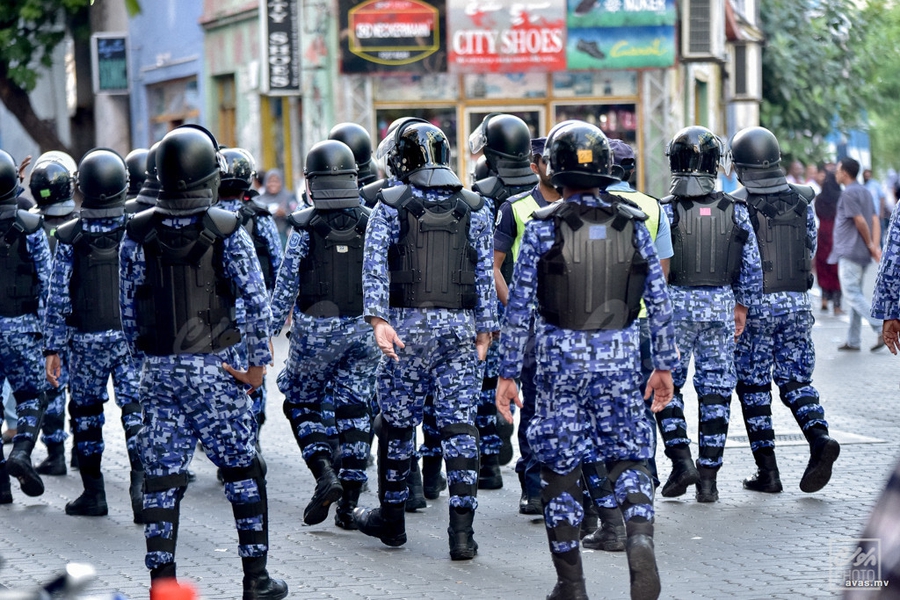 Over the last few months, a crackdown on protests has been documented, at times under the pretence of curbing the pandemic, with cases of arbitrary arrests and excessive use of force. There has been a lack of progress in bringing the perpetrators of the killing of blogger Yameen Rasheed and the disappearance of journalist Ahmed Rilwan to justice. A leading human rights group is challenging its arbitrary de-registration and has raised concerns about the Maldives President influencing the ongoing judicial process. Despite progress, there continue to be concerns about press freedom.

Crackdown on protest against sexual harassment

Police under fire for excessive use of force at Labour Day protest https://t.co/fxYgMEdNrQ pic.twitter.com/RjBfO9KtAK

The clampdown on protests and dissent has continued in Maldives. On International Labour Day on 1st May 2021, a demonstration was held against increasing incidents of sexual harassment in the workplace and the impunity enjoyed by perpetrators of such gender-based crimes. According to reports, the protesters, mostly youths, used megaphones and placards to voice their concerns. They maintained social distancing and wore masks during the protest.

The police reportedly became more aggressive after questions were raised against the former Tourism Minister, who left the Maldives while on trial on seven counts of sexual violence and harassment, and the incumbent Home Minister’s alleged sexual misconduct which remains to be investigated. This then led to excessive police force and arrests. Video footage of the protesters being pepper-sprayed in close proximity as well as videos showing injuries sustained due to police actions, circulated on social media.

#Maldives🇲🇻: @RSF_inter firmly condemns the police's excessive use of violence against journalists at the end of Saturday's #LabourDay protests, and joins @mjamaldives in asking Pdt @ibusolih to ensure a safe working environment for reporters in the field.https://t.co/Lz4mSWimyM

The Maldives Journalist Association (MJA) reported police brutality against several journalists covering the protest and urgently asked the authorities to conduct a thorough probe into the incident. While the police ordered an inquiry into the excessive use of force by police officers, identified officers were immediately suspended from frontline duty.

The authorities have continued to use the Health Protection Agency guidelines - which bans gatherings of more than five people to curb the spread of COVID-19 - to stifle protests.On 1st April, 12 people were arrested at a demonstration that called for harsher punishment for sexual harassment.

Previously the CIVICUS Monitor documented a crackdown on protests by opposition political parties in the Maldives between January and March 2021 as well as attacks on media workers covering the protests.

In November 2020, the Maldives Parliament rejected amendments to the Freedom of Peaceful Assembly Act, which would have allowed protests in the capital city of Malé without prior permission. Currently any gatherings held in the capital must obtain prior permission from the police, unless the gathering is held at a location pre-approved by the Ministry of Home Affairs, and limited to one closed-off location in the city. According to international watchdog groups, these restrictions have rendered the right to the freedom of peaceful assembly meaningless under the law.

Lack of progress around cases of human rights defenders

#YameenRasheed was murdered four years ago today. Despite the #Maldives Govt.'s election pledges to bring his perpetrators to #justice, it has failed to deliver #JusticeForYameen

The cases of blogger Yameen Rasheed, killed in 2017, and journalist Ahmed Rilwan, missing since 2014, remain marred with uncertainties. The Presidential Commission established in 2018 to investigate suspicious deaths and disappearances has been silent on the progress of the investigations.

Yameen Rasheed was stabbed to death in the early hours of 23rd April 2017, in a brutal attack that shook the nation. His body was found at the entrance to his home, with over 30 stab wounds and a slit throat. He was the leading campaigner for justice for his close friend and journalist Ahmed Rilwan Abdulla, who was forcibly disappeared in August 2014.

In April 2021, the Maldivian Democracy Network (MDN) and FORUM-ASIA, in a joint statement around the fourth anniversary of the death of Yameen Rasheed, urged the government to uphold its election pledge and conduct transparent, fair and thorough investigations to bring perpetrators to justice to restore the rule of law.

According to the two organisations, the five-member Presidential Commission has been severely impaired since 2019 following the resignation of two of its members, including the chairperson of the Commission, and the government’s failure to appoint replacements. In 2019, the former Prosecutor General instructed the Commission to halt the investigation into Yameen Rasheed’s murder, citing interference with an ongoing criminal court trial. To date, the Commission has remained silent about the progress in its investigation and no updates have been shared with Yameen Rasheed’s family.

The family of Yameen Rasheed has repeatedly raised concerns about police negligence and prosecutorial failures during the investigation and the trial hearings. The hearings than began in 2017 were held behind closed doors on the pretence of national security concerns. Subsequent hearings were marred by delays and repeated cancellations. In the course of the trial, several witnesses for the prosecution withdrew their statements or refused to testify, citing threats and intimidation. Some witnesses have also alleged torture in detention.

MDN and FORUM-ASIA said that similar failures continue to perpetuate impunity for the disappearance of Ahmed Rilwan Abdulla. The Maldivian police have refused to investigate two of their intelligence officers who intercepted Ahmed Rilwan Abdulla on the day he was abducted. Three men charged with his enforced disappearance were acquitted on the basis of state negligence and failure to adhere to court protocols rather than a lack of evidence.

On 7th April 2021, 30 human rights organisations sent a letter to President Solih asking for the legal basis for the arbitrary de-registration of human rights group, the Maldivian Democracy Network (MDN) by the government in December 2019. The letter also asked him to refrain from influencing the ongoing judicial process where MDN is seeking to revoke the unfair action taken against it.

On 10th March, President Solih commented that the absence of MDN members from the country has impeded the investigations against them. In response, the opposition accused him of deliberate inaction and asserted that, if required, an Interpol notice against the members should be issued. Thus, MDN and its members continue to be in a precarious position as the government and the opposition continue to target them for their human rights work.

As noted by the CIVICUS Monitor, MDN, the oldest human rights organisation in the Maldives, had long been subjected to threats and intimidation from religious hardliners in response to their work. In 2016, it published a report regarding radicalisation in Maldives which was alleged by the government and conservatives to be anti-Islam. This ushered in a fresh wave of threats and protests against its work, causing it to retract the report in October 2019 and issue an apology. In November 2019, the Ministry of Youth, Sports and Community Empowerment revoked its licence and as MDN was awaiting clarification on this decision, a formal notice of dissolution was issued a month later.

Despite the rise in Press Freedom Index 2021 rankings for the Maldives to 72nd place this year as opposed to 79th in 2020, concerns remain around press freedom in the Maldives. After his election, President Solih followed through on a campaign pledge to repeal the Defamation Act and journalists in the Maldives say that they no longer worry about facing hefty fines and criminal charges for doing their jobs. However, Reporters Without Borders said that the police continue to use physical violence against journalists covering demonstrations and the unresolved cases of missing journalist Ahmed Rilwan and slain blogger Yameen Rasheed.

Human Rights Watch stated that the government’s failure to successfully investigate and prosecute these and other cases of attacks on freedom of expression, particularly by extremist Islamist groups, illustrates the deeply entrenched impunity for such crimes. Most recently, this was manifested in the attempted assassination in May 2021 of Mohamed Nasheed, the former Maldivian president and current speaker of parliament.

On 30th May 2021, the Maldives Media Council (MMC) and Maldives Journalist Association (MJA) raised concerns about an inquiry ordered by a parliamentary committee around a report by local media Mihaaru News. The outlet had published a piece, citing an "unnamed source” on Mohamed Nasheed's security detail, in relation to the terror attack on him. The report indicated that Nasheed was warned by security forces of their inability to provide him with security at his current residential address.

The ruling MDP party criticised the news agency for attempting to spread propaganda and called for an investigation to identify whether the source belonged to Nasheed’s security team. The MMC stated that that “no authority can force anyone to reveal their informant behind certain information”.