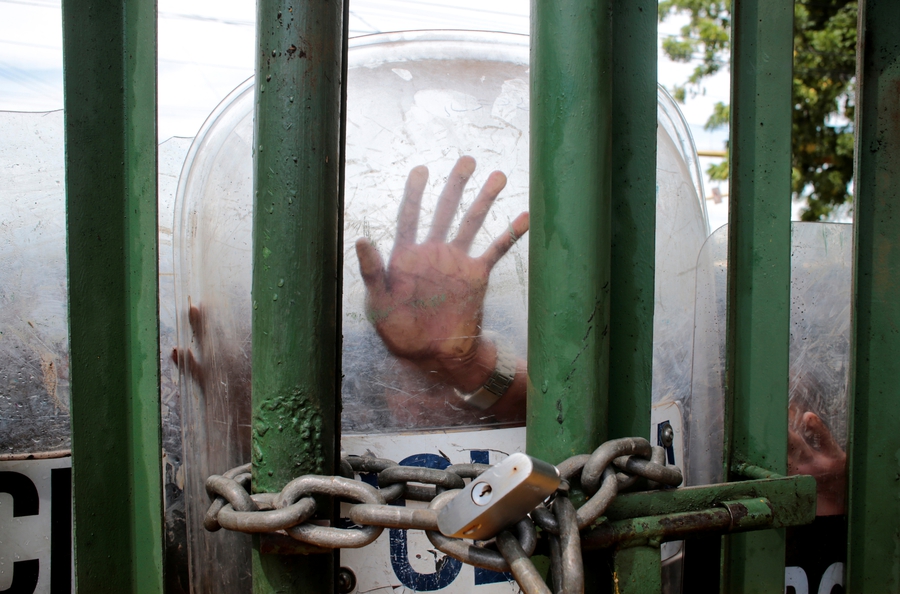 As previously reported on the CIVICUS Monitor, in May 2021 Nicaraguan authorities began an investigation into former staff members of the Violeta Barrios de Chamorro Foundation, including its former director Cristiana Chamorro, over alleged financial irregularities. Civil society organisations warned that the investigation’s objective was to discredit Chamorro and deter her from running as an opposition candidate in upcoming presidential elections.

On 1st June 2021, prosecutors filed charges of “money laundering”, “ideological falsehood” and “abusive management” against Chamorro and announced that they had requested that she be disqualified from holding public office. By the next day, her house was raided and she was placed under house arrest. In a wave of arrests over the following days, Nicaragua’s authorities also ordered the detention of three other presidential pre-candidates, Arturo Cruz Sequeira, Félix Maradiaga and Juan Sebastián Chamorro.

In the sections below, this update details several developments related to this crackdown on the political opposition and on civic space.

On 28th May 2021, two former employees of the Violeta Barrios de Chamorro Foundation, Walter Gómez and Marcos Fletes, were detained by police and armed civilians. They were accused of alleged money laundering and placed in 90-day preventive detention while a police investigation is ongoing. A reform of the Penal Code in February 2021 extended the period in which a person can remain in jail without charge from 48 hours to 90 days; this was the first time the new legislation was applied against civil society representatives.

The Inter-American Commission on Human Rights (IACHR) condemned this detention without a judicial order, urging the State of Nicaragua to immediately report on the whereabouts of Gómez and Fletes. As reported by Nicaragua Investiga, the two were still being held without communication with their families on 4th June 2021.

In another development, the Attorney General’s Office issued a statement saying that opposition pre-candidate Félix Maradiaga’s arrest was related to an investigation into alleged irregularities and illicit activities by civil society groups Fundación Libertad (Freedom Foundation) and the Instituto de Estudios Estratégicos de Políticas Públicas (Institute of Strategic Public Policy Studies - IEEPP), which he led. The IEEPP’s legal personality was revoked in 2018 during a crackdown on civil society.

Meanwhile, opposition pre-candidate Juan Sebastián Chamorro was summoned by police to depose in an investigation against the CSO Fundación Nicaragüense para el Desarrollo Económico y Social (Nicaraguan Foundation for Economic and Social Development – FUNIDES). He was detained when complying with the citation. The police accused him of acting to “undermine sovereignty and independence”, based on a recently approved law which civil society warned would be used to persecute the opposition and further close civic space.

On 28th May 2021, police officers prevented a small protest by members of Unidad Nacional Azul y Blanco (UNAB) against the government and the recent crackdown on the opposition. Video recorded by Nicaragua Actual shows police officers surrounding the group of protesters and pushing them against a wall as they attempted to march. On 8th June 2021, UNAB director Violeta Granera was detained over alleged actions to “undermine sovereignty and independence”.

In a separate incident, on 30th May 2021 police officers and armed civilians attacked members of Asociación Madres de Abril (Mothers of April Association - AMA) who were holding a private event at the Central American University in commemoration of the victims of the “Mothers’ Day Massacre” which resulted in the police killing of 19 protesters in 2018. Police officers beat leader Francis Mejía, interrogated Raquel Sevilla and seized advocacy materials from her and other AMA members. As previously reported on the CIVICUS Monitor, harassment and attacks against members of AMA increased in the context of the third anniversary of Nicaragua’s human rights crisis as families sought to organise remembrance events.

At least 16 journalists were summoned to give witness testimony in the investigation against the Violeta Barrios de Chamorro Foundation, reported the Committee to Protect Journalists (CPJ). María Lilly Delgado, a correspondent for Univisión, told CPJ that she was cited on 24th May 2021 and that prosecutors refused to question her in the presence of her lawyer when she responded to the summons. In a second meeting, she was told that her “status had changed from being a witness to being investigated” – which was later confirmed with a statement from prosecutors requesting precautionary measures against her. Two other people were reportedly converted into suspects when they refused to testify without the presence of a lawyer.

Journalists attempting to cover the arrests of opposition leaders also said they faced intimidation and their work being obstructed by police. Civil society organisations denounced these developments as an attempt to intimidate journalists and silence independent press in the electoral context. Pedro Vaca, Special Rapporteur for Freedom of Expression of the IACHR, also commented:

“It is frightening to note that there is not a single state power that is outside the sophisticated censorship device that has been activated in [Nicaragua]. The 'express' summons to journalists by the Attorney General's Office are the latest method to intimidate and stifle public debate”.