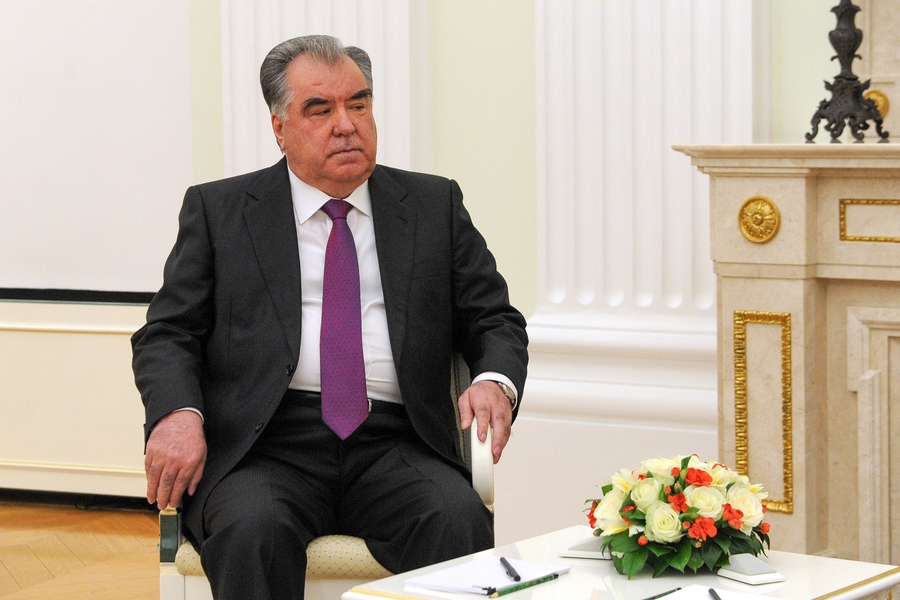 President Rakhmon has claimed victory over COVID-19 in the country (Sputnik/Mikhail Klimentyev/Kremlin via Reuters).

This report which covers developments affecting the freedoms of expression, association and peaceful assembly in Tajikistan was prepared by International Partnership for Human Rights (IPHR) for the CIVICUS Monitor for the period August 2020 to March 2021.

Freedom of expression and information are so tightly controlled in Tajikistan that it has become virtually impossible for journalists to cover issues which the authorities perceive to be “sensitive” without endangering their safety or that of their relatives. The authorities use legal provisions which punish incitement to hatred or discord or “spreading of false information” to silence critical voices and create a climate of fear. Apart from targeting independent journalists, state persecution is particularly aimed at human rights lawyers and political opponents.

In the 2021 Freedom House rating, Tajikistan ranks as "not free" with one point less than last year. This puts Tajikistan in 13th to last place out of over 200 states and territories, with a score of 8 out of 100. The World Press Freedom Index, compiled by Reporters without Borders, (RSF) shows that Tajikistan has fallen one place and is now ranked 162nd (out of 180).

These developments are covered in more detail below.

On 14th October 2020 the Lower House of Parliament of Tajikistan unanimously supported amendments to the Code of Administrative Offences which provide for administrative punishment for actions aimed at incitement of national, racial, local or religious enmity or discord, humiliation of national dignity, as well as propaganda of exclusivity of citizens according to their religion or their national, racial or local affiliation. If these actions are committed publicly or using mass media, they will be punishable by a fine of up to the equivalent of approximately 480 EUR or administrative arrest of up to ten days. For a repeat offence, persons can face criminal prosecution for “incitement” (Article 189 of the Criminal Code).

As a consequence of the Supreme Court ruling in February 2020 which blocked the independent news outlet Akhbor after finding that it offers a platform to “terrorists and extremists”, Akhbor ceased its activities on 13th November 2020. Journalists cooperating with the media site could have faced criminal charges and be equated with militants or members of a banned organisation.

The effects of the law on “spreading false information”, which came into force in July 2020, were immediately visible: local media, including the few remaining independent media outlets, mainly quote governmental statistics (with the Ministry of Health and Social Protection as the primary source). Journalists report that it has become difficult to fact check any of the official statements. Citizens have also become more wary of commenting and sharing any information on social media regarding the number of COVID-19 patients and deaths. Human rights defenders (HRDs) have reported cases where Facebook users who posted non-governmental data about COVID-19 were summoned to the prosecutor's offices and warned.

In his annual address to parliament on 26th January 2021, President Emomali Rakhmon claimed victory over the coronavirus in the country but called on residents not to ignore epidemic measures. It is feared that such a statement could negatively affect free access to information and freedom of expression in the country. Anecdotal evidence suggests that hospitals are refusing to accept patients with COVID-19 symptoms unless they are referred by local health centres, which in turn often refuse to refer them for treatment in order to avoid increasing the statistics of those infected with the coronavirus in the country.

On 29th January 2021 independent journalist Daler Sharipov was released after completing a one year prison term. In April 2020, he was sentenced to imprisonment on what was widely regarded as politically motivated charges. Human rights defenders had expressed their concerns that the 32-year-old journalist, who frequently wrote about controversial issues such as human rights and religion and has criticised government policies in these areas, was targeted in retaliation for his legitimate journalistic work (see previous Civicus Monitor update).

On 4th March 2021, two Radio Ozodi journalists, Mullorajab Yusufzoda and Shahlo Abdullo, were attacked at a Soro Oil petrol station in Dushanbe while carrying out their professional duties. The journalists wanted to report on the increase in petrol prices when one of the gas station's security guards physically attacked them. Yusufzoda, who was punched on the jaw, needed medical treatment. The two journalists filed a police report later that day. According to news reports the attacker, who is unknown to the two journalists, was detained. It is unknown whether he has been charged with a crime.

Licensing requirements for radio and TV broadcasters and accreditation of journalists working for foreign media outlets have been used by the authorities to put pressure on journalists and media outlets and to discourage critical reporting. In addition, the State Committee on Television and Radio Licensing’s website does not provide transparent information about how to obtain licences, making it difficult for applicants to follow the correct procedure. For over four years now, since 2017, no new print-media has been able to register with the Ministry of Justice. In addition, Article 30 of the Media Law of Tajikistan provides for aspects of “authorisation” or “permission” for accreditation, which contradicts international standards.

Human rights defenders and media experts have criticised the current “Regulation on Accreditation of Foreign Media Correspondents in Tajikistan” as outdated as it refers to provisions of the old Media Law. Media organisations called on the Tajikistani authorities to review this document and to bring it in line with international obligations.

“Denying accreditation is a classic method of censoring foreign media. But it violates the provisions of paragraph 21 of Tajikistan’s current accreditation regulations. We condemn the use of such methods and we ask the authorities to respect the freedom to inform of correspondents working in Tajikistan.” Jeanne Cavelier, the head of RSF’s Eastern Europe and Central Asia desk.

In early August 2020, the Ministry of Foreign Affairs refused to extend accreditation for Anushervon Aripov, a journalist from the TV channel “Nastoyashee Vremya” (Current Time), a Russian-language TV broadcaster operated by Prague-based Radio Free Europe/Radio Liberty (RFE/RL) in cooperation with Voice of America. The Tajikistani Ministry of Foreign Affairs had criticised a television report by Aripov on President Rakhmon's premature start to the election campaign, and shortly afterwards it announced that his accreditation had not been renewed.

Since the approval of amendments to the law “On the Election of the President of Tajikistan" in 2018, local journalists require additional accreditation (in the form of a certificate) from the Central Election Committee in order to cover the elections, and thus several journalists were prevented from covering the election process in 2020.

Human rights defenders in the country report that people are discouraged from participating in peaceful protests for fear of reprisals from the state. The authorities use various methods to silence any voices critical of state policies. On 21st January 2021, police in Khujand simulated an incident of public unrest because of power blackouts to demonstrate how riot police might be deployed to dissolve such unrest. Footage of the training was repeatedly looped on news broadcasts.

Persecution and silencing of opposition

In recent months the Tajikistani authorities have increased pressure on opponents of the government, both within the country and abroad. Several activists, government critics and suspected supporters of banned opposition groups have been jailed.