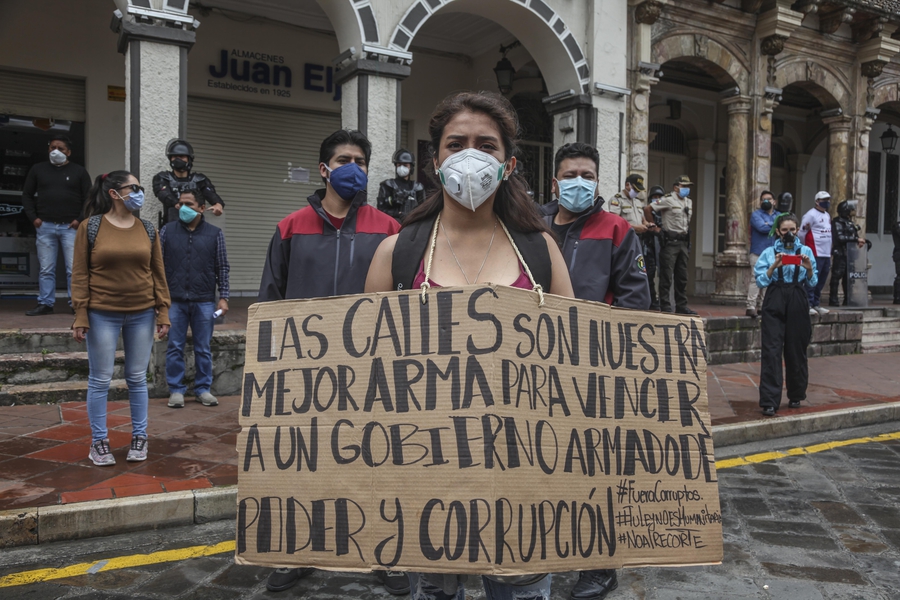 On 16th March 2020, Ecuador’s government published a decree declaring a "state of exception" in response to the coronavirus (COVID-19) pandemic. This suspended some individual rights related to freedom of association and assembly, and provided government with authority to use digital tools to monitor individuals under mandatory isolation or quarantine. The virus had a devastating impact in the country, particularly in Guayaquil where the healthcare and funeral systems collapsed in late March 2020.

During the crisis, Ecuador’s president Lenin Moreno introduced a series of austerity proposals which civil society has argued could affect human rights and generate social instability in the country. On 19th May 2020, the government announced new austerity measures to generate a budget cut of 4 billion USD in public sectors. Several public companies would be closed or merged, which will lead to the dismissal of thousands of public employees. The government justified the measures as a response to the economic losses incurred during the pandemic.

Unionised workers, students and Indigenous peoples mobilised to protest in May and June 2020, often in marches and demonstrations, keeping to social distancing and health protocols. As reported on the Monitor, the austerity programme from Ecuador’s government previously led to massive protests in 2019.

In May, hundreds of students and teachers mobilised against budget cuts in public higher education announced by the government on 3rd May 2020. The measure would affect 32 public universities, reducing their budgets by nearly 100 million USD. On 5th May 2020, around 200 students joined a protest on the campus of the Central University of Ecuador in Quito, wearing masks and maintaining social distance as they chanted and held signs against the cuts. “Biosecure” marches and protests were organised in various cities on 11th May 2020 by student associations and similar mobilisations continued in the following weeks.

On 14th May 2020 in Guayaquil, a peaceful demonstration to protest the lack of COVID-19 policies was repressed by police. According to reports, officers used sticks to beat protesters and disperse the demonstration. Four protesters were detained and several were reported injured. Reporters covering the protest were also attacked and a photojournalist with Diario Expreso said police officers on motorcycles tried to intimidate her and push her to the ground.

On 25th May 2020, thousands of people took to the streets in Quito and Guayaquil to protest against president Lenin Moreno’s attempts to push through a series of neoliberal economic reforms during the COVID-19 pandemic. Unions protesting also questioned labour reforms while students joined the mobilisation highlighting the budgetary cuts in education. The cross-sectoral mobilisation was organised by the People’s Front, the Confederation of Indigenous Nationalities of Ecuador (CONAIE), the Indigenous and Peasant Movement of Cotopaxi (MICC) and the Unitary Front of Workers (FUT), among others. “If the coronavirus doesn't kill us, the government will,” a trade union leader told Reuters news agency.

On 29th May 2020, Ecuador’s Ministry of Defence adopted a regulation that allows the progressive use of force by members of the Armed Forces in meetings, demonstrations and disturbances that lead to “situations of serious internal commotion”. According to an analysis by Human Rights Watch, this regulation would enable the military to use lethal force in circumstances that are not in accordance with international human rights standards. As previously reported on the Monitor, Ecuador’s government has previously minimised the extent of excessive force used by law enforcement in response to mass protests in 2019.

On 1st June 2020, the Ombudsman’s Office issued a public statement demanding the regulation’s repeal. The Office warned that the text is not aimed at protecting the human rights of protesters, but rather at giving the armed forces an instrument to justify the use of force. On 25th June 2020, Ecuador's Constitutional Court temporarily suspended the regulation, accepting an unconstitutionality claim filed by human rights organisations.

On 31st May 2020, a stick of dynamite exploded in front of the Teleamazonas TV station’s office in Guayaquil, shattering glass but causing no injuries. The building’s security footage captured a person exiting a white car, tossing an object and driving away shortly before the explosion rocked the building. The Committee to Protect Journalists (CPJ) reported that the station’s directors believe this attack was in retaliation for a series of reports about alleged corruption in the procurement of supplies for state-run hospitals during the coronavirus outbreak. An investigation is ongoing. The Inter-American Press Association (IAPA) and the CPJ condemned this attack against the headquarters of the Teleamazonas.

Journalist attacked by relatives with alleged ties to local government

On 28th April 2020 in Quinindé, UNITV news anchor Henry Córdova Correa was attacked by relatives in retaliation for his reporting. One of the attackers threw bricks and a motorcycle helmet, leaving the journalist with injuries that included a broken leg. Córdova stated that he and his wife had previously received insults on social media from family members who are close associates of the town’s mayor and that he believes the attack was not the result of a family dispute, but retaliation for his recent criticism of Quinindé’s response to the coronavirus outbreak in the region. Córdova filed complaints with the local police and a local branch of the national attorney general’s office but two months after the attack neither of the perpetrators had been charged.