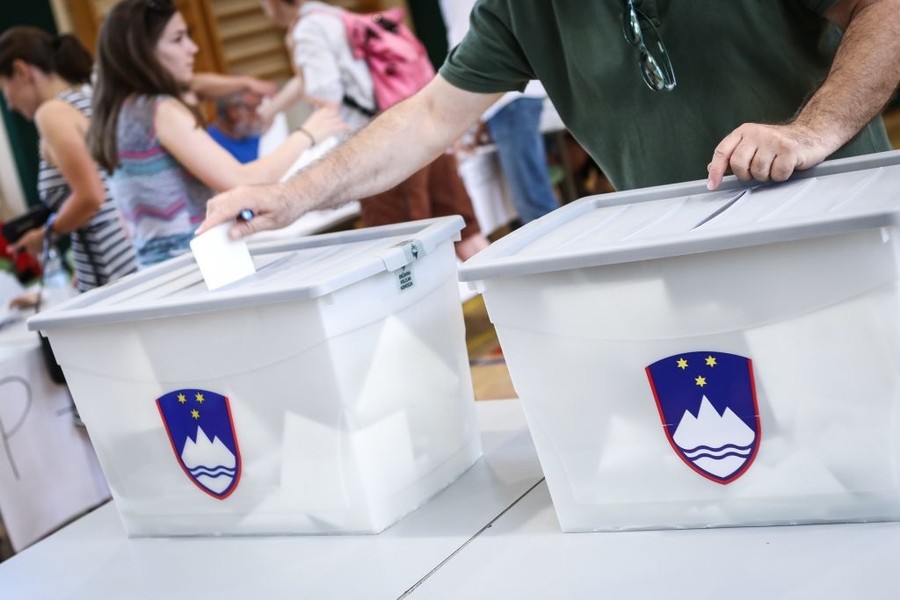 Slovenian voters cast their ballots in elections on 3rd June 2018

Slovenia had seen significant improvements in recent months concerning civic space, largely as a result of the new NGO law passed by parliament on 23rd March 2018. Nevertheless, implementation of the law and other initiatives depends on political will from the new government to be formed following elections on 3rd June. Lidija Živčič, an expert from Slovenian NGO Focus - Association for Sustainable Development, reported that civil society is closely tracking developments related to the formation of a new government, as discussions between the main parties continued at the time of writing.

During the election campaign, on 17th February, the NGO sector had come under attack when the leader of the Slovenian Democratic Party (SDS), Janez Janša, stated that NGOs are financed from the public budget, European funds and the Soros Foundation, and "they are planning to attack and try to destroy the nation, family, private property and private education". The SDS won 25 seats in parliament, more than any other party, but fell short of attaining an overall majority.

A possible SDS government is a concern for many civil society organisations. During a pre-election debate, SDS deputy Branko Grims announced that his party would abolish public funding for NGOs, saying "Three hundred million Euro is thrown out of the window annually for NGOs, some of which, like the Peace Institute, has no positive impact on Slovenia" (translated from Slovenian). Following strong criticism of these positions from civil society, the party softened its position, promising to continue to finance local culture, sports, firefighters and charities. Nevertheless, the Director of CNVOS (Center for Information, Cooperation and Development of Non-Governmental Organizations), Goran Forbici stated in a press release that this did not ease civil society’s concerns:

“The SDS partially withdrew its threat, but it still clearly predicts the discrimination and exclusion of those organizations that ideally and politically disagree with its position. And these predictions are not less dangerous than the original threat by Grims. The announcement that certain organisations categorically will be cut off from public funding can therefore only mean arranging the results of public tenders or political interference in the decision-making of professional commissions in public tenders.” (translated from Slovenian)

SDS might receive the mandate to build a coalition however most parties are said to be unwilling join to an SDS government. The future government might be formed by centre-leaning forces coming together, while a wide coalition would increase the risk of political instability, which is also a concern for civil society, especially in the field of culture. The Non-Governmental Organization Asociacija working on art and culture said that during the electoral campaign all political representatives supported more actions and funds for the cultural sector, but instability could reduce the likelihood of these promises becoming reality.

Several national and international newspapers expressed concern about the influence of media outlets close to Viktor Orban on the outcome of Slovenia's election. The CIVICUS Monitor had already reported how Hungarian media groups closely allied to the Hungarian Prime Minister own a share of Slovenian media outlet including TV nova24, and magazine Skandal24, which is affiliated to SDS. These concerns were raised before the Court of Auditors in relations to foreign funding to political parties. However, while the Slovenian law on political parties prohibits foreign funding for parties, it does not address foreign funding by companies owned by a political party.

At the beginning of June, the Slovenian Association of Journalists reported that:

”Following media reports claiming that pro-Orban media companies have provided financial support to SDS-linked outlets and their election campaign, two journalists have received e-mails from one of the SDS-linked media outlets, Škandal24, asking questions regarding journalists’ personal life aiming to discredit them and their work in public and finally pressure them to drop the stories.”

The organisation highlighted that pressure on journalists increased in the country during  the elections, an issue also picked up by the Council of Europe. Following the vote, editor in chief of Škandal, Marjanca Scheicher, announced that only the publication's online edition will continue to exist, leading to fears that the printed version was used solely as a PR tool during the electoral campaign.

In June 2018, NGO Asociacija reported increasing attacks against artists in Slovenia. In one of the most recent incidents, dramatist and artistic director of the Slovenian Youth Theater, Goran Injac, received several threatening emails and offensive messages on social media from Slovenian citizens. This occurred after a group of right-wing extremists stormed the stage and stopped the Theater's performance during the Brno festival in the Czech Republic on 26th May.

Following the events at the Festival @Divadelnisvet @Brno where our performance was brutally interrupted, the Mladinsko Theatre sent the following letter of protest to the Ambassador of the Czech Republic in Slovenia, Her Excellency, Ms Věra Zemanová.➖ https://t.co/QhuCaNWWn3 pic.twitter.com/da47dUbwz0

When asked why he was attacked, Goran told RTL Slovenia:

”I'm the first foreigner to get such a position in a Slovenian theatre. This is because, from the nationalistic point of view, the institutions of culture should protect and fulfil the national interest, and for the national interest only the interest of the privileged majority is considered. It does not surprise me all, I have been experiencing all this since the first day...because I am at a workplace that was traditionally reserved specifically for Slovenians. I have been dealing with this from the beginning, but now that the political situation has radicalized, hate speech and attacks on non-Slavs have become permissible.” (translated from Slovenian)

Representatives of public institutions and non-governmental organisations in the field of arts and culture, employed and self-employed artists and cultural workers sent a letter to the President warning that the messages against the Director:

“mirror the extreme right-wing and nationalist violence, the misunderstanding of the function of public cultural and other institutions, and, above all, the current...public atmosphere, which was launched by the electrified pre-election campaign in the Republic of Slovenia". (translated from Slovenian)

One of the initiators of the protest letter, Dragana Alfirević from the art association Nomad Dance Academy said:

"It seems to me that a rather aggressive and uncontrolled political election campaign opened up space for various manipulations with people. It seems to me that for such a situation, politicians are the most responsible, who should give an example and pass the passions that accompany the campaign. It is a global phenomenon, not just a Slovenian phenomenon. So we should ask ourselves why this is happening? People are furious because of the uncontrolled flow of global capital, due to the inability of national states to deal with this problem seriously. People are losing their jobs, personal spaces are shrinking. Therefore, I believe that this hate speech is a reaction to all these processes, and therefore it is necessary to deal with this. Today we are talking about an attack on our colleague Goran Injac, but he is not an isolated case.”

On 27th March 2018, RTV Slovenia, a public broadcasting station, published a "Statement on Responsible Public Practice of Employees of RTV Slovenia" for its employees, demanding that "journalists, editors and other creators of radio and television programs must not abuse the position in RTV Slovenia with their public and political activities, leisure activities, private activities and financial interests, harm the accuracy, impartiality and the credibility of RTV Slovenia programs, jeopardize the reputation and goodwill of individuals or the entire public institution and the trust of listeners and viewers in the content of RTV Slovenia programs." The statement was released following a Tweet by SDS leader, Janez Jansa, in which he criticised a journalist from RTV for a poster on her social media that depicts the SDS party with the Nazi Swastika symbol, and requested the management team to react. This also drew strong criticism of the journalist by SDS supporters on social media.

Although RTV management denied the statement was a response to Jansa, the timing of the statement caused concern within civil society. In a statement, the Slovenian Association of Journalists drew “attention to such a thin and sensitive separation between the demands of the media in protecting their reputation and credibility and restricting the freedom of speech of journalists". (translated from Slovenian) Slovenian Association of Journalists' Secretary-General, Špela Stare, reported to the European Civic Forum that the debate is quite controversial in this difficult environment for journalists. Restricting journalists’ freedom of expression in the personal sphere is risky. Journalists cannot completely subordinate their views to the editorial or business lines of the companies in which they are employed. The statement stressed:

“Regardless of whether the media will trust the responsibility of their journalists without additional regulation or they will decide to accept the rules of communication on social networks, the rules interfere with the right to express[ion of] journalists, and therefore we estimate that they need to be taken with a great deal of prudence, but never without a thorough discussion within the editorial and participation of all members of the collective. Any violation of the rules should be dealt with within the editorial boards and not publicly.”