On the Watchlist: Concerns over moves to undermine judicial independence and attempts to muzzle CSOs more 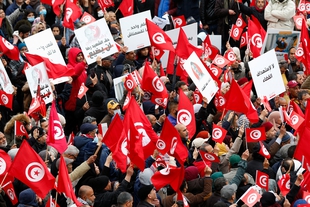 Following the freezing of parliament and the dismissal of the head of government on 25th July 2021 (see previous update), President Kaïs Saïed decided to dissolve the Superior Council of the Judiciary and replace it with a provisional mechanism and took further steps to concentrate his power. On 1st June 2022, judicial independence was further severely hampered with the decision of President Kais Saied, via a Presidential decree, granting himself absolute power to fire judges summarily, and by promptly dismissing 57 judges. As a result, anti-government protests have been staged, including against the upcoming July Constitutional referendum.

Following the freezing of parliament and the dismissal of the head of government on 25th July 2021 (see previous update), President Kaïs Saïed decided to dissolve the Superior Council of the Judiciary and replace it with a provisional mechanism, which has been critically monitored by civil society activists and the international community.

Ahead of its human rights record review at the Universal Periodic Review in November 2022, several human rights organisations monitored the situation on freedom of association, expression and peaceful assembly and indicated a worsening situation in the country.

As a result of the concerning developments, over 100 civil society organisations issued a joint statement calling for an end to restrictions in Tunisia.

“Amidst growing economic and social challenges, over the last 12 months, President Kaïs Saïed has taken unilateral decisions to consolidate his authority and continues to silence those who speak out about the decline of civic freedoms."

🇹🇳President Kaïs Saïed has, in the past year, implemented several decisions aimed at consolidating power in the hands of the executive!
🚨Are we witnessing a gradual slide towards authoritarianism in #Tunisia❓
More info at https://t.co/smyRBBd4Af
⏬⏬⏬⏬ pic.twitter.com/F2q3GKvg94

The situation remains critical in Tunisia, especially with regard to judicial independence.

On 1st June 2022, judicial independence was further severely hampered with the decision of President Kais Saied, via a Presidential decree, granting himself absolute power to fire judges summarily, and by promptly dismissing 57 judges. In a statement, 10 human rights organisations highlighted their concerns and noted that Decree 2022-35 gives the president the authority to fire judges and prosecutors at will, based on reports by unspecified “relevant bodies” that they are a threat to “the public security” or “the supreme interests of the country,” and for acts that “impinge on the reputation, independence or proper functioning of the judiciary.”

“With this decree, President Saied has removed whatever autonomy the judiciary in Tunisia still was able to exercise. Judges should be subject to fair, impartial, and appealable disciplinary procedures, not removal at the executive’s whim”- Salsabil Chellali, Tunisia director at Human Rights Watch.

“Since last July, President Saied has dismantled almost all institutional checks on his power. His new decree-law annihilates what remains of judicial independence and strengthens his authoritarian grip on the country,”- Wadih Al-Asmar, President of EuroMed Rights.

“Through these arbitrary dismissals, the President is sending a chilling message to the very judges who should safeguard the rule of law and human rights and serve as a check on his abuses of power,”- Said Benarbia, director of the International Commission of Jurists’ Middle East and North Africa Programme.

A brief by Legal Agenda explains that a specific part of the decree states that a criminal prosecution will automatically commence against a judge after dismissal. If the judge wishes to challenge such a dismissal it can only take place after the final ruling is issued. As a result, this infringes on administrative justice.The brief stated:

“The president – via a decree that he tailored to his own interests while ruling as a de facto autocrat – has deepened judges’ vulnerability and undermined their legal security, the most important pillars of which include the right to administrative litigation.”

The Center for Social Sciences Research and Action found that during May 2022, 51 collective actions took place in Tunisia, 55% of them organised by workers’ groups. As a deal between Tunisia and the IMF is under way, protests took place to show social discontent and reject austerity measures. The main demands in the collective actions included wage increases, payment of financial dues, access to healthcare coverage,and social benefits. Protests which took place include:

A report entitled “Reporting Under the Weight of Fear: Restrictions on the media in Tunisia under the president's exceptional measures” which documents developments between July 2021 to April 2022 highlights an increase in violations against journalists and media. Violations documented include “harassment, military trials, smear campaigns on social media, and sometimes official incitement by the president himself.”

The National Syndicate of Tunisian Journalist issued its May 2022 report documenting attacks on journalists and photographers. Violations increased during the month of May 2022, with a total of 17 incidents occurring, compared to April 2022 which saw ten. Amongst the documented violations was harassment, verbal assault, arbitrary detention, jail and prosecution.

As reported by the New Arab, on 11th June 2022, Tunisian police arrested journalist Salah Attia after he accused the President of asking the army to close the headquarters of the powerful UGTT labour union during a media interview on Al Jazeera.

Earlier in March 2022, Khalifa Guesmi, a correspondent for the country's leading radio station Mosaique FM, was detained under anti-terrorism laws, after he refused to reveal his sources. Guesmi was released a week later but is still facing charges. If convicted he could face 20 years in prison.