Protests over women's rights: “There is a war on women.” more

Protests in Sudan continue amid crackdown and internet blackout more

The CIVICUS Monitor speaks to a Sudanese activist more

No sign of civic freedoms improving, despite activists' release more 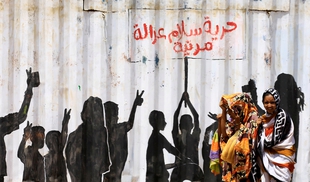 Violations against women human rights defenders (WHRDs) continue. One of the violations taking place in this reporting period is that of Waad Bahjat, women’s rights defender and blogger, who was detained while broadcasting a Facebook live to document an incident in which several women were reportedly harassed by policemen and military men. Bahjat was charged with defamation, “insulting a public servant”, “publishing false news” and “public annoyance”. Demonstrations for women's rights and against gender discrimination and violence took place between January and April 2021. During April 2021, the Sudanese government ratified the UN’s CEDAW convention, however with reservations. Several journalists were arrested during the reporting period.

Violations against women human rights defenders (WHRDs) continue. One of the violations taking place in this reporting period is that of Waad Bahjat, women’s rights defender and blogger. On 9th November 2020, Bahjat was arrested by a policeman while she was in her car outside a petrol station in Khartoum broadcasting on Facebook live to document an incident in which several women were reportedly harassed by policemen and military men. Bahjat was charged with defamation, “insulting a public servant”, “publishing false news” and “public annoyance”. While in detention, Bahjat was allegedly subjected to threats and ill-treatment, including cuts and bruises on her shoulders and arms.

The Observatory for the Protection of Human Rights Defenders called for Sudanese authorities to guarantee the physical integrity and psychological well-being of Bahjat and put an end to any kind of harassment against her, including at the judicial level. As documented by Frontline Defenders, on 31st March 2021the Criminal Court of Khartoum sentenced Bahjat to six months’ suspended imprisonment, and a fine of 10,000 Sudanese pounds (approximately 22 Euros). In adherence to the Sudanese Penal Law, the woman human rights defender remains under the supervision of the Sudanese police.

📢We call for the end of the judicial harassment against her and for all charges to be dropped!

On January 2021 demonstrations organised by women's rights groups demanded that the new Sudanese government ratify the Convention on the Elimination of All Forms of Discrimination against Women (CEDAW). News sources note that the rally was called for by 60 feminist organisations, with protesters chanting: “The entire world, except us. You make us feel ashamed.”

On 9th April 2021, hundreds of women took part in a protest against gender discrimination and violence, organised by over 50 local organisations. The protests come after a 13-year-old girl was killed by her father for wanting to attend private school. The father was arrested after thousands of people campaigned on social media. Speaking to The New Arab, Yosra Akasha from Strategic Initiative for Women in the Horn of Africa (SIHA) said:

"We believe that there is a war on women in Sudan now. This war is reinforced by the lack of protection for women and the violence that they endure not only on the streets, but also in their own homes...The government has an obligation to end all forms of discrimination, but we are still governed by the same laws as during Bashir's era and the current government has not since ratified the conventions that protect women's rights."

During the protest, several protesters were assaulted. In one incident, one of the protesters was injured after being driven over by a vehicle. The driver also verbally and physically attacked protesters.

On 27th April 2021 the Sudanese government ratified the UN’s CEDAW convention, however with reservations to articles 2, 16 and 29/1 without further details. However civil society organisations have raised concerns over the reservations, stating that this defeats the purpose of ratification, since cabinet failed to endorse three fundamental articles of the convention which pertain to equality between men and women in matters including marriage, divorce and parenting.

“Sudan’s transitional authorities should make clear that security forces are not above the law by promptly and strictly holding to account all those who violate it. The people of Sudan should be able to exercise their right to peaceful protest without fearing for their lives.”- Ida Sawyer, deputy Africa director at Human Rights Watch.

World Press Freedom Day on 3rd May provided another occasion for human rights groups in Sudan to call for more press freedom and the immediate end to the repression of journalists. In a statement, the founding committee of the Sudanese Journalists Union (SJU) criticised the operation of the National Press and Publications Council as repressive. As reported by Radio Dabanga, the press council still grants or refuses to grant licences for newspapers, can still impose huge fines on publishing houses, and often hinders the establishment of new newspapers or restricts media outlets’ ability to ‘open up’ since the revolution.

In a statement, the International Federation of Journalists (IFJ) demanded the immediate release of four journalists who were arrested by security forces on 12th February 2021.

They are accused of “incitement of acts of violence, sabotage, and looting across the country". Just two days earlier, Hussein Khojaly, editor and owner of Alwan newspaper, Al Masaa Radio and satellite TV channel Omdurman, was accused of committing "crimes against the state" and detained.

“We condemn these repressive measures in the strongest terms and press the Sudanese government to release our colleagues immediately and without delay,”- Sudanese Journalists Union (SJU).

“The IFJ is deeply concerned over the increasing number of arrests of journalists for simply doing their job. We call on the Sudanese authorities to release all the imprisoned colleagues immediately."- IFJ General Secretary, Anthony Bellanger.

While the national interim constitution provides guarantees for the right to freedom of association, legislation governing the formation and operation of organisations – including the Voluntary and Humanitarian Work Act – curtails the free exercise of the right in several ways.

While the national interim constitution provides guarantees for the right to freedom of association, legislation governing the formation and operation of organisations – including the Voluntary and Humanitarian Work Act – curtails the free exercise of the right in several ways. The Act employs an extremely narrow definition of civil society organisations and restricts them to humanitarian activities. Registration is mandatory and must be renewed annually. The authorities enjoy wide discretionary powers, allowing them to reject requests to establish organisations as well as to dissolve them. In addition, any proposed activity must obtain special approval from the National Intelligence and Security Service. Organisations are also required to obtain government permission to solicit and receive funds. In practice, only pro-government organisations are allowed to work freely whereas independent organisations are subject to numerous restrictions and face harassment and intimidation. In 2015 for example, the government revoked the license of the Civic Forum, the Sudanese Writers Union, and the Mahmoud Mohammed Taha Centre on the basis that they violated their registration licences. In February 2016, the National Intelligence and Security Services raided the office of Training and Human Development, where they confiscated documents and other materials. Later on, eight activists from the organisation were detained and charged with crimes against the state.

The national interim constitution provides guarantees for the freedom of peaceful assembly but in practice the right is not respected in Sudan.

The national interim constitution provides guarantees for the freedom of peaceful assembly but in practice the right is not respected in Sudan. Legislation imposes severe penalties for any act that ‘is likely to breach the peace or public tranquillity’. Such vague wording deters people in the country from participating in protests and demonstrations. Long and exhaustive procedures are required to organise public gatherings and permission must be granted by the Minister of the Interior. When a protest does take place, Sudanese security services often respond by using excessive force. In February 2016, 15 female protestors were beaten by security forces and arrested. Moreover, two people were killed and dozens detained for months without charge, subjected to various forms of ill-treatment and put at risk of torture following a series of student protests in April 2016. The government accused the students of using violence and a 25-year old student, Asim Omer, was charged with murder after he participated in the protest.

Article 39 of the national interim constitution safeguards the freedom of expression, but the legal environment remains restricted. The Press and Publications Law (2009) provides the state with power through the Press Council to monitor and censor press content.

Article 39 of the national interim constitution safeguards the freedom of expression, but the legal environment remains restricted. The Press and Publications Law (2009) provides the state with power through the Press Council to monitor and censor press content. This may result in the closure of newspapers and heavy fines on all those who infringe upon regulations and instructions. For example, the government temporarily suspended Al-Jarida in January after it reported on alleged corruption within the government. Journalists are subject to continual attacks, harassment, arbitrary arrests and interrogations. The state vigorously monitors printed and online media content, while print publications are scrutinised before being distributed and all electronic content is checked before being broadcast. The National Telecommunications Corporation has blocked websites that violate norms of public morality.Defamation is a criminal offense under the penal code. A new Freedom of Access to Information Law was passed in January 2015 with provisions that detail 12 types of information that are restricted from being accessed by citizens, which effectively makes the legislation a secrecy bill that legalises government restrictions on information.