On the watchlist: LGBTQI+ EuroPride goes ahead at the last minute as journalists and LGBTQI+ activists attacked more

Smear campaigns against the media and CSOs continue more

Onslaught of attacks against CSOs and journalists continues more 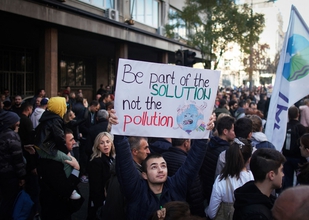 The Basic Public Prosecutor's Office in Novi Sad launched an investigation against 12 people who participated in the protests against the adoption of the General Urban Plan, which took place in July 2022. The Crime and Corruption Research Network (KRIK) was found guilty in a SLAPP case initiated by the former Head of the Security Intelligence Agency, now Minister of Internal Affairs, Bratislav Gašić. There were several smear campaigns against journalists and obstruction of their work.

The Basic Public Prosecutor's Office in Novi Sad launched an investigation against 12 people who participated in the protests against the adoption of the General Urban Plan, which took place in July 2022 (see previous update), accusing them of violent behaviour and assault on a policeman. The Prosecutor’s Office confirmed that no proceedings have been initiated against members of the private security who used violence against protesters, while environmental defenders confirmed that no action was taken by the Ombudsman or the Ministry of Internal Affairs regarding police violence at the same protest.

Environmental defenders were again subjected to pressure after they organised a new protest on 27th November 2022 in front of the Government of Serbia building in Belgrade against lithium mining. Protesters reported that they were asked for their IDs by police officers, who also demanded that some protesters be tested for alcohol and drugs.

On 1st December 2022, teachers in more than 47 cities in Serbia gathered to protest in support of a teacher from Trstenik who had earlier been subjected to violence by high school students. Labour unions reported that teachers in several schools have been under pressure by school directors after the protest announcement, additionally stating that they have received information that the educational inspectorate in Belgrade was checking schools for teachers who were absent.

On 17th October 2022, journalist Tamara Tankosić from Radio and Television of Serbia (RTS) was verbally and physically attacked while on assignment at the Faculty of Law at the University of Belgrade. She was followed and hit by an unknown person at the faculty’s front entrance and then threatened that she would be found after the event ended. The incident was reported to the police.

Journalist Jelena Obućina received worrying death threats from the tabloids “Alo” and “Informer”, after which she was exposed to further targeting on social media, including sexualised content.

The independent daily Danas received an anonymous message through an encrypted email service threatening a terrorist attack on their newsroom due to the paper’s editorial policy. The email, sent with the subject “Belgrade Charlie Hebdo”, in reference to the 2015 shooting in the offices of the French satirical newspaper, goes on to describe an attack on the Danas newsroom in graphic detail. The email explicitly singled out columnist Snežana Čongradin, who has been a target of threats, harassment and even physical assault in the past due to her work. In addition to Čongradin, the email lists the names of several other Danas columnists and independent journalists working for other outlets.

I am worried about the reported threats against the Danas Daily @OnlineDanas in Serbia. In Europe we must always stand up against violence & threats towards journalists.

As @Europarl_EN Standing Rapporteur for 🇷🇸, I shall always fight for free media & protection of journalists.

The Crime and Corruption Research Network (KRIK) was found guilty in a SLAPP case initiated by the former Head of the Security Intelligence Agency, now Minister of Internal Affairs, Bratislav Gašić. The lawsuit came after KRIK reported on a public trial by quoting a wiretapped conversation used as evidence against a criminal group, in which it can be heard that the group had ties with Gašić. Before publishing the text on its portal in April 2021, KRIK tried to reach Gašić for comment but with no success. He only answered after the text went online, but he refused to talk to journalists and filed a lawsuit in May 2021 demanding half a million RSD (over 4,000 EUR) in compensation for “damages to his honour and reputation“. KRIK stated that the verdict “was handed down in an unusually fast time frame for domestic trials - after only two hearings” and that “the judge banned most of the questions that the KRIK editor and their lawyer asked Gašić in court”. It was also reported that the judge in question, Nataša Petričević Milisavljević, has ties to Nikola Selaković, a high-ranking member of the Serbian Progressive Party and new Minister for Labour.

"This verdict shows that the government has taken over the courts to a large extent. It could be the beginning of an open trampling of the remaining free media.”- NUNS president Željko Bodrožić.

Journalists from the VOICE research portal were denied accreditation to cover the session of the local assembly in Bač, scheduled for 14th November 2022. The local parliament justified this decision, citing "limited space" and the impossibility of providing technical conditions because there will already be a television crew present.

The local Pešter TV from Tutin, South Serbia reported that local authorities were discriminating against them after not inviting them to report on events organised by the municipality for over two years. The broadcaster reported that their journalists did not receive any answers to questions they sent to local officials, nor did they accept calls to appear on their their programmes.

021.rs portal journalist Aleksandra Reves was prevented from reporting on the public session of the Commission for Plans organised in Sremski Karlovci. She was told that “allowing her to attend the public session would be a breach of the municipality rulebook”, as the session could only be attended by “citizens and associations who filed complaints to the spatial plan while allowing the journalist to attend would mean that all citizens could attend the session”.

Journalist Veran Matić and B92 and Insajder production teams have been targeted by the pro-ruling party tabloid “Informer” after it cited part of the book that was written by Zvezdan Jovanović, who was convicted for the assassination of former Serbian PM Zoran Đinđić. The Coalition for Free Media stated that this targeting was an attempt to discredit the work of Insajder and B92 journalists, who made a documentary series on the assassination of Đinđić, for which Veran Matić and Insajder journalist Brankica Stanković were under police protection for years.

Radio Television of Vojvodina Hungarian editorial office journalist Bagyi Ribar Renata was targeted by the State Secretary in the Ministry of Education and an official of the Alliance of Vojvodina Hungarians, Annemarie Vicsek. The attack came after Bagyi Ribar interviewed the party’s leader Balint Pastor and asked him questions on the controversial “Monument to innocent victims of 1944/45” and the list which contained convicted war criminals from WWII. Viczek stated in a Facebook comment that Bagyi Ribar was full of hatred “while talking to someone just because he was from the AVH”, and that Bagyi Ribar “took over the rhetoric of the Serbian opposition, with which hatred is spread and is constantly being talked about a list”.

Separately, a statement on 16th November 2022 announced that the portal of the European Fund for the Balkans and the European Movement in Serbia (EMINS), Vicinity Chronicles, is under hacker attacks. EMINS stated that the attacks are continuously repeated despite the measures taken and the regular maintenance of the website. The attacks are considered to be linked to the views expressed in the texts published on this portal by authors from all countries of the Western Balkans.