Paraguay: workers from various sectors take to the streets in Asunción more

Journalist asked to reveal her sources by Prosecutor's Office more

Protesters in Paraguay prevented from marching to the city centre more

Union's rights violated for its support of censored journalists more 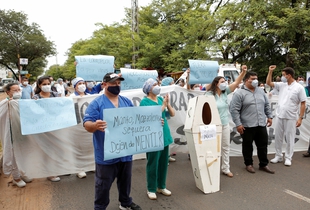 Medical staff protested in front of the Public Health Ministry and healthcare centres in different parts of the country. They called for equal pay for equal work and demanded wages consistent with working hours. The secretary-general of union Sindicato Nacional de Médicos (National Union of Physicians of Paraguay - SINAMED) said that for years there have been “physicians working 24 hours who receive the same salary as others working half that time”. Health professionals also demanded that the Abdo administration comply with an agreement to increase the budget for healthcare.

Similarly, teachers organised by the union Federación de Educadores del Paraguay (Federation of Paraguayan Educators - FEP) mobilised across the capital to demand compliance with a 2018 law establishing a gradual increase in educators’ salaries. They called for modifications to a bill which would temporarily prohibit wage increases for all civil servants, exempting educators from the salary freezes. On 12th August 2021, the Chamber of Deputies approved modifications to the bill, allowing salary increases for teachers and medical staff.

Rural workers and Indigenous peoples from 14 Paraguayan departments also travelled to the capital to demand compliance with an agreement reached in 2020 to promote investment in family and smallholder farming. In addition, the demonstrators rejected the eviction of over 800 Indigenous and rural communities. The protest, organised by the Coordinadora Nacional Interseccional (National Intersectoral Coordination - CNI), lasted for three days, with workers demonstrating in front of several public buildings in the centre of Asunción. Following a meeting with government representatives on 13th August 2021, leaders of the rural workers’ movement announced a new agreement with government regarding their demands.

Meanwhile truck drivers, who had already been striking since early August, set up a caravan on Costanera Avenue on 10th August to call for the approval and enactment of a law regulating freight rates. They claimed unregulated rates have affected driver’s wages, leaving them underpaid. After two weeks of the strike, on 19th August 2021, truck drivers and agribusiness companies reached an agreement to raise prices while an expert committee evaluates demands for fair freight rates.

In July 2021, civil society coalition Coordinadora de Derechos Humanos del Paraguay (Human Rights Coordination of Paraguay - Codehupy) sent an Amicus Curiae submission to the Supreme Court of Justice in a disciplinary case against lawyer and human rights defender Leticia Almada Paoli. The complaint against Almada Paoli was filed in 2019 by a judge who the lawyer had allegedly criticised.

Almada Paoli represented rural workers in Barbero Cué in a lawsuit related to land rights, which had already received a final ruling when judge Gloria Elizabeth Benítez Ramírez reportedly attempted to intervene. The rural workers then filed a complaint against the judge before the Jury for the Prosecution of Magistrates (JEM) for alleged poor performance of her duties. The judge, in turn, filed a complaint against Almada Paoli claiming the lawyer had offended her during a meeting. The case could result in the lawyer’s disbarment.

“The case in question goes beyond the individual interest of the parties and becomes a matter of public interest, on the basis that the protection of fundamental rights, and the freedom to defend them, as well as the ability of citizens to criticise their authorities, and especially the justice system, should not be curtailed under the application of a disciplinary regime, as these rights are superior to any internal regulation, or regulation of professional practice.”

After more than 30 years of fighting to recover their territories, the Xákmok Kásek community achieved an important advance in July 2021. On 14th July 2021, the government completed land titling procedures of 7,701 hectares acquired by the State in the name of the Xákmok Kásek community of the Sanapaná peoples, in the Presidente Hayes department. In 2010, the Inter-American Court of Human Rights had ruled in favour of the community, ordering the restitution of more than 10,700 hectares of their ancestral territory.

This is an important advance in the context of a recent wave of evictions of Indigenous and rural workers from their lands. At least 385 families were reportedly affected by evictions between May and July 2021. A representative of the UN Office of the High Commissioner for Human Rights (OHCHR) said that, despite their recommendations to halt this practice during the pandemic, several evictions against Indigenous, rural and urban communities had taken place in 2020 and 2021. Codehupy has proposed a bill to suspend the execution of evictions or forced evictions of urban and rural communities for the duration of the pandemic and for a period afterwards.