Tension between right to protest and COVID-19 measures rises more 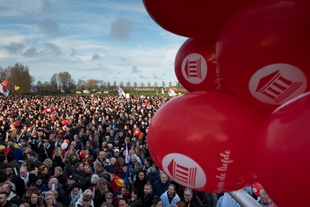 On 12th March 2022, around 18 Extinction Rebellion (XR) Netherlands activists were arrested in Amsterdam, where they had gathered to raise awareness on the urgency of the climate crisis ahead of the municipal elections. Separately one reporter was targeted by death threats and harassment, while another was obliged to broadcast from safe location due to violent threats.

Arrests at anti-Covid Freedom Convoy protest in the Dutch capital

On 12th February at least two people were reportedly arrestedas police intervened to stop a protest against COVID-19 measures in The Hague. The protest had been organised by the so-called “Freedom Convoy” that blocked traffic close to the Parliament in the Dutch capital with trucks, tractors and other vehicles. The main reason for protesting was the “dismantlement policy” implemented by Prime Minister Mark Rutte and all the COVID-19 measures introduced since the beginning of the pandemic. The demonstrators asked for a referendum with immediate effect on whether to prevent COVID-19 measures or similar ones from being introduced in the future.

On 12th March 2022, around 18 Extinction Rebellion (XR) Netherlands activists were arrested in Amsterdam, where they had gathered to raise awareness on the urgency of the climate crisis ahead of the municipal elections. For this purpose, the group had created a blockade on the Blauwbrug, disrupting traffic in that area of the city. The spokesperson of XR Netherlands reported that the activists were detained for four hours before being released. The police representative did not explain to the press why the protesters were arrested. On the same day, other protests organised by environmental activists with the same objective took place across the country, but no arrests were reported.

On 17th March 2022, the Dutch journalist Marcel Van Roosmalen was targeted with death threats via social media after he called an MP of the far-right party FvD “Putin's spy” during a radio programme - De Nieuws BV - two days before. As a reaction to his statement, his home address and the address of one of his children’s places of childcare were also shared online. He then received a Nazi flag at his home address. The journalist published the threats received and announced that he would report the episodes of harassment.

Journalist obliged to broadcast from safe location due to violent threats

On 1st May 2022, as a consequence of serious threats received, journalist and producer Özcan Akyol had to broadcast his radio show for NPO Radio 1 from another location. In fact, the journalist normally broadcasts from his home, but the police did not consider it a safe location for Akyol under the circumstances and requested that he temporarily move to a studio in Hilversum. The journalist has filed a report and investigations are ongoing. In the past, Akyol had already been targeted by death threats, including threats of sexual violence made against his child, and two men have been sentenced to a period in prison for two previous serious incidents.

Due to threats against columnist @OzcanAkyol, police asked him to temporarily change the broadcast location of his show @NPORadio1. RSF urges police to identify the perpetrators. Security of journalists is a major issue in the #Netherlands ranked 28th (-22 ranks) in new #RSFIndex pic.twitter.com/qwDLdNlzFT