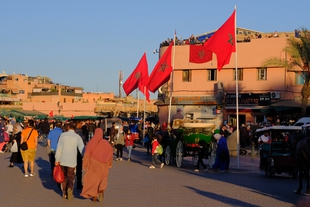 As in many parts of the world, in early 2020 Morocco adopted a state of health emergency to fight the COVID-19 pandemic. However, with the state of emergency came restrictions on freedom of expression, including imprisonment and fines for anyone who contravenes the health emergency decree, incites others to contravene the decree through speech or threats uttered in a public space or in meetings, written or printed materials, photos, posters, audiovisual or electronic communications, or any other means. In addition, the publication and distribution of print newspapers was suspended during the pandemic. The Council of Government also approved Bill 22-20 which aims to censor expression on social media, in particular, criminalising calls to boycott commercial products. During the pandemic, 110 citizens were detained for legitimately expressing their views. Police also arrested 450 individuals for breaking the public health emergency law and 56 for publishing false information on COVID-19.

As in many parts of the world, in early 2020 Morocco adopted a state of health emergency to fight the COVID-19 pandemic. The emergency was declared in March 2020 and extended a few times, with the latest extension until 10th July 2020, where there will be a gradual easing of confinement measures. With the state of emergency came restrictions on civic space, including imprisonment and fines (300 to 1,300 dirhams) for anyone who contravenes the health emergency decree, incites others to contravene the decree through speech or threats uttered in a public space or in meetings, written or printed materials, photos, posters, audiovisual or electronic communications, or any other means. In addition, the Minister of Culture, Youth and Sports announced the suspension of the publication and distribution of print newspapers.

The government is accused of attempting to take advantage of the coronavirus crisis to pass a bill that violates the Constitution and restricts freedom of speech.

On 19th March 2020 the Council of Government approved Bill 22-20 which deals with the use of social networks, in particular, criminalising calls to boycott commercial products. The bill has been criticised by civil society groups and an online petition was launched against it. For instance, Article 14 of the pending legislation stipulates that anyone who calls for a boycott against a specific product or service in public or through social networks, which undermines public order, should receive a prison sentence ranging between six months and three years and a fine of between MAD 5,000 and MAD 50,000 ($500 to $5,000).

In addition, many NGOs noted the bill was unconstitutional as it was approved by the Council of Government, without being published by the General Secretariat, as Article 78 of the Constitution requires. Rather, the bill was leaked on social media. More than 30 NGOs referred to it as a new attempt to attack and restrict freedom of expression on social media. In an issued statement, they have also called for a complete abandonment of Bill 22-20 and for the “respect of freedom of expression and the right of access to information, especially during the health crisis”. They are also against “the privatisation of internet censorship or any other measure that could affect internet neutrality” and reject “any infringement of consumer rights, in particular calling for the boycott”.

In a positive step, an online platform was established by the National Council for Human Rights (CNDH) which is dedicated to freedom of opinion and expression and its limits and to facilitate debates between experts, citizens and various other stakeholders. Although this platform was established, calls from NGOs about Bill 22-20 and respect for freedom of expression, remain.

While the effectiveness of the platform is yet to be determined, the practice of restricting freedom of expression has long been documented by several civil society groups. As Amnesty International notes:

“The Moroccan authorities have increased their intolerance towards those daring to express their views freely. At least 10 individuals including one journalist and two rappers were arrested and sentenced to prison sentences in relation to their legitimate exercise of their right to freedom of expression online between November 2019 and January 2020”.

According to the Moroccan Association for Human Rights (AMDH), as of March 2020, the number of prisoners detained for legitimately expressing their views across the country reached 110. On 28th March 2020, the secretary general of the presidency of the public prosecutor's office reported that the police had arrested 450 individuals for breaking the public health emergency law and 56 for publishing false information on COVID-19. The situation of those detained and imprisoned are being monitored by rights groups.

“The Moroccan authorities should be prompted by the grim prospect of COVID-19 spreading in prisons to release the dozens of detainees held simply for expressing their views or for exercising their right to protest. These peaceful individuals should never have been imprisoned in the first place.”- Heba Morayef, Amnesty International’s MENA Regional Director.

However, the practic of detaining journalists continues.

"This issue is feared to be a new link in the series of accusations of an ethical nature, which the Moroccan state pursues in targeting human rights activists and independent journalists, critics, opponents or those expressing their positions contrary to the authority and some of its institutions."

NSO Group, the Israeli company marketing its technology in the fight against COVID-19, contributed to a sustained campaign by the government of Morocco to spy on Moroccan journalist Omar Radi, a new investigation by @amnesty reveals:

On13th April 2020 an ‘outing’ campaign began where fake accounts were created on same-sex dating apps for the purpose of sharing the profile of men on these apps on social media and as a result ‘outing’ them. In addition, the pictures shared on social media were accompanied by insulting captions and threats towards these men based on their perceived sexual orientation. Homosexuality is illegal in Morocco and thus the campaign has had devastating impacts on the people who have been outed on social media. Police told Human Rights Watch (HRW) that the matter is being investigated under “incitement to hatred and discrimination.” HRW called for the repeal of Morocco’s anti-LGBTI laws.

“The consequences of ‘outing’ can be detrimental to LGBT people’s livelihoods, safety, and mental health. The Moroccan authorities should immediately step in to protect LGBT people’s privacy and repeal anti-LGBT laws that can only fuel this homophobic behavior,”- Graeme Reid, lesbian, gay, bisexual, and transgender (LGBT) rights director at Human Rights Watch.

In a case documented by HRW, in April 2020 a young woman performed a 15 second video on social media platform TikTok about a local security figure who has been rebuking people who are break lockdown rules. The video was meant to be funny. However a few days later authorities arrested the women and she was sentenced to two months’ detention. She was charged under article 382 of the penal codeprohibiting “unauthorised public wearing of an official uniform.”

A few protests took place during the reporting period: