Iraqi Kurdistan: Ongoing retaliation against anyone who criticises the governing authorities more

In conflict-ridden Iraq, six journalists killed and many injured in recent months more 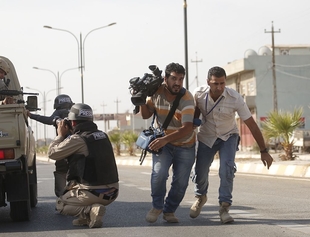 Iraqi Parliament’s media department prevented a group of journalists from entering the parliament building to cover the election of the President of the Republic; The Gulf Centre for Human Rights (GCHR) launched a report entitled “Patterns of Torture in Iraq” which focuses on the main patterns of torture in Iraq since the beginning of the widespread peaceful demonstrations that erupted across the country on 1st October 2019; Human Rights Watch reported on the push to silence LGBTIQ+ rights in the Kurdistan region of Iraq.

On 13th October 2022, the Iraqi Observatory for Human Rights (IOHR) reported that the Iraqi Parliament’s media department prevented a group of journalists from entering the parliament building to cover the election of the President of the Republic. According to the director of the Al-Mayadeen channel, Abdullah Badran, when he and a group of other journalists arrived at the House of Representatives, they were informed that entry was restricted to certain journalists only. Muhammad Imad, a correspondent of Baghdad Agency today, was also banned from entering. He said: "I sent an authorisation in my name to enter the session, but the response was: (We apologize, you cannot enter for today)". When he queried the reason behind this refusal, Imad was informed by a member of the media department that attendance was restricted to a specific group of local media.

On 5th October 2022, the Gulf Centre for Human Rights (GCHR) launched a report entitled “Patterns of Torture in Iraq” which focuses on the main patterns of torture in Iraq since the beginning of the widespread peaceful demonstrations that erupted across the country on 1st October 2019. The report was launched at an online event on the margins of the United Nations Human Rights Council’s 51st session, co-hosted by Amnesty International and IOHR.

Based on an analysis of the Iraqi legal system’s shortcomings in preventing, investigating and remedying the perpetration of torture, along with witness testimonies and individual case studies documented by GCHR, the key patterns of torture that emerge are: the systematic perpetration of torture in places of detention; the fostering of a culture of impunity through a reliance on forced confessions and a lack of effective investigations into allegations of torture; and the targeting of women and the LGBTIQ+ community. The report also contains a list of practical and urgent recommendations to the Government of Iraq in order to end the cycle of impunity currently enjoyed by perpetrators of torture.

This report by GCHR adds to and builds upon the recent spotlight that has been cast by UN reporting mechanisms on grave human rights abuses in Iraq. In the first half of 2022, Iraq came under the scrutiny of the UN Committee Against Torture and the UN Human Rights Committee which concluded that torture remains a widespread and systematic practice by state and non-state actors in Iraq that takes place against a backdrop of socio-political turmoil characterised by the oppression of human rights defenders, members of wider civil society and minority groups. At the launch event, GCHR’s Executive Director Khalid Ibrahim said:

“We have two chronic problems in Iraq, which is my country. The first one is that torture is systematic in some places of detention… Then you have another problem with impunity.” Furthermore, he added, the “judiciary is not up to international standards of due process and fair trial.” He said, “Authorities should implement a very clear legal framework that will help end torture and gain the trust of the people.” He added, “No circumstances whatsoever will justify torture.”

At the event, IOHR Executive Director Mustafa Sadoon pointed out that, “We think that all confessions taking place in Iraq are extracted under torture, and none of them are real.” He noted that most people would admit to anything under torture. IOHR has documented numerous violations in prisons, including torture, and monitors must wait weeks before they are granted permission to carry out inspections, if at all.

On 7th September 2022, Human Rights Watch reported on the push to silence LGBTIQ+ rights in the Kurdistan region of Iraq. Just several days earlier, on 4th September, members of the Kurdistan Regional Government in Iraq proposed a bill that, if passed, would punish any individual or group who advocates for the rights of lesbian, gay, bisexual and transgender (LGBT) people. Under the “Bill on the Prohibition of Promoting Homosexuality,” anyone who advocates for LGBT rights or “promotes homosexuality” would face imprisonment of up to one year, and a fine of up to five million dinars (US$ 3,430). The bill would also suspend, for up to one month, the licences of media companies and civil society organisations that “promote homosexuality.” According to Human Rights Watch, the proposed bill comes at a time of heightened crackdown on freedom of expression and freedom of assembly in the Kurdistan region of Iraq and, if passed, would further endanger freedom of expression in this region by eradicating discussion around gender and sexuality.

The Iraqi Constitution safeguards the freedom of peaceful assembly and Provisional Order 19 of 2003 provides a framework regulation for demonstrations.

The Iraqi Constitution safeguards the freedom of peaceful assembly and Provisional Order 19 of 2003 provides a framework regulation for demonstrations. Organisers of public gatherings are required to obtain prior approval from government authorities at least 24 hours before the event. Government authorities can also impose place and time restrictions, while justifications, such as national security issues and the need to protect people from terrorist attacks, have been continuously used to postpone, cancel, or ban demonstrations. In practice the right to peaceful assembly is regularly violated, with security forces using excessive force to disperse and prevent protests. In 2016, thousands peacefully protested about the lack of state services and corruption. During one demonstration, at least five people were killed by security forces using an unnecessary amount of force to disperse the protests.

The Iraqi Constitution guarantees freedom of expression. However, conditions for the press and media workers are particularly harsh

The Iraqi Constitution guarantees freedom of expression. However, conditions for the press and media workers are particularly harsh. The Publications Law prescribes prison terms for insulting the government, and libel and defamation are also criminal offences. This legislation is frequently used by the authorities to prevent journalists from reporting on major issues of public interest such as corruption cases. The Communications and Media Commission (CMC) is the primary body responsible for regulating broadcast media, and has released guidelines for media that place arbitrary restrictions on coverage. Under those guidelines, the authorities suspended Al Jazeera's license to operate in the country. Journalists operate in an extremely dangerous environment, facing violence and harassment from state and non-state actors. Since 1992, 174 journalists have been killed. The country also lacks national legislation guaranteeing access to information, although the government of the Kurdistan Region adopted the Right to Access Information Law, No. 11 of 2013. The Internet has also been restricted in the country as authorities slowed down the public’s connection on at least two occasions for unjustified reasons.