#FixTheCountry protests; two people killed in protest against the killing of a social activist more

Journalist killed amid deteriorating climate for the safety of journalists more

Journalists intimidated and detained for speaking out in Ghana more

Concern over calls to shut social media during elections more 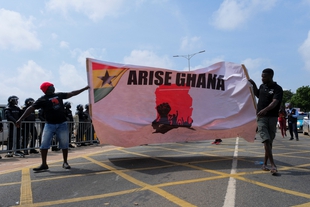 Ghana dropped 30 places globally in Reporter Without Borders' 2022 World Press Freedom Index, reflecting a significant deterioration of press freedom in the country. Ghana now occupies the 60th place in the 2022 global ranking, down from the 30th place; and the 10th place on the continent, down from the 3rd place. Concerns mentioned by RSF include the safety of journalists with physical attacks on journalists and death threats issued by officials. The Media Foundation for West Africa's freedom of expression Monitor recorded 11 violations in the first quarter of 2022 (January to March 2022) in Ghana, the highest number of violations recorded in Ghana in a single quarter in the past three years, while also outpacing other countries in West Africa.

Ghana dropped 30 places globally in Reporter Without Borders' 2022 World Press Freedom Index, reflecting a significant deterioration of press freedom in the country. Ghana now occupies the 60th place in the 2022 global ranking, down from 30th place; and the 10th place on the continent, down from 3rd place. Concerns mentioned by RSF include the safety of journalists, with physical attacks on journalists and  threats issued by officials. The Media Foundation for West Africa's freedom of expression Monitor recorded 11 violations in the first quarter of 2022 (January to March 2022) in Ghana, the highest number of violations recorded in Ghana in a single quarter in the past three years, while also outpacing other countries in West Africa.

On 26th August 2022, the Kumasi Traditional Council in Ashanti Region ordered radio station Oyerepa FM to suspend its operations from 26th August 2022, as reported by MFWA. The Council accuses the radio station of having served as a platform for politician and former presidential candidate Akwasi Addai Odike to verbally attack the traditional authority. The action referred to the broadcast of an interview with Odike in which he accused the traditional authorities of Ashanti Region of being unconcerned about illegal mining, which is destroying their forests, lands and water, and even threatened to organise a massive protest. The management of Oyerepa FM was subsequently summoned and directed to suspend their operations, despite having offered public apologies. Three days later, on 29th August 2022, the Council granted the radio station permission to resume its operations after mediation efforts.

Violence against, physical assault of journalists

On 16th May 2022, three individuals, identified by the victims as supporters of the ruling New Patriotic Party (NPP), forced their way into the offices of radio station Benya FM in Elmina, Central Region, physically attacked host Eric Blessing Eshun (also known as Osofo Blessing) and producer Emmanuel Egyirfah (also known as Nana Gyefo) during a live talk show on fishing premix fuel distribution issues and destroyed equipment. Egyirfah's arm was twisted when he attempted to lock the door against the perpetrators, while Eshun was kicked and punched, leading the presenter to fall unconscious. Programme director Usman Kwaku Dawood told Reporters Without Borders (RSF) that the assailants were not satisfied with the way the radio station was covering topics such as the government's mismanagement of the fishing industry in the region of Elmina. The attack forced the radio station off-air for four days.

Three people were arrested for the attack and reportedly charged with assault, unlawful entry, conspiracy to commit a crime, stealing and causing unlawful damage. The three suspects were granted bail by the Cape Coast Circuit Court.

In another incident on 2nd May 2022, NPP supporters accosted and pushed journalist for Ghana News Agency (GNA), Prince Acquah, to the ground in Ajumako, Central Region. The attack happened when the assailants noticed Acquah filming an altercation between NPP supporters.

On 24th May 2022, police briefly detained radio journalist Noah Narh Dameh, who works as the deputy station coordinator for community radio station Radio Ada, located in the Greater Accra Region, following a defamation petition by Elektrochem Ghana Limited. He was later charged by the Tema Magistrate's Court with 'publishing of false news'. The charges relate to a Facebook post in which Dameh claims that indigenous salt miners are being sidelined by some chiefs in Ada and Daniel McKorley, the executive of Elektrochem Ghana, was granted a controversial concession to mine salt on an industrial scale in the Songhor Lagoon in Ada. The Facebook post included a picture of McKorley and of citizen Benjamin Anim in handcuffs at Dzodze Hospital. According to MFWA, the journalist was invited by police for questioning on 24th May 2022, and was only released after nearly six hours.

As reported previously on the Monitor, the offices of Radio Ada were broken into and vandalised in January 2022, with perpetrators threatening to return if Radio Ada FM did not cease reporting on the recently granted salt mining contract.

According to Reporters Without Borders (RSF), journalist for Metro TV, Derrick Adotey, and his cameraman were briefly detained on 17th May 2022, after they had filmed a document containing the list of charges brought against #FixTheCountry protest convener and activist Oliver Barker-Vormawor, who was arrested on 11th February 2022.

On 28th and 29th June 2022, protests organised by political pressure group Arise Ghana took place in Accra to denounce the high cost of living, spiralling food and fuel prices, high inflation, a recently approved levy on electronic money transfers and other levies amid an economic downturn. Although the protests started peacefully, they turned violent on 28th June 2022 with clashes between police and protesters. According to news reports, police used tear gas, rubber bullets and water cannon to disperse protesters. At least 29 protesters were arrested on 28th June 2022, while dozens of people, including 15 police officers, were injured. The protests on 29th June 2022 were peaceful without major incidents.

On 13th June 2022, police reportedly used tear gas to disperse a protest of students from the Islamic Senior High School in Kumasi, Ashanti Region, leading to dozens of students sustaining injuries requiring hospital treatment. According to news reports, police also fired warning shots into the air. The students blocked the road in front of their school in protest over frequent road accidents involving pedestrians. An investigation was opened into the incident, resulting in disciplinary action against three police officers.

In the report ""We Deserve Protection". Anti-LGBTIQ Legislation and Violence in Ghana", published on 29th August 2022, civil society group OutRight Action International has outlined the impact of the draconian anti-LGBTIQ+ law, introduced to the National Assembly in June 2021. The draft law has created "a hostile and dangerous situation for sexual and gender minorities in Ghana, leading to multiple forms of human rights violations without redress". These right violations include mob attacks, physical violence, arbitrary arrests, blackmail, online harassment, verbal harassment, gang rape and other acts of sexual violence, conversion practices, forced evictions and homelessness, employment discrimination and robbery.