CSOs team up to support refugees from Ukraine more 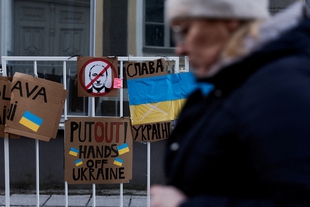 During April 2022, several protests were staged at different embassies in support of Ukraine. Additionally, three Estonian NGOs – the Estonian Refugee Council, Mondo and the Ukrainian Cultural Center – have been engaged in supporting Ukrainian people affected by conflicts since 2014 by providing food, medicines and hygiene items, clothes and shoes. After the war broke out in February 2022, the three NGOs launched the “For Ukraine!” initiative to help residents close to the Ukrainian front and other vulnerable groups.

In July 2022, a new coalition government took office, replacing a minority government which had been in place since early June. Former prime minister Kaja Kallas was confirmed to lead this second government which will be in office for eight months, until the next parliamentary elections set to take place in March 2023. The new government is composed of 15 ministers, five from each party.

“Inimõigused” (“Human Rights”), the first collection covering the area of human rights in Estonian, was published at the initiative of the Office of the Chancellor of Justice (the Estonian national human rights institution). This interdisciplinary book consisting of 26 chapters provides an overview of the theory and practice of the protection of human rights in Estonia. The 33 authors of the book include advisers to the Chancellor of Justice, researchers from Estonian and foreign universities, judges, lawyers, and experts from several state institutions and NGOs.

Chapter 8 “Human rights and NGOs”, authored by Helen Talalaev, outlines the importance of civil society in building a system for the protection of human rights in Estonia. The author praises the proactivity and resilience of CSOs in reacting to challenges and crisis and celebrates the achievements obtained by CSOs in the last few decades. The author also reflects on recent warning signs for civic space in Estonia – especially in connection with the work of extreme conservative NGOs and the arrival of conservative parties in government. On the one hand, this has led to greater cooperation between human rights NGOs and a willingness on the part of people to stand up for an open society and to demonstrate. On the other hand, value conflicts have also arisen among NGOs, which have brought controversy to civil society and thereby weakened it.

The 2021 Civic Society Organisation Sustainability Index for Estonia, financed by USAID, was published in September 2022. According to the report, while the overall sustainability of the CSO sector remained stable, progress was observed as CSOs’ role in policy-making processes was further institutionalised during the year. Civil society has proven to be capable and trustworthy, helping both the state and those in need by organising campaigns, collecting donations and volunteering. In general, Estonian civic space remains very open with a supportive legal environment for CSOs and growing financial and organisational capacity within the sector.

Three Estonian NGOs – the Estonian Refugee Council, Mondo and the Ukrainian Cultural Center– have been engaged in supporting Ukrainian people affected by conflicts since 2014 by providing food, medicines and hygiene items, clothes and shoes. After the war broke out in February 2022, the three NGOs launched the “For Ukraine!” initiative to help residents close to the Ukrainian front and other vulnerable groups. Together, they have been collecting donations to provide humanitarian and financial assistance inside Ukraine, organise the evacuation of Ukrainians and support Ukrainian refugees in Estonia.

Furthermore, the Estonian Refugee Council and the Estonian Human Rights Centre are cooperating with the UN Refugee Agency to increase the security of Ukrainian refugees in Estonia. Special attention is being given to the well-being of vulnerable groups in Estonia: children, people with additional needs and refugees belonging to other minority groups.

“UNHCR have had a very close partnership with the Estonian Human Rights Centre for years to assist and support refugees in Estonia. I’m happy that we have now agreed to strengthen and expand this partnership further in light of the many refugees from Ukraine who now have sought refuge and protection here. The work and outreach of the Estonian Human Rights Centre will ensure that important support can be provided to the refugees,” Henrik M. Nordentoft, UNHCR’s Representative to the Nordic and Baltic countries said.

Victory in court: students can inform schools of sexual harassment

The Estonian Human Rights Centre has supported a young athlete named Miia in court, a minor who confidentially reported sexual harassment by her coach to the head of her school. The coach filed a defamation complaint against her together with a claim for compensation for damages. On 9th September 2022, a court ruled in Miia’s favour after finding that the so-called “defamation” provisions do not apply to the reporting of harassment to the head of the school.

Estonia has the second-freest internet in the world

According to the Freedom on the Net 2022 report by Freedom House, Estonia has the second-freest internet in the world after Iceland. The report notes that on 25th February 2022, a day after Russia attacked Ukraine, the Estonian Consumer Protection and Technical Regulatory Authority “ordered telecommunications operators to restrict online broadcasting of six pro-Kremlin TV channels, including RTR-Planeta, RTVI, Rossiya 24, REN TV, NTV Mir, and PBK, for twelve months in an effort to limit Russian war propaganda.” In March 2022, the authority ordered the blocking of another TV channel, RBK (RBC TV), seven websites (ntv.ru, ren.tv, 5-tv.ru, 78.ru, 1tv.com, lenta.ru, and tass.ru.) and 12 internet channels, whose “content incites to commit offences towards national security and national defence, to the detriment of the security of society”. The blocking of the Russian state-linked websites resulted in a score change in the ‘limits of content’ category of the report. In 2021, Estonia scored five out of six, while in 2022 it scored four out of six.

“Estonia, known the world over as one of the most advanced digital societies, enjoys good connectivity and high rates of access, few state-imposed restrictions on online content and robust safeguards for human rights online,” said Hille Hinsberg, an Estonian digital governance expert, who served as one of the national rapporteurs for this report.

During April 2022, several protests were staged at different embassies in support of Ukraine. In one protest, which took place outside the Russian Embassy, protesters spoke up against the rape of women and children in Ukraine. Two other protests took place in front of the German and Hungarian embassies.