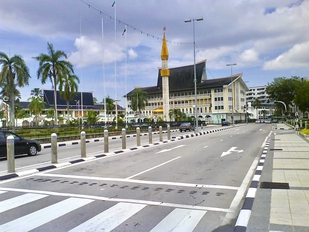 The state of civic space in Brunei was downgraded by the CIVICUS Monitor to ‘repressed’ in December 2019 and there has been no documented progress on improving fundamental freedoms. According to Freedom House, freedoms of the expression and assembly are significantly restricted and online speech is monitored by authorities.

The state of civic space in Brunei was downgraded by the CIVICUS Monitor to ‘repressed’ in December 2019 and there has been no documented progress on improving fundamental freedoms.

Brunei is an absolute monarchy in which the Sultan exercises executive power. The Sultan continues to wield power under a long-standing state of emergency imposed in 1984.

The government has made no effort to address recommendations by the UN Human Rights Council in Geneva in 2019. During the UN review, Norway, Germany, Australia, Portugal and the US called on the Brunei government to review its legislation to effectively guarantee the rights to freedom of expression and association, including amending or repealing the Sedition Act, which criminalises, among other things, acts criticising the Sultan or the royal family.

States also called on the Brunei government to review the Local Newspapers Order (Portugal), lift the state of emergency (France, Spain, UK) and to put an end to censorship of the media (Czech Republic and Slovenia).

There are no elected representatives at the national level. According to Freedom House, freedoms of the expression and assembly are significantly restricted and online speech is monitored by authorities. It is rated ‘Not Free’ by the organisation with a Global Freedom score of 28 out of a 100.

Reporters Without Borders (RSF) which ranked Brunei at 154 out of 180 countries in its press freedom index reported that self-censorship is the rule for journalists.

Officials may close newspapers without cause and fine and imprison journalists for up to three years for reporting deemed “false and malicious.” Brunei’s only television station is state-run. The country’s main English-language daily newspaper, the Borneo Bulletin, is controlled by the Sultan’s family and its journalists often practise self-censorship. An online outlet, the Scoop, launched in 2017, contains somewhat independent coverage of Brunei society and politics.

An informant system is part of the government’s internal security apparatus to monitor suspected dissidents, religious minorities, or those accused of crimes. Persons who have published comments on social media critical of government policy, both on public blogs and personal sites such as Facebook, reported that authorities monitored their content.

Freedom House stated that academic freedom is respected to some extent, although institutions must seek approval from authorities to host visiting scholars, public lectures and conferences. Scholars reportedly practie self-censorship or release their work under pseudonyms in overseas publications.

Long-standing state of emergency laws continue to restrict freedom of assembly. No more than ten people can assemble for any purpose without a permit, and these laws are frequently enforced. Police may disband an unofficial assembly of five or more persons deemed likely to cause a disturbance of the peace. Permits require the approval of the Minister of Home Affairs. The government routinely issued permits for annual events but has in recent years occasionally used its authority to disrupt political gatherings. Organisers of events on sensitive topics tend to hold meetings in private rather than apply for permits or practise self-censorship at public events.

The law does not provide for freedom of association. The law requires formal groups to register with the Registrar of Societies and provide regular reports on membership and finances. Applicants have been subject to background checks, and proposed organisations have been subject to naming requirements. Some new organisations reported delaying their registration applications after receiving advice that the process would be difficult.