Attacks against the media and journalists remain a concern more 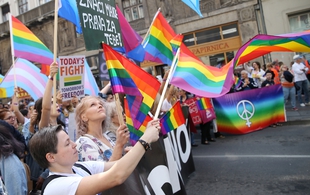 On 31st May 2022, the local police administration of the Republika Srpska entity decided to impose limitations to the annual march marking White Ribbon Day for war victims in Prijedor in order to allegedly “reduce the danger to the safety of people and property and the danger of disturbing public order and peace”. Protests also took place on the cost of living crisis. On 25th July 2022, the third BiH Pride March was held without any incidents reported. However, as noted by an analysis by the Media.ba journalist Marija Arnautović, hate speech, insults and vilification in the online space were strongly present during and after the March.

According to an analysis by Balkan Insight published on 13th April 2022, US right-wing extremist Robert Rundo has managed to forge ties with individuals and organisations located in Bosnia and Herzegovina.

According to the Pink Annual Report on the State of Human Rights of LGBTI Persons in Bosnia and Herzegovina, published by the civil society organisation Sarajevo Open Centre (SOC) on 23rd May 2022, 2021 was marked by restrictions in the area of freedom of peaceful assembly due to the COVID-19 restrictions. In addition to that, it is reported that a common legal framework is still missing and that in many cases CSOs were not involved in the political processes aiming at regulating this area.

On 25th May 2022, the Basic Court in Brcko converted to a fine the six month sentence of Srdjan Letic, leader of the pro-Russian Sveti Georgije Loncari organisation, who has been convicted multiple times and caused severe bodily injuries to Cvijetin Sofrenovic.

According to the report “Indicators of the level of media freedoms and safety of journalists in BiH 2021”, published by safejournalists.net on 16th June 2022, 26 cases of attacks, threats and pressures on journalists and media outlets in BiH were registered in the previous year, often coming from representatives of institutions from different levels of government and often targeting women. Two cases of Strategic Lawsuits against Public Participation (SLAPPs) have also been registered. According to the Coalition For Women In Journalism (CFWIJ) 2021 Annual Press Freedom Report published in June 2022, the year 2021 saw a global increase in major violations against women journalists by 16 per cent as compared to the previous year. In Bosnia and Herzegovina, two cases of threats and attacks against female journalists were reported throughout the year.

On 15th June 2022, the car of Republic of Srpska Radio Television’s (RTRS) journalist Nataša Miljanović-Zubac was set on fire while parked at her home in the town of Trebinje. The journalist recently received online insults and threats from commenters which included local politicians and had been targeted by politicians in the past. Miljanović-Zubac believes that the attack may be retaliation for her frequent coverage of corruption, organised crime, smuggling and drug trafficking in the region.

On 28th June 2022, BIRN Bosnian journalist Nermina Kuloglija, together with her Turkish colleague Hamdi Fırat Büyük, received a series of intimidating messages and calls, including death threats, coming from both Bosnia and Herzegovina and Turkey. These acts of intimidation are linked with their recent investigation of Bosnia and Herzegovina’s branches of the Grey Wolves organisation, which is affiliated with the far-right Nationalist Movement Party, MHP, an ally of Turkish President Recep Tayyip Erdoğan’s ruling party.

On 25th July 2022, the third BiH Pride March was held without any incidents reported. However, as noted by an analysis by the Media.ba journalist Marija Arnautović, hate speech, insults and vilification in the online space were strongly present during and after the March. These digital rights violations were confirmed by another analysis published on Balkan Insight, which also added that these attacks have come from high-level politicians.