'Gag Law' under reconsideration, legal and online harassment of journalists

On 15th February 2022, the Congress resumed its meetings to discuss Spain’s controversial Citizens’ Security Law. As it stands now, the reform would eliminate or modify some of the most contentious parts of the Citizens' Security Law, including the imposition of fines of up to 600 Euros for organising spontaneous demonstrations and the requirement for citizens to obtain permission before taking and publishing images or videos of the police. Shortly after the announcement of reform, tens of thousands of police officers and their supporters, which include right-wing parties such as People's Party (PP), Vox and Cuidadanos, took to the streets to oppose the reform. Civil society organisations believe that the reform does not go far enough. Under the platform No Somos Delito, a broad coalition of more than 100 associations and social movements claim that the most harmful elements of the Citizens' Security Law remain unchanged. , it does not prohibit racial profiling practices by the police, nor does it challenge the presumption of veracity for police officers, which enables them to act with relative impunity. The draft reform also falls short of taking a stance on the right to freedom of information. While the provision has been modified somewhat, the act of taking pictures or videos of police officers at work will still be sanctioned in cases where "it entails a certain danger", which is left up to the police to decide. Read more  |  Read in Spanish 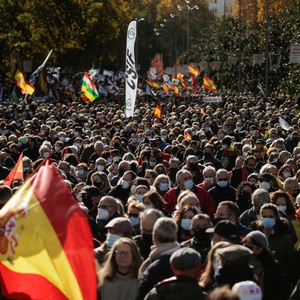 The brutal killing of Samuel Luiz, a young gay man in the city of A Coruña in Galicia sparked nationwide protests. In Madrid, clashes erupted between protesters and the police, with police using excessive force against protesters as graphic images shared on Twitter show police attacking protesters with batons. There are have been several court rulings. In a case with international significance, the Constitutional Court ruled on 14th July 2021 that the lockdown imposed by the government between 14th March and 21st June 2020 was illegal. On 2nd July 2021, the Supreme Court confirmed the previous decision of the Superior Court of Justice of Madrid against Isabel Serra, which sentenced her to 19 months in prison for allegedly insulting and throwing objects at policemen during protests against an eviction in the Lavapiés neighborhood in 2014. On 18th August 2021, Spain’s Supreme Court rejected the introduction of a Digital COVID Certificate to access restaurants, bars, museums and other public places. Read more  |  Read in Spanish 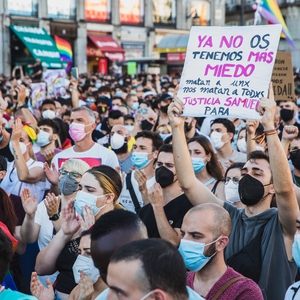 Foreseeing demonstrations devoted to International Women's Day, authorities in Madrid prohibited protests for the 7th and 8th March 2021 for public health safety reasons, banning all 104 requests. Human rights organisations labelled this move "disproportionate". Protests erupted across Spain over the recent arrest of the Spanish rapper known as Pablo Hasél (Pablo Rivadulla). The musician was detained and given a nine-month prison sentence for glorifying the terrorist groups ETA and GRAPO in 2018 and insulting the Crown and state institutions on social media. More than 100 people were arrested, with police using excessive force during protests. It has also been reported that several journalists covering the protest facec violence from police. Following the events around the arrest of Pablo Hasél, the Council of Europe Commissioner for Human Rights, Dunja Mijatović, wrote a letter to the Spanish Minister of Justice, inviting Spanish authorities to strengthen existing safeguards to the right to freedom of expression and introduce amendments to the Criminal Code. Read more  |  Read in Spanish 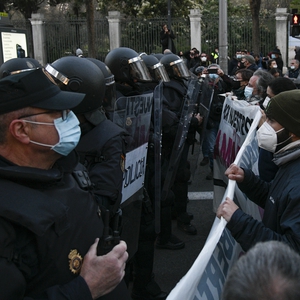 During this period, protests were staged over labour rights due to the impact of the COVID-19 pandemic on several sectors- including the hospitality and food services industry. In a concerning development, two rulings made by the Constitutional Court took a restrictive interpretation on the right to freedom of expression. In a separate development, a Spanish Court condemned CTXT- a Spanish online media outlet - for breaching the “right to honour” of a famous actor due to a news article published in 2016. The court went further by preventing the outlet from publishing any further information relating to the news that resulted in the legal lawsuit, thus raising concerns of over the right to freedom of information. Read more  |  Read in Spanish 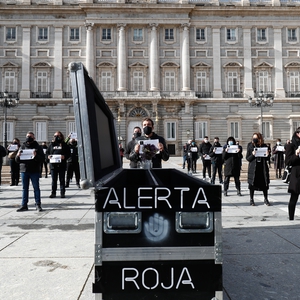 During the second wave of the pandemic, several protests broke out throughout Europe against COVID-19 measures introduced. Following the announcement of tougher measures, protests occurred in several big cities such as Madrid, Barcelona and Valencia. These protests have turned violent and, in some cases, have led to the arrest of protesters. In a separate development, journalists have reported that the Ministry of Interior is preventing them from taking photos of the arrival of refugees in the Canary Islands and thereby making it challenging to inform the public about current developments. In a concerning development, the Interior Committee of the Congress approved Podemos’ proposal to ban hate speech on social media. The initiative has been met with reluctance among opposition parties, jurists and freedom of expression experts. The proposal obliges digital platforms to police hate speech and invites them to censor online content.
Read more  |  Read in Spanish 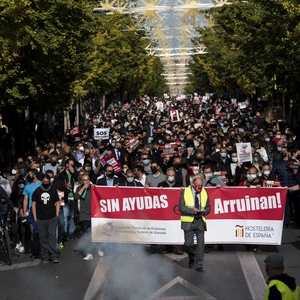 Catalan independence campaigners are suspected to have been targeted by government services using spyware, which is allegedly only sold to governments for the purpose of surveilling criminals and terrorists. However the Spanish government has denied all allegations. On the five- year anniversary of the controversial Citizen Safety Law, more popularly known as the “Gag Law”, NGOs called for the revision of the law which has been criticised for impeding freedom of peaceful assembly and freedom of expression. The law has been used during the lockdown to record a number of fines against citizens. In a concerning development, during the pandemic media professionals have criticised the Spanish government for filtering questions during telematic appearances, leaving many journalists' questions unanswered. Journalists also continued to face attacks from far-right groups, including the Fox party. 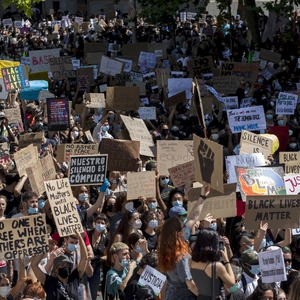 The so called “gag law” has been used by the previous government to restrict the right to protest and the media’s coverage of protests. However, there is a clear intention on the part of the new government to reform the Criminal Code and to repeal the parts that are used to undermine freedom of expression. In a separate development, far-right party VOX continues to attack media organisations and journalists. Read more  |  Read in Spanish 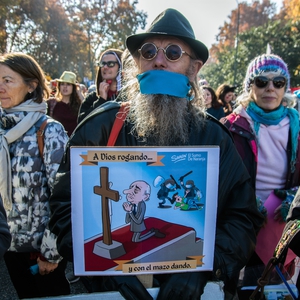 In recent months, Spain has seen several mass demonstrations for and against Catalan independence. While many peaceful demonstrations took place, police and pro-independence demonstrators have clashed on several occasions. It is reported that there have been over 600 injuries in clashes, including jouranlists. Read more 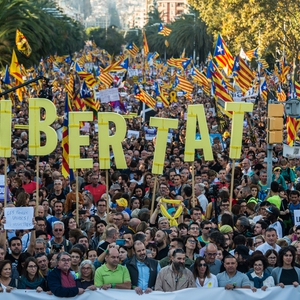 On 23rd September 2019, the police arrested nine people linked to pro-Catalan independence groups on suspicion they may have been plotting violent acts to be committed in the next few weeks. Read more 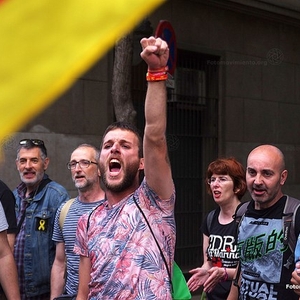