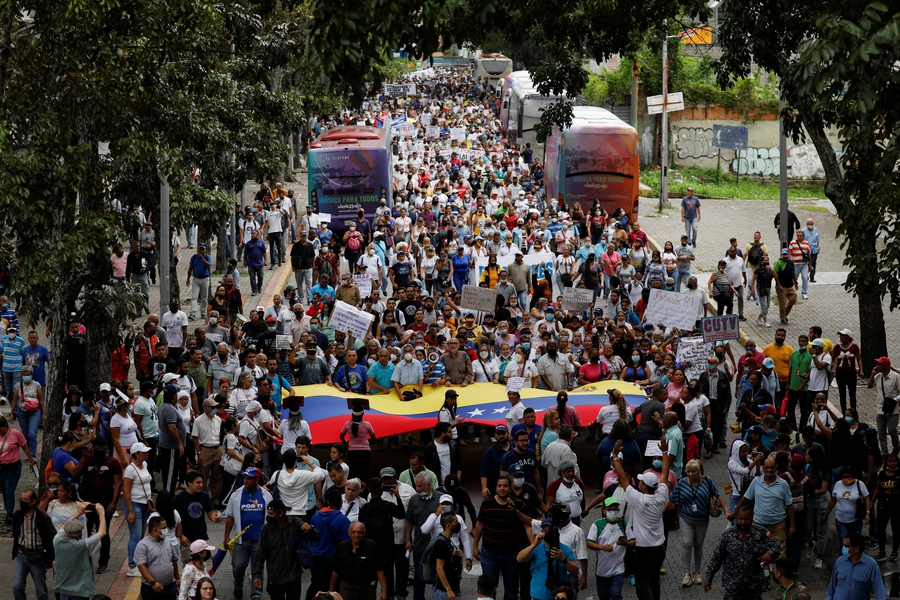 As reported by Reuters, in February 2022 local Indigenous communities issued public warnings of a “silent invasion” by criminal groups. Civil society group ODEVIDA said they had also notified authorities about Colombian armed groups operating in the area, but public institutions failed to act on these warnings.Trujillo Arana had assisted Venezuelan armed forces in operations to remove these armed groups from Indigenous lands, and had previously received threats for his activism. Indigenous organisations, civil society groups, and the Inter-American Commission on Human Rights (IACHR) condemned the Indigenous leader’s murder and called for a prompt and thorough investigation.

On 7th July 2022, unionist and humanitarian worker Gabriel Blanco was detained in Caracas. He works with vulnerable children and women victims of gender-based violence, and was previously a leader of Alianza Sindical Independiente (Independent Union Alliance - ASI). As reported by human rights organisation Provea, on 6th July officers of the General Directorate of Military Counterintelligence (DGCIM), dressed in civilian clothes and without identification or visible credentials, attempted to take Blanco to DGCIM headquarters for an interview. In the absence of a warrant, he refused to go. A few hours later, police officers arrested Blanco at his home for alleged “conspiracy” and “criminal association”. According to Provea, his charges were later changed to “terrorism” and “criminal association,” and he was placed in pre-trial detention.

In early July, five members of opposition party Bandera Roja were also detained with similar charges. On 5th July 2022, DGCIM officers arrested Emilio Negrín, president of the Federation of Court Workers. As reported by local news outlets, he was detained after tweeting about the arrest of a Bandera Roja leader who is his neighbour.

On 12th July 2022, civil society organisations Comité de Familiares de Víctimas del Caracazo (Committee of Relatives of Victims of the Caracazo - Cofavic) and the European Union (EU) announced the launch of an initiative to promote the protection of human rights defenders at risk in Venezuela. The project, Initiative for the Comprehensive and Effective Protection of HRDs in Venezuela, will include actions to promote a sustainable, integrated protection system, monitor labour guarantees, and provide legal and psychosocial support, training and urgent comprehensive assistance based on international mechanisms and standards per national and international law. The initiative, set to run until January 2025, is expected to benefit approximately 2,000 HRDs and 200 organisations.

Liliana Ortega, COFAVIC’s director, reported that from January to December 2021, the organisation documented 215 cases of violations affecting HRDs. The violations included arbitrary detentions, violations of due process, criminalisation, vilification through the state media, and raids.

In July and August 2022, public school teachers organised multiple marches demanding the full payment of their holiday bonuses, a benefit received at the end of every school year. In July 2022, teachers declared that the government had paid only a small fraction of what it owed. On 27th and 28th July 2022, they protested in front of the Ministry of Education in Caracas to demonstrate their discontent. Similar protests took place across Venezuela, often organised by local chapters of teachers’ unions. Other public sector workers also began joining the demonstrations.

On 4th August 2022, thousands of teachers and other public sector employees took to the streets again to demand decent wages, the restitution of salary benefits, as well as respect for their collective bargaining agreement. As reported by news agency EFE, the security forces prevented protesters from marching past the Ministry of Education. In response to the mobilisation, the government announced on 12th August 2022 that it would pay the bonus in full the following week. However, some unions vowed to continue mobilising to repeal a directive by the National Budget Office (ONAPRE) that would result in wage and benefit cutbacks.

In response to these protests, on 16th August 2022 hundreds of workers and government supporters rallied in Caracas to demonstrate their support for President Nicolás Maduro’s administration and labour policies.

Report on protests in Venezuela

On 26th July 2022, Observatorio Venezolano de Conflictividad Social (Venezuelan Observatory of Social Conflict - OVCS) published a report compiling information on protests in Venezuela during the first semester of 2022. The organisation recorded 3,892 protests during the first half of the year, representing a 15% increase compared to the same period in 2021. The majority of demonstrations focused on economic, social, and cultural rights, with over a 1,500 of them organised by workers demanding living wages. In total, 52 protests were obstructed in 14 states, with a total of six protesters detained.

In July 2022, civil society group Espacio Público recorded 15 attacks and 28 violations of freedom of expression in Venezuela. Censorship represented 46% of violations, totalling 13 cases. At least five radio stations in Cojedes were shut down by the state regulating agency Conatel, which claimed the station did not have the required licences to operate. The stations had applied for licences and submitted the corresponding documents; however, most radio stations were awaiting a response from Conatel. There were also cases of harassment and intimidation. For example, on 27th July journalists Nayari González, Mireya Moya, and Juan Carlos Gimón were harassed by Portuguesa police while attempting to record the closure of shops in Acarigua-Araure. Police officers allegedly threatened Moya with arrest and surrounded her, which led her to leave the site. Public officials also reportedly forced González to delete material she had recorded.

On 29th July 2022, IACHR’s Office for the Special Rapporteur for Freedom of Expression condemned the increase in censorship against journalists in Venezuela and reaffirmed its support and commitment to the full observance of press freedom in the country. The organisation said they had documented a persistent hostile environment for journalistic work in Venezuela, with cases of harassment, persecution, arbitrary arrests and stigmatisation against media workers. In addition, the IACHR also highlighted cuts in internet service, deliberate blockades against news portals and other digital platforms, closures of media outlets, as well as the seizure of their equipment. These measures, the organisation said, increasingly limit people’s access to reliable information from independent sources and have generated zones of media silence and a general atmosphere of self-censorship among both the public and the press reporting on issues of public relevance.