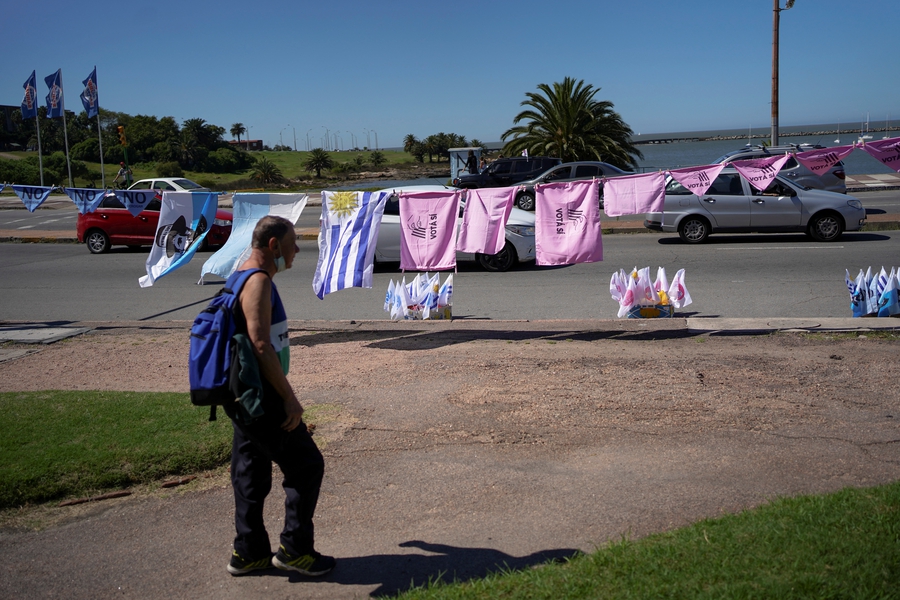 Man passes by flags for 'Yes' and 'No' referring to referendum on the LUC. 27 March 2022, REUTERS/Mariana Greif .

On 3rd May 2022, civil society organisation Centro de Archivo y Acceso a la Información Pública (Centre for Archives and Access to Public Information - CAinfo) published their 8th Report on Journalism and Freedom of Expression in Uruguay, detailing restrictions and violations of freedom of expression between the beginning of April 2021 and the end of March 2022.

The report shows a backsliding of freedom of expression in the country, with an increase in violations for the third consecutive year. In 2021, CAinfo registered 69 cases; the most frequent violations were judicial harassment, access to information restrictions and stigmatising discourse or smear campaigns. In the majority of incidents (48), public officials or state bodies were responsible.

Also on 3rd May 2022, in a conference marking World Press Freedom Day, a delegation of the Asociación de la Prensa Uruguaya (Uruguayan Press Association - APU) presented a report on the country’s situation to Pedro Vaca, the Inter-American Commission on Human Rights (IACHR)’s Special Rapporteur for Freedom of Expression. APU also delivered a letter to the IACHR requesting a public hearing to analyse the country’s freedom of expression situation, denouncing a context of “hostility, discrediting and accusations” against journalists and news outlets by “government spokespeople.” In particular, the organisation highlighted concern at the recurrent hostile attitude expressed by ruling party senator Graciela Bianchi.

Uruguay fell from 18th to 44th place in Reporters Without Borders’ World Press Freedom Index, despite the organisation’s analysis that the country’s “political climate encourages constructive and inclusive dialogue on the media’s role in national life.” However, the 2022 analysis said that “recent years have seen many cases of political pressure – involving members of the presidential staff – against journalists who have covered controversial issues.” There have also been cases of threats, intimidation and judicial pressure against investigative journalists.

Uruguay’s Minister of Education and Culture, Pablo da Silveira, said in response to the report that “Uruguay does not have a press freedom problem. Reporters Without Borders has a problem with its methodology.” Speaking to news media, the Minister criticised the assessment and said that “there are countries that are above Uruguay in the ranking where journalists die.”

Reporters Without Borders responded to these statements on social media, explaining that the methodological changes were aimed at evaluating the exercise of freedom of the press while taking into account contextual considerations. In the specific case of Uruguay, the organisation said a new economic indicator negatively impacted the country’s performance. This new indicator analyses economic restrictions on press freedom related to government policies (complexity of setting up an independent media, state aid), advertisers and media owners. The group also underscored that factors such as “difficulty of access to information, judicial processes and intimidation of investigative journalists, especially by political actors” also contributed to Uruguay’s score in 2022.

On 1st March 2022, the president of Uruguay’s government-owned telecommunications company ANTEL announced that Vera TV, their streaming service, would suspend the broadcasting of channel Russia Today (RT). He justified this decision on social media saying that the channel was at the “service of propaganda and justification of Russia’s violent military invasion of Ukraine.”

Press association APU’s Board issued a statement condemning this as an “inadmissible act of state censorship of an international media outlet.” Legislators of the opposition coalition Frente Amplio also requested a report on the decision. Parliamentarian Javier Umpiérrez called it a “trampling of freedom of press, rarely seen” under Uruguay’s democratic system.

On 8th April 2022, a legislator with Partido Colorado introduced a bill to include provisions in the Penal Code sanctioning “digital violence”. The bill proposes adding an article in the Law of Misdemeanours to establish penalties for anyone who “through the use of any digital media, incurs in the ridicule, threats, blackmail, discrimination, defamation and/or slander towards another individual or legal person or public or private institutions.” The misdemeanour would lead to one to three months of community service.

The former IACHR Special Rapporteur for Freedom of Expression, Edison Lanza, commented on Twitter that “the bill presented is dangerous for freedom of expression in Uruguay and unproductive.” Lanza argued that the terms used in the project are vague and ambiguous, enabling their use to punish anything from humour to corruption allegations. He said such legislation would lead to internet censorship and would contradict current legislation in Uruguay as well as international standards.

Gustavo Gómez, director of the Latin American Observatory of Regulation, Media and Convergence (Observacom), also said that the bill was inadequate, disproportionate and unnecessary. For instance, with the term ‘ridicule,’ “anyone making an ironic meme about a politician or engaging in political or sporting satire could be liable to be prosecuted and punished, even if it is not a crime.”

Sudestada & Fabián Werner v. Google, Dec. 2021| A Court of Appeals in Uruguay declared that Courts did not have jurisdiction to decide on a case where Google applied the right to be forgotten under European Law against a local media outlet & a journalist https://t.co/2VrlXE6vjZ

As reported previously by the Monitor, in November 2021 Google removed two articles published by digital media Sudestada from their search results. At the time, a Uruguayan Court of Appeals found that they did not have jurisdiction to rule on the case because Google had acted in compliance with a foreign law. The Court also said the company’s actions had not entailed a restriction to freedom of expression or press.

In March 2022, Columbia University published an analysis of the case. The university’s study said “the first case in Uruguay that analyses the responsibility of large internet companies” set a “regressive precedent by rejecting the jurisdiction of companies without residence in the country.” In their analysis, Columbia University said:

“The judgment discourages future claims against internet platforms even though the persons find themselves harmed due to foreign laws.”

On 27th March 2022, Uruguay held a referendum on repealing 135 articles of the Law of Urgent Consideration (LUC), an omnibus bill promoted by the Lacalle Pou government in 2020. As previously reported by the CIVICUS Monitor, the referendum was the result of a national campaign by unions and social organisations to convene it. The LUC, which contains a number of regressive reforms impacting public health, education, housing, employment and security, has recently enabled police to repress protests that restrict transit.

With a narrow margin, voters saying “no” to repealing the 135 articles of the LUC prevailed. About 2.3 million people participated, with 47.3% voting for “no” and 46.3% for “yes.” The campaign coalition Comisión Nacional por el Sí (“National Commission for Yes”) recognised that there were not enough votes to repeal the articles, but said that despite this the referendum was a fundamental moment for democracy and “achieved a very important expression by citizens.”

A parliamentary commission said it had identified alleged administrative irregularities involving members of teachers’ union Federación Nacional de Profesores de Enseñanza Secundaria del Uruguay (National Federation of Secondary Education Teachers of Uruguay - FENAPES). The commission was created by governing party legislators in 2021 over a controversy regarding a union leader’s leaves of absence. Eight union leaders and members were named in the commission’s resolution, which will be analysed by the Chamber of Deputies and could eventually lead to criminal proceedings.

In a press conference on 26th April 2022, FENAPES responded to the commission’s allegations, saying that its objective was to delegitimise the teachers’ union and that the national government was carrying out politically motivated anti-union persecution. The union called on legislators in the Chamber of Deputies to reject the proceedings arising from the commission “as they are the result of blatant and gross illegality.”